Celebrate The Start of the 2021-22 NHL Season with 2 Free e-Pack Promotional Sets!

Are you ready for the start of the 2021-22 NHL season? The sound of the skates on the ice. That electric energy from cheering fans. That feeling when your favorite team scores their first goal.

To celebrate the return of hockey during the NHL Face-off, we have created two FREE promotional e-Pack sets that you can start collecting today. If you’re new to Upper Deck e-Pack, buy, open, collect and trading digital and physical cards with fans around the world. It’s free to sign up! 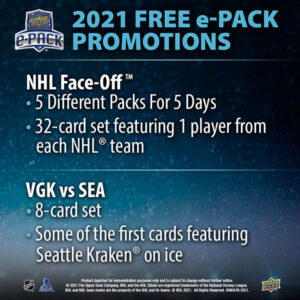 Skate into the hockey season with five new exclusive trading card packs featuring superstar players from every team across the league. The 32-card set showcases 1 player from each NHL team. The first pack is available starting today, and new free packs will be released every day from now through October 16.

All five packs will be available until October 22 at 11:59pm PST at

Collect some of the first-ever on-ice Seattle Kraken cards featuring star players from the newest NHL expansion team, along with fan-favorite players from the Vegas Golden Knights. The 8-card set celebrates the first game of the season, but more importantly, the Kraken’s highly anticipated official debut.