In the hobby of collecting cards, the term “pc” refers to a “player collection” or “personal collection.” Many hockey fans pc certain players because they love seeing what they do on and off the ice so having as many different cards for those players brings a lot of satisfaction and enjoyment. Such is the case for Chris Prior who recently had an interesting chase come to a happy ending. Here’s his story:

“Where do I start? As a child I loved cracking open those first packs of 1990-91 Upper Deck NHL. Even in my small town of Marystown, NL in Canada, we had a small card show every Sunday. My buddies and I would rip those packs, wheel and deal, then go home and compare what we had. It was always the chase that was fun. That is the purest form of this hobby.

“I never seemed to walk away from it. Even as a teenager I always seemed to get drawn back into collecting. Then in the late 90’s I remember watching Roberto Luongo in the World Juniors and was fascinated with his style of play, and being a fellow goalie, he instantly became my favorite player. I still remember getting those first few RC’s of him and I was hooked! 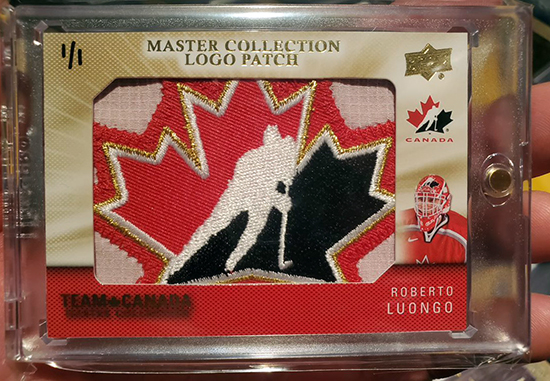 “Becoming a player collector wasn’t always my goal, but soon I realized I was surpassing 50% of his cards, and figured, why not? Just go for it! Try and get every single card ever made of him. Obviously this was a very steep goal, and one I will likely never fulfill, but I have come close. Which I guess leads me to the whole reason for this post; the card that got away from me. Well, almost.

“In 2006 I was closer than ever to getting every non 1-of-1 card of Luongo. I think I was hovering around 90%. I sold everything that was non-Luongo and used the funds to buy as much as I could. During this time I had a chance to acquire a card that, at the time, would be my Holy Grail; the 2005-06 UD Ultimate Auto Shield 1-of-1 card. Without hesitation I pulled the trigger and there it was; the baddest card in my collection. 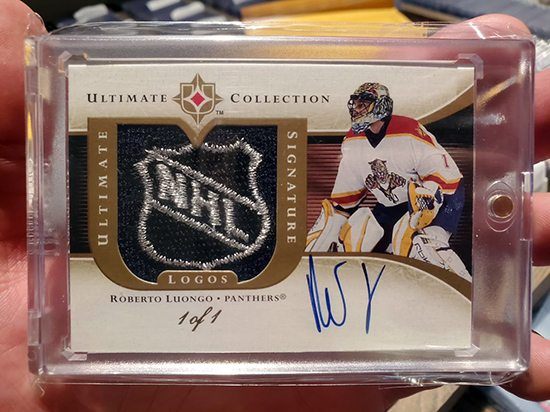 “I often struggled with the concept of 1-of-1 cards. I mean, you could never have them all! So fast forward a few months and I was contacted about selling the card at almost double of what I paid for it. I figured I would use the cash to get a ton of rare Luongo’s I needed, which I did, but that instant regret sank in. I couldn’t believe I moved it. In 25 years of collecting Luongo I have never moved a single card, yet I sold this center piece of my collection. Regret sank in and I was focused at getting it back.

“After several failed attempts at reacquiring the card, often years in between it when it would surface again, I figured it was time to move on… That was until last week.

“On three separate occasions I almost had a deal for it, but it never panned out. And then, out of nowhere, I get a message from a guy on Facebook and another from a guy on Instagram that the card was up and for sale again. This time I wasn’t going to let it go. For 15 years I searched high and low for this card. I had three failed efforts to get it back with countless hours haggling and trying all I could to get it. No matter how hard I tried I couldn’t reacquire this card. Then out of the blue, like it was meant to be, here it is, back in my Luongo collection, but this time it’s locked away for good! 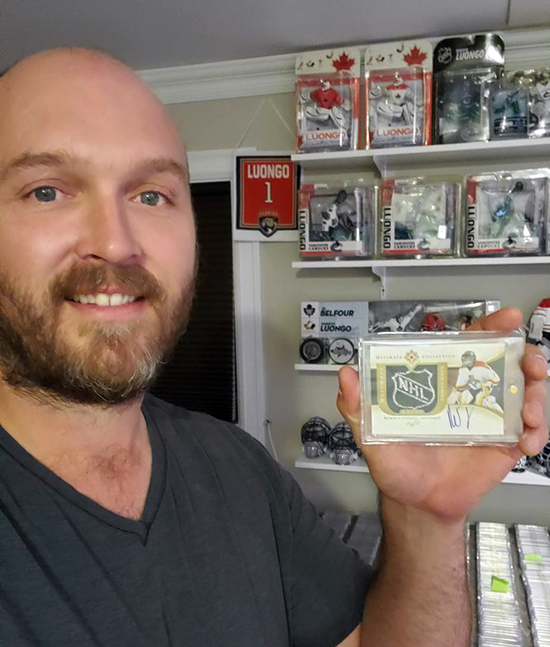 Chris was able to get his white whale back! Congratulations Chris!!!

“Currently I am chasing a goal of 3,000 unique Luongo cards, and I’m just a couple hundred short. My attitude on 1-of-1 cards has changed since 2006, and I’m currently sitting at 63 unique 1-of-1 cards. I have a few favorites, but honestly, nothing will compare to this 2005-06 Upper Deck NHL Ultimate Shield card. Anyone who is a true collector, who spends hours each day just for the chase, knows exactly what I mean. I’ll soon be 40-years-old, and I’ve been collecting for 30 years, and my most satisfying moment in collecting happened last week when I finally got this card back in my collection!

“Recently I have been trying to make more of an impression on social media, showing of maildays, rainbows of certain sets, etc. It has brought new life into my collecting habits, especially since Luongo has retired. If you are interested in following here are my handles!”

Thanks to Chris for sharing his story! His collection is LEGENDARY! Check it out: 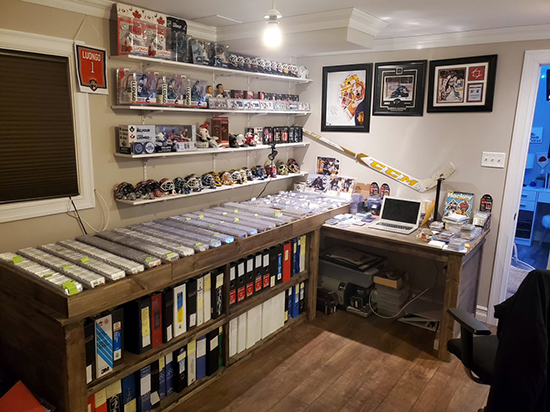 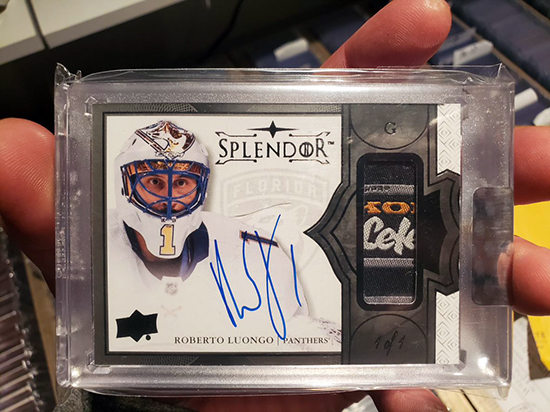 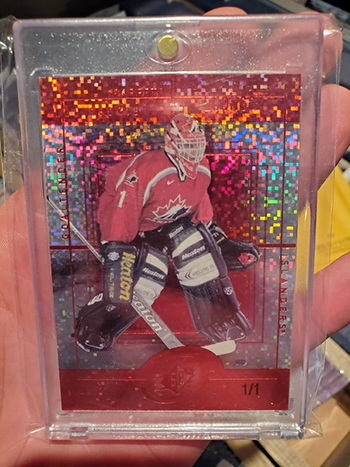 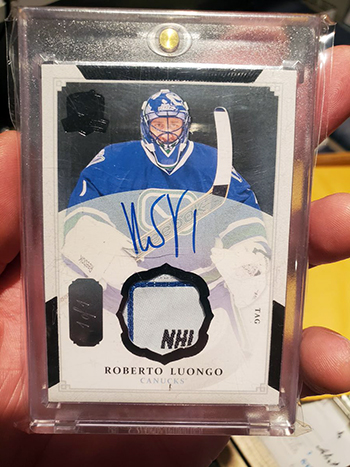 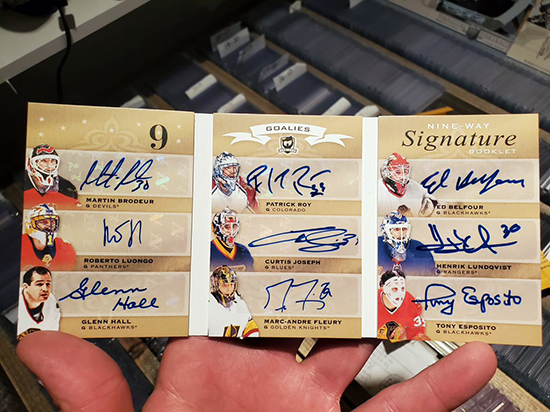 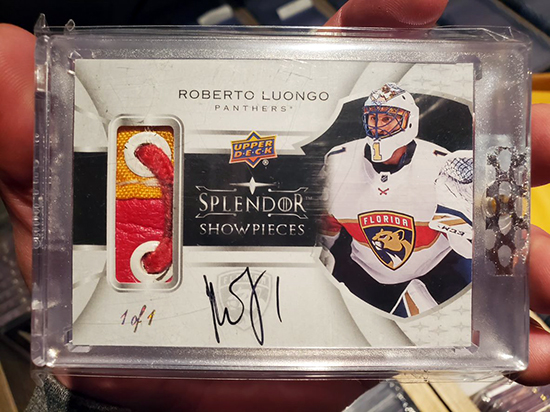 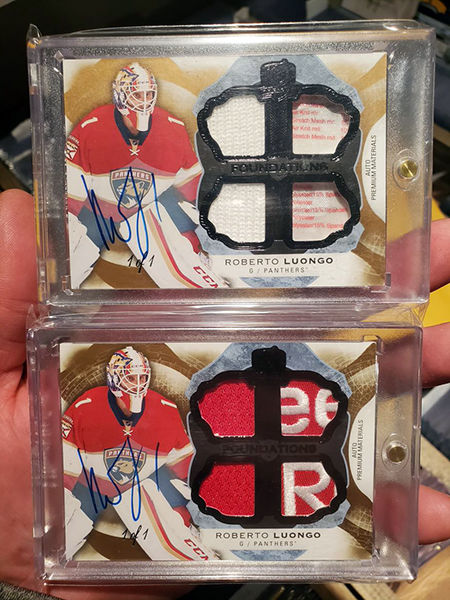 We appreciate his passion and we’re happy to hear he was able to find that elusive 1-of-1 card! Have you ever chased down a card you regretted selling or trading? Share what happened in the comment section below!