Legendary: Annihilation – This new expansion raises the stakes. Don’t worry, only the fate of the universe lies in the balance.

Annihilus, Lord of the Negative Zone, is bringing war to the cosmos. At the head of his vast armada, the Annihilation Wave, he brings only doom and destruction. It seems all is lost! Can anything resist such immense power? Surely, the forces of the universe must stand together to defeat this threat or face conquest and total annihilation!

Let’s begin this preview for, Legendary®: Annihilation with some familiar keywords. So let’s take a look at our first returning keyword, Focus.

The popular “Focus” keyword lets you transform your Recruit Points into powerful, flexible effects. It has only ever appeared in the original Legendary®: Fantastic Four set back in 2013. Some Hero cards say things like “Focus 2 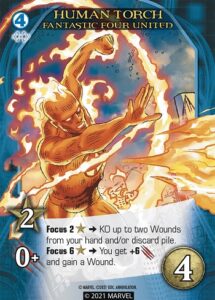 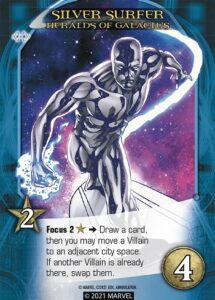 The next keyword is Man and Woman Out of Time which we first saw in Legendary®: Captain America 75th Anniversary expansion in 2016. It represented heroes returning from the past. Now the keyword represents the ability to return from the future. What better examples than the children of Mr. Fantastic and the Invisible Woman, Franklin and Valeria Richards.  Franklin manifested reality-warping powers, moving through timelines and dimensions with ease. He is now known as the powerful Psi-Lord His sister Valeria had her life saved as a child by Dr. Doom, who guided her intellect. She has also returned through time as the teenage Brainstorm, combining Mr. Fantastic’s intelligence with Dr. Doom’s cunning.

Man and Woman Out of Time 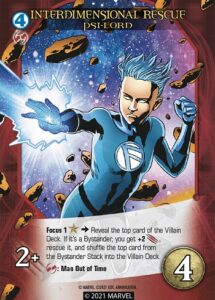 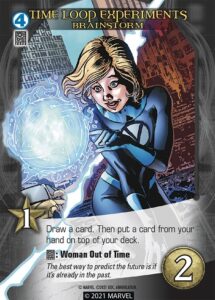 Great to see the blogs back for Legendary! Please keep them coming!
Looking forward to getting this expansion, it looks really interesting.

Really looking forward to this set and seeing the focus keyword again!