Welcome to our last preview of our upcoming Legendary release, Annihilation. Thank you for your continued patience as we get this awesome expansion out to you.

Let’s take a quick look at a couple of the new schemes in Annihilation! 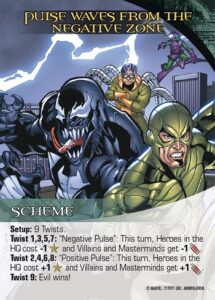 It was from the Negative Zone that Annihilus begins his systematic destruction of the galaxy. This literally begins a war of survival between the Positive, the Milky Way Galaxy and the negative, the Negative Zone. But who will prevail? The Heroes must learn to strike when an opportunity presents itself. Will you be able to overcome Annihilus and his seemingly unstoppable wave of destruction before it is too late? With this scheme timing is everything. 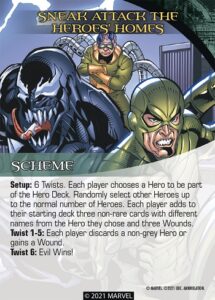 The Annihilus struck suddenly and took the fight to the very doorsteps of his enemies! The heroes fought gallantly but the struggle was long and hard. Often, all seemed lost as they were drained of power. Sometimes they doubted their will to continue the fight. But surrender was not an option because surrender meant annihilation! My favorite thing about this scheme is that it takes those familiar starting hands that we all know so well and gives them both strength and weakness simultaneously while at the same time giving the players a single hero that they can identify with. I enjoyed the interesting twist. I think you will too!

Now I’ve saved my favorite part of this new expansion for last! In the Marvel comics storyline “Annihilation,” Annihilus leads his vast Annihilation Wave of alien warships from the Negative Zone to devour the galaxy. But he has also harnessed the power of one of the most powerful beings in creation: Galactus himself. In this new expansion our very talented game designer, Devin Low, has come up with a great way to represent the vast power of Galactus and in the process has come up with yet another extremely interesting twist in gameplay. You will have to be careful or…

Two Galactus cards in this set can destroy city spaces. If a city space like the Rooftops is destroyed, act as if that city space no longer exists. If the city is ever completely destroyed the game is over! Galactus has consumed the Earth and evil (and possibly you) wins! 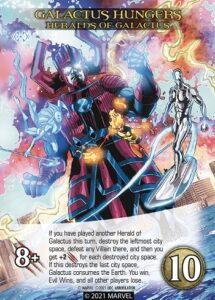 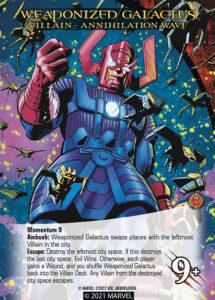 That’s it for our previews of Legendary®: Annihilation. Hope you’ve enjoyed them and you are as excited as we are about the introduction to Legendary of one of the most powerful foes in the Marvel universe, Annihilus! Not to mention the exciting addition of Galactus and his Heralds as well as the next generation of Marvel’s first family, Psi-Lord and Brainstorm to our fantastic list of Legendary heroes!