Welcome to the second and final preview for the Secret Avengers Issue for the Civil War Arc for Vs. System 2PCG!

This Arc features various heroes and villainous heroes featured in the Marvel Comics Civil War story. After innocent civilians have been caught in a superhuman crossfire, the United States government attempts to identify and register all super-powered residents. But not everyone agrees with this plan. Iron Man and Captain America find themselves on opposite sides of the dispute as we come to the ultimate battle over right and wrong – MARVEL’s Civil War!

) team led by Steve Rogers’ Captain America. Both teams are well represented in the 200-card The Civil War Battles Issue, and the Secret Avengers Issue sheds some more light on Captain America’s team of rebels.

Last time we looked some more at super powers and cards that dealt with them. But those aren’t the only powers the Secret Avengers possess! 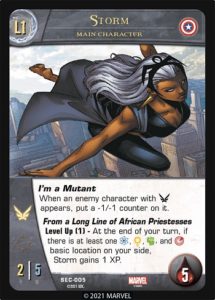 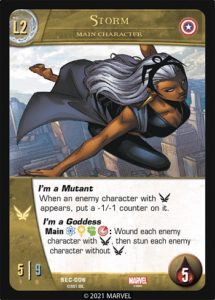 OK, OK. So she has a super power on her Level 2 card. But she also has I’m a Mutant in both levels! Note that enemy main characters don’t “appear” at the start of the game, so it won’t work on them. 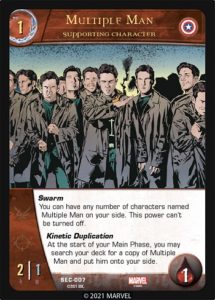 That is many men! Here is another: 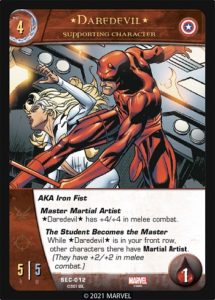 A couple of things to note here: the *s and the AKA Iron Fist. Please see the rules sheet for more details on these, but basically it means “*Daredevil*” is an entirely different character than “Daredevil” (because *Daredevil* is Danny Rand, but Daredevil is Matt Murdock).

Our next Secret Avenger uses his words to great effect! 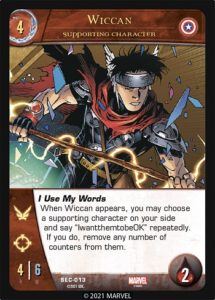 Like Kingpin from the last preview, he can remove any number of any types of counters.

While Wiccan is very much a team player, you could say our next character is not… 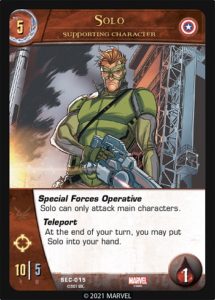 Our last preview for the Issue is a really fun one that comes with a real choice. 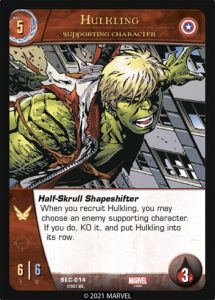 First of all, Half-Skrull Shapeshifter only works when he is recruited (not if he appears some other way).

Second, because it says “you may”, it is a choice: you can recruit him to your side as normal if you prefer.

Third, if you do choose to use this power, you still own Hulkling (so when he is KO’d he will go to your KO pile, for instance), but the enemy player now controls him. Yes, he is going to start attacking your characters! So choose to use his sneaky power wisely.

Thanks again for reading and join us next time as we take a look at the reinforcements for the Pro-Registration side in the form of the Thunderbolts!

The war continues, get your copy of the Vs. System 2PCG: Secret Avengers game on the UpperDeckStore.com!