Collectors Win No Matter Who Wins The Calder Trophy

The Calder Trophy is an award that NHL fans pay close attention to, especially collectors who are looking for the season’s top rookies. With the game skewing as young as it is, collectors have made the award more popular. Once the winner is announced, the recipient’s trading cards become highly sought after. Recent winners who are very popular in the hobby include Cale Makar (2020), Elias Pettersson (2019), Mat Barzal (2018), Auston Matthews (2017), and Artemi Panarin (2016). That’s a lot of talent and this year’s crop is no different. 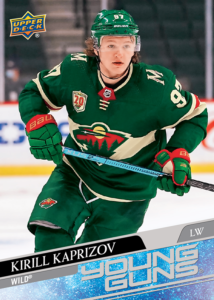 Kirill Kaprizov is an extremely talented right wing who first starred in the KHL. The only reason he’s an older rookie, at 24, is his passion to play professional hockey at the highest level in Russia. The phenom did that for the last six years, most recently with CSKA. He was a five-time All-Star who scored 230 points in 293 games.

Kaprizov was drafted in the fifth round in the 2015 NHL Draft and most likely would have been selected much earlier, but teams knew the wait for him would take a while. But as they say, good things come to those who wait, and Minnesota Wild fans appreciated him the minute he stepped foot on North American soil for training camp.

He is a goal scorer (27) and a playmaker (27 assists). Even in a shortened season, he shattered the Wild’s rookie scoring record of 18 goals and 36 points, previously held by Marian Gaborik. Kaprizov led all rookie scorers in points and goals and is favored to win the award. 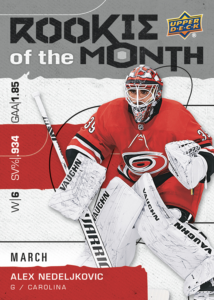 Alex Nedeljkovic is a talented goaltender who plays for the Carolina Hurricanes. Goalies don’t come out of nowhere, as it takes many of them years to perfect their craft. Being a goaltender is an extremely tough position, and the jobs are limited. That combination often means most goalies get their big break around the age of 23-25. At 25, you’re mentally ready, and now he just needs to get more games in at the NHL level.

Nedeljkovic was drafted 37th overall in 2014 by Carolina, but the Hurricanes brought him along slowly. The Ohio native spent his minor league days in Michigan, playing for the Plymouth Whalers in the OHL. There, the young netminder was able to participate in the Winter Classic when it was held at Comerica Park in Detroit.

In 2013-14, he was a part of the U.S. National Team Development Program. So many great players have played there. His teammates at the time were Jack Eichel, Auston Matthews, Dylan Larkin, and Alex Tuch to name a few.

In 2018-19, Alex Nedeljkovic was the best goaltender in the AHL. He was an All-Star, he had the best goals against average, and he had the most wins with 34. The talented netminder subsequently won the Baz Bastien Memorial Award, as the best goalie in the league, and his team won the Calder Cup making him a champion. For the next few years, small opportunities were given to him at the NHL level until the 2020-21 season rolled around.

When the opportunity arose, this backstop made the most of it posting a 15-5-3 record with a 1.90 goals against average, and a stellar .932 save percentage with three shutouts. He was the main goalie in the playoffs, and he’s the current #1 goalie in the organization. 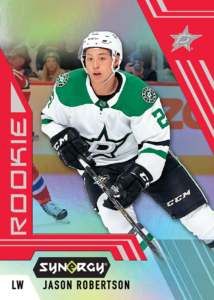 Jason Robertson is a young power forward who has progressed quickly through the Dallas Stars system. The 6-3, 210-pound left wing has great hands, and when he’s around the net, good things happen. The Stars knew that when drafting him 39th overall in the 2017 NHL Draft.

Robertson has a story that’s different from a lot of players in the NHL. The Arcadia, California native had reached a level that couldn’t be matched in the area to challenge the young hockey player. Thus, the family picked up and moved to Michigan in 2010 so Jason and his brother Nick, 53rd overall pick by Toronto in 2019, could get better and have a chance to reach another level. The Robertson’s are Filipino-American; only Matt Dumba (Wild) is the only other current NHL player with Filipino ethnicity.

In 2018-19, Jason played in the CHL for the Kingston Frontenacs and Niagra IceDogs. He received a lot of attention by scoring 117 points and 48 goals between the two teams that season.

After scoring 25 goals in the AHL during the 2019-20 season, he looks as if he might be ready for the NHL. The Stars had him up for three games, and he traveled with the team in the bubble as the Stars made a run for the Cup, losing to the Tampa Bay Lightning in the finals.

Robertson worked hard in the offseason and it showed as he ended up with 17 goals and 45 points in 51 games for Dallas. He played his way into Calder consideration and collectors are getting his cards along the way.

It’s never too late to collect these top rookies. Collect them at your local hobby shop, from our Authorized Internet Retailers (AIRs), or on UpperDeckEpack.com, our patent-pending online platform that allows collectors to buy, open, collect and trade digital and physical cards with fans around the world.