Welcome to the final preview for the Civil War Arc for Vs. System 2PCG!

By now, you remember we’re calling this Civil War Battles Issue “The Best Place in the Multiverse to Learn How to Play Vs. System 2PCG!” The entire product, from the iconic MARVEL characters and story, to the revamped rulebook, to the design and development of the cards, has all been created with this goal in mind! The cards are simple, but don’t worry, they’re still powerful, flavorful, and fun! So, if you’ve been curious about the game, this is the place to start!

Today we are going to look at a single character, who has a revelation during the conflict after some soul searching and switches sides because of it: Spider-Man!

First, we’ll look at how Peter first joins Tony Stark’s Pro-Registration forces, even going so far as revealing himself to the world. 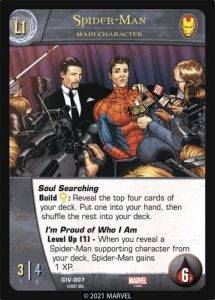 He’s rewarded for his choice and his loyalty to Tony by getting a new suit! 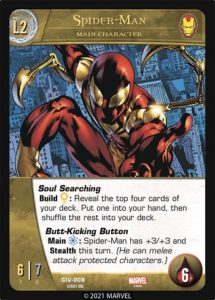 That’s a good button to have! You’ll notice however, that even at Level 2, he is still Soul Searching… 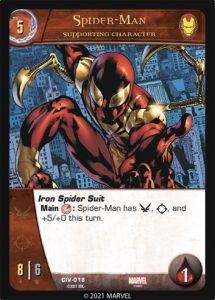 Eventually, Peter has a change of heart and heads over to join Cap with the Secret Avengers, back in his classic costume! 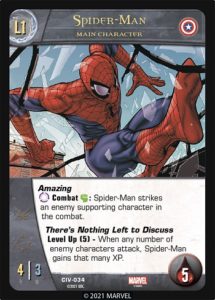 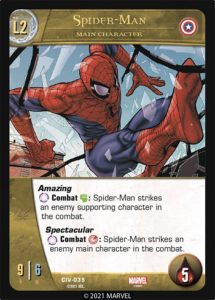 Remember that for his Level 1 Amazing super power and his Level 2 Spectacular super power, when he strikes the enemy character you choose, they do not get to strike Spider-Man (this is a separate strike from the strikes that happen when a combat resolves).

We will leave you today with our last Spider-Man card in the Issue, the simple, classic, Spider-Man! 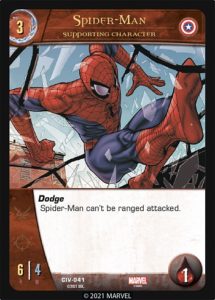 Thanks for joining us again today, and we hope you enjoyed a deeper look into the web-slinger’s cards!

Join us next time for a look at more from the second Issue called, well, it’s a Secret!


I cannot wait for these!
My friend is not gonna know what hit him!