The recent release of 2020-21 Upper Deck NHL®  Series 2 has been well-received by collectors in hobby shops, at retail and on UpperDeckePack.com due to the presence of a Young Guns card featuring Minnesota Wild phenom Kirill Kaprizov. 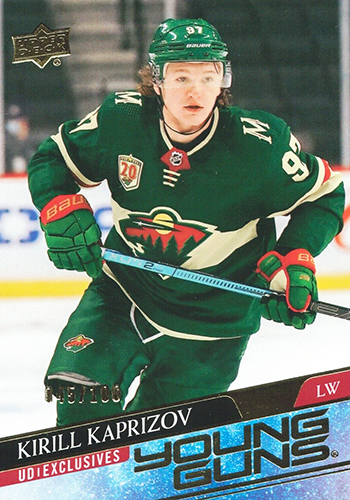 After breaking the franchise record for most points by a rookie, set by Marian Gaborik during the 2000-01 season, Kaprizov is considered by many to be the prime candidate for the Calder Trophy. However, this release features many Young Guns who are worthy of a place in any hockey card collection.

Let’s take a look at the early cards featuring players you will want to acquire before they take off.

The hard-luck Buffalo Sabres have seen some improvement in the latter stages of the 2020-21 campaign, and their dedicated fans have plenty of praise for their top center ice prospect, Dylan Cozens. 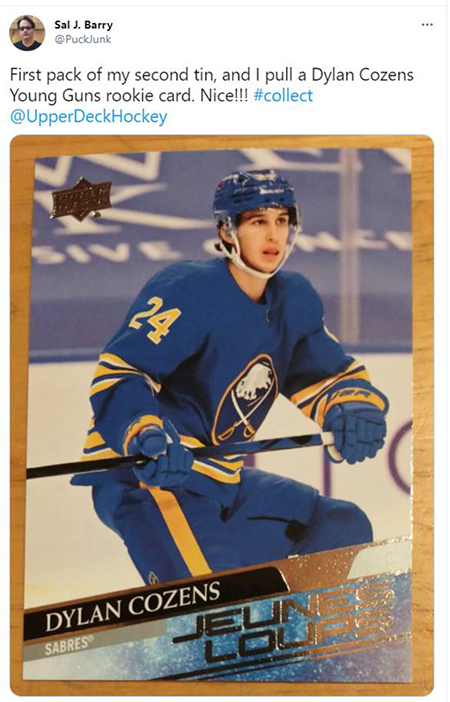 Despite missing a little time in February due to injury, scouts have praised his two-way play and playmaking abilities. Before making his NHL debut, he was a dominant force as Canada’s captain at the 2021 World Junior Championship. During tournament action, he led all scorers with eight goals and went home with a silver medal.

In his fifth appearance with the Sabres, the seventh overall selection in the 2019 NHL Draft lit the lamp for the first time in a shootout loss to Washington. In his next game against the New York Rangers four days later, he scored again on the power play to help Buffalo to a 3-3-1 start. His future with the Sabres is bright and grabbing his rookie cards now may prove to be a smart decision as his development continues.

While the New Jersey Devils have also had their fair share of struggles this season, there is a ray of hope on their blue line thanks to the strong play of rookie Ty Smith. 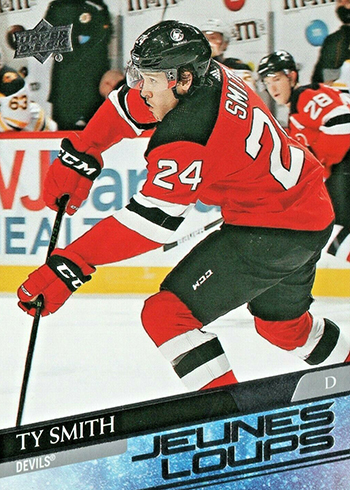 The NHL’s overwhelming leader in assists and points for first-year defenders, Smith averages over 20:00 of ice time per game. A first-round pick (17th overall) in 2018, he piled up plenty of awards during his junior days with the Spokane Chiefs – including consecutive Bill Hunter Trophy nods as the WHL’s Top Defenseman.

A great deal of Calder Trophy buzz tends to focus on Kaprizov and Jason Robertson of the Dallas Stars, but some voters are certain to make a case for Islanders netminder Ilya Sorokin. 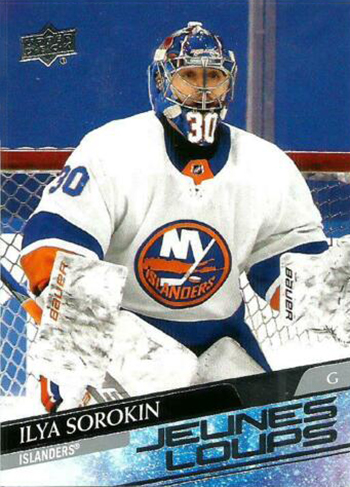 Like Kaprizov, the wait for Sorokin’s arrival was a long one. Drafted back in 2014, he was a third-round steal (78th overall) that gave incredible performances with the KHL’s Red Army club which included a Gagarin Cup title in 2018-19. His trophy case was already bursting when he finally signed on with the Isles. As the backup to Semyon Varlamov, he delivered a 12-5-1 record over his first 18 games. On February 16, 2021, Sorokin earned his first victory with a 20-save shutout against the Buffalo Sabres. He blanked the Pittsburgh Penguins in his next start 12 days later. These victories were part of an eight-game winning streak and he earned 12 wins over a 15-game span. Goalie collectors rejoice!

The Vancouver Canucks have had a difficult season due to most of their players battling COVID-19, but Hoglander’s contributions on the ice have captured the imagination of fans. At just 20-years-old, he can bring a crowd to its feet with ease and won back-to-back SHL Goal of the Year honors in Sweden while skating for Rogle BK. 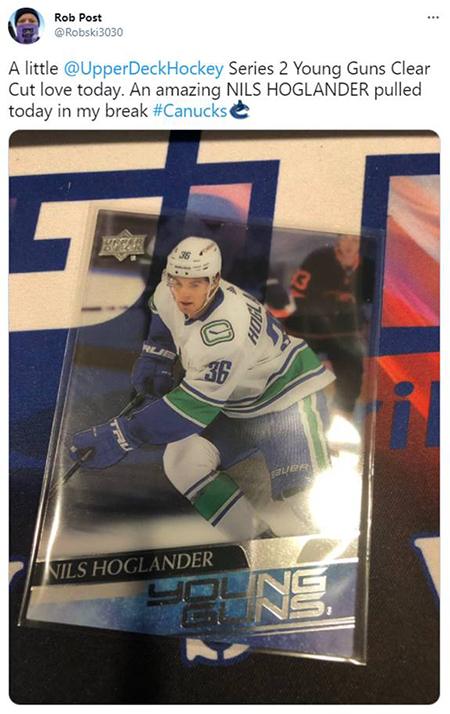 Taken 40th overall by Vancouver in 2019, Hoglander made an immediate impression during his debut against the Edmonton Oilers on January 13. At 17:19 of the second period, he scored to break a 1-1 tie and the Canucks eventually rolled to a 5-3 win. As his club returned to action on April 18, his tally helped in the effort during an emotional triumph over the Toronto Maple Leafs.

The New York Rangers are loaded up with some incredible young talents and Miller has been a fantastic fit on their back end. A standout at the University of Wisconsin, the 2018 draftee (22nd overall) delivers at both ends of the ice. 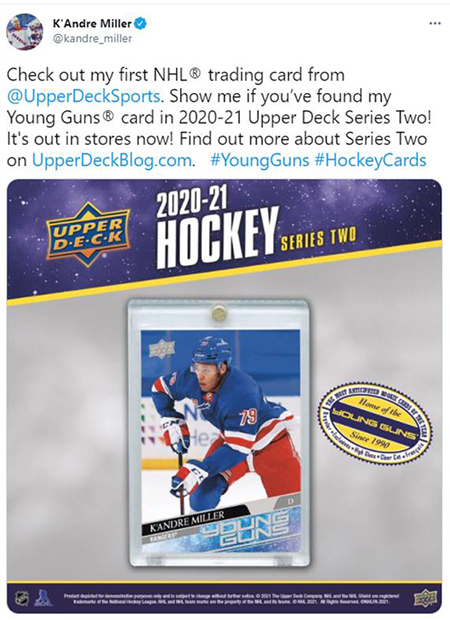 After 45 games, he had a respectable plus-minus rating of +11 with 11 points to his credit. On January 30, he recorded a pair of assists against Pittsburgh for his first career multi-point game. In time, he could be a real force on the blue line.

Senators fans could not have asked for a better introduction to Stützle than when the late Alex Trebek announced that Ottawa was taking the young German sensation with the third overall pick in the 2020 NHL Draft. He generated some buzz by starting the season strong with four goals in his first 10 games and several multi-game point streaks. 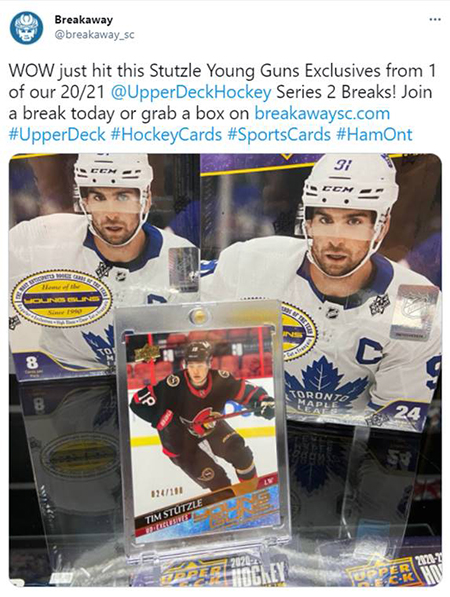 With the potential to be a true game-breaker, Stützle can skillfully handle the puck and outsmart opponents. His potential seems huge at this point, and while it is not always wise to call a rookie a “can’t miss” player, he will get every opportunity to prove it.

Even as the Chicago Blackhawks are transforming while the core players from earlier Stanley Cup victories move on or face retirement, the team has managed to make smart picks in the NHL Draft  and sign promising talent which will foster more success down the road. 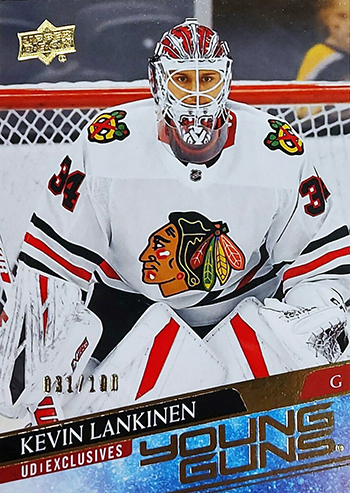 The arrival of Kevin Lankinen as the team’s starting goaltender was seen as inevitable by many fans after Corey Crawford moved on. His progression through the ECHL and AHL prepared him for the NHL ice wars, and he has performed admirably while facing a barrage of rubber in the crease. After 36 games, he had a respectable 16-13-4 record and recorded the third-most saves in the league to go along with a pair of shutouts. 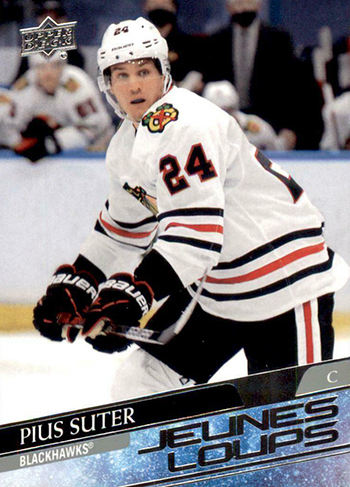 Another player the Blackhawks picked up off of the free-agent market is Pius Suter. Following a 2019-20 campaign where he led the Swiss league in goals and points, Suter earned Most Valuable Player honors and NHL clubs were falling over themselves to secure a deal with him. Suter’s transition to the North American game was rather seamless (he had previously seen action in the OHL) and his 23 points were fourth on the Blackhawks after 49 games. On January 24, he posted his first career hat trick in a victory over Detroit.

There are some other Blackhawks prospects with Young Guns cards in Upper Deck Series 2 that warrant some attention. Ian Mitchell and Mackenzie Entwistle are hoping to catch on with the club in the long run and could be sleeper picks for collectors.

The up-and-down season for the Montreal Canadiens has seen exciting highs and disappointing emotional valleys for their fans. Heading into 2020-21, there was a lot of optimism about the future of Alexander Romanov, the 38th overall in 2018. 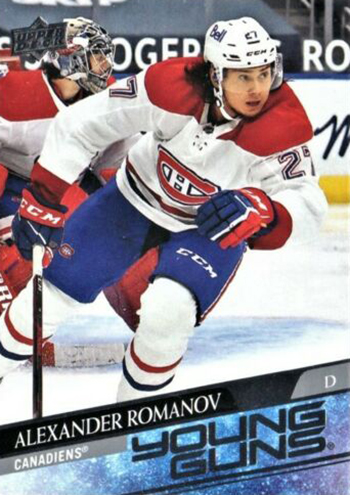 A Gagarin Cup winner in the KHL and a two-time medallist at the World Junior Championship with Russia, his first season has been somewhat of a baptism under fire as the Habs look to secure a playoff spot. Offensively, he is not going to typically post a lot of points, but his defensive abilities are promising – especially when it comes to throwing hits and blocking shots. Additionally, he has plenty of hockey history coursing through his veins as his grandfather, Zinetula Bilyaletdinov, was a former captain for Moscow Dynamo and represented the Soviet Union during international events in the 1970s and 1980s.

Kolesar is a little bit older than some of the prospects we are profiling here, but he has been a strong addition to the Vegas lineup as the club looks to go deep into the playoffs once again. 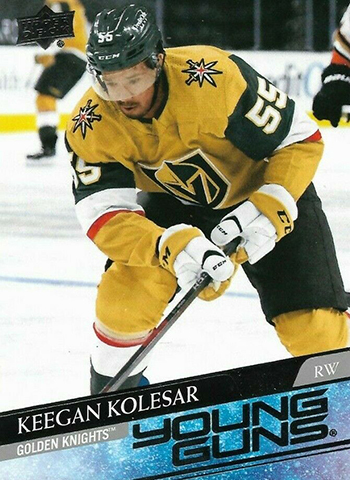 A strong physical presence up front, Kolesar was originally drafted 69th overall by Columbus back in 2015. After 37 appearances, he had been credited with 83 hits and recorded 10 points. The gritty fourth–liner’s cards are certain to be a hit with Golden Knights fans, and he may gain additional exposure once the playoffs are in full swing.

One thing that many fans will not realize though is he has some untapped offensive potential. During playoff action with the Seattle Thunderbirds in 2017, Kolesar paced all WHL players with 31 points on the way to a league championship.

Some may look at Foote’s offensive production during his rookie campaign with the Lightning and wonder why he makes this list. Well, for starters, he is a second-generation talent as his father, Adam, was a two-time Stanley Cup champion with Colorado. 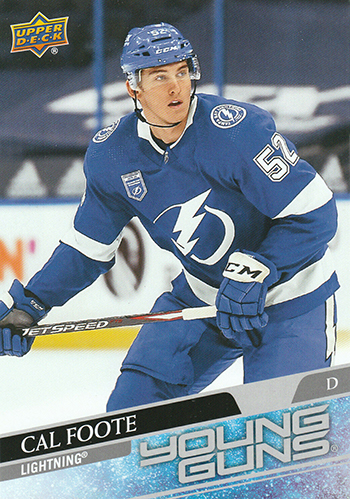 Foote’s lineage is far from the lone reason why his Young Guns card is a smart and potentially economical option. Looking back on his junior days with the WHL’s Kelowna Rockets, he demonstrated plenty of two-way potential and spent the 2017-18 season as the club’s captain. During that campaign, he was named to the WHL West First All-Star Team and helped Canada capture gold at the World Junior Championship. After graduating to the AHL level, he enjoyed two seasons where he scored in the 30-point range and kicked off 2020-21 in a Lightning uniform.

The former first-round pick (14th overall in 2017) recorded his first shot on goal against the Nashville Predators on January 30 and it went into the net. While he had only posted a pair of assists over the 30 games that followed, he earned a +9 rating while seeing time on the team’s third defensive pairing. In time, Foote should prove to be a solid NHL talent and benefit from having teammates like Victor Hedman, David Savard, and Ryan McDonagh to provide guidance.