Vs. System 2PCG: Into the Darkness Card Preview – A Foot in Two Worlds

Welcome back to the final preview for the Darkness and Light Arc for Vs. System 2PCG! This Arc features various forms of Darkness and Light throughout the Marvel Universe. The first 55-card Issue focused on one of the darkest teams in Marvel’s history: The Masters of Evil! The second 55-card Issue introduced Spells and highlighted the masters of the Mystic Arts! This final Issue, Into the Darkness, takes a dark turn into the world of the denizens of darkness!

We saw some horrific characters last time: but don’t give up hope! There are some who fight the monsters in the dark! You all know by now who I mean! 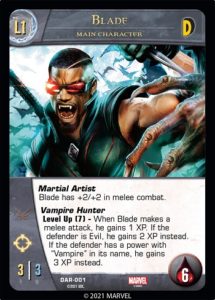 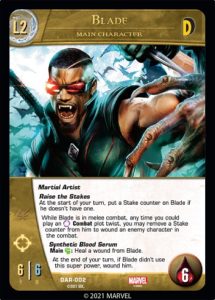 I love a good Stake.

Note: Stake counters, like all counters unless otherwise noted in their rules, fall off when Blade is turned face down.

And here is his supporting character: 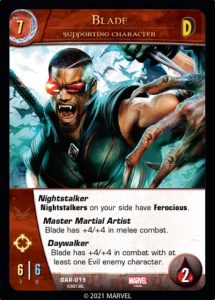 Remember that Ferocious means that he strikes in melee combat before other characters without Ferocious.

But the Daywalker is not the only guardian against the darkness in the Issue! 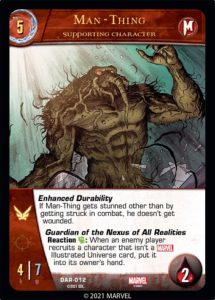 Remember that Reactions happen as a response to something else happening. So, in this case, Man-Thing can only use Guardian of the Nexus of All Realities when an enemy character is recruited.

Also keep in mind that the player whose character is sent back to its owner’s hand does use up the recruit points for that character. (Man-Thing does not give refunds.)

It’s a good thing we have powerful guardians like these, for the side of Evil has yet another weapon: 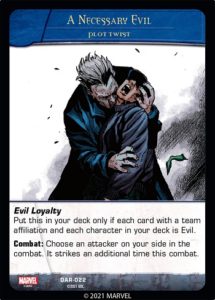 Note: Additional strikes happen at the same time as the normal strike, essentially doubling the ATK of the attacker.

Don’t despair however! Without Evil there can be no Good! 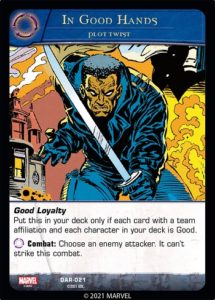 Thanks for being the light on our journey into the darkness of the Darkness and Light Vs. System 2PCG Arc. Please join us next time for a very civil conversation indeed!

Let the hunt begin when Vs. System 2PCG: Into the Darkness arrives on April 14th!

Does “A Evil Necessary” work with non-affiliation main character but the deck is evil loyalty?

No. Each character must be Evil in the Evil loyalty wording.