The Other 2020-21 NHL® Young Guns: There’s More to Hunt than Lafreniere

Collectors all over the world have gone wild for the recent release of 2020-21 NHL® Upper Deck Series One – especially since it features the hotly-anticipated Young Guns card of New York Rangers rookie Alexis Lafreniere, the first overall pick in the 2020 NHL Draft. 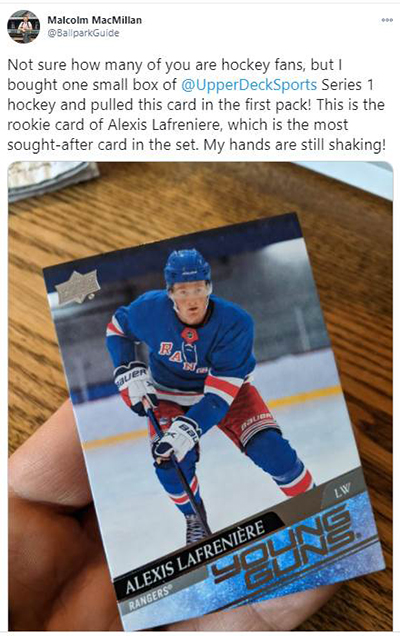 With sales of the card eclipsing prices seen in the recent past for top NHL rookies upon hitting the market, the hype among collectors both new and established is at a fevered pitch. There are many factors which have created this unprecedented excitement, but what about the other Young Guns cards that are popping out of packs?

With the rules on rookie card eligibility changing for 2020-21, there are some top talent that were able to appear in this set which were on the expanded rosters for the 2020 postseason. Even though some of them have yet to skate in an NHL contest, you will be able to get in on the ground floor for several big names that aim to make an impact on the ice in the coming season and beyond. 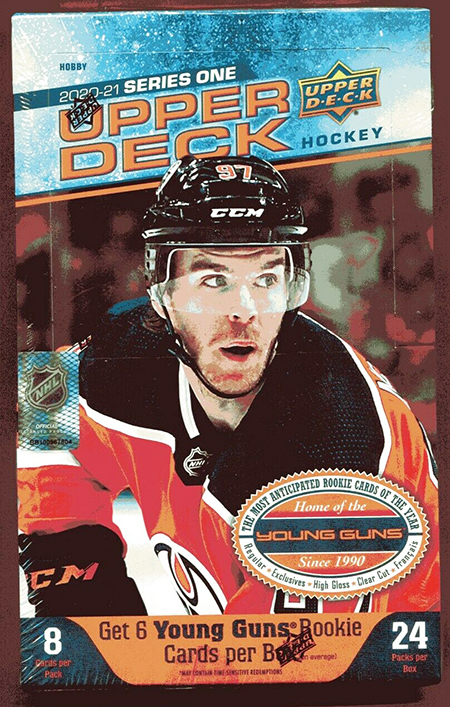 Collectors have been enjoying the box opening experience with 2020-21 NHL Upper Deck Series One.

After a quick examination of the checklist, here are some of the brightest prospects you want to consider adding to your collection: 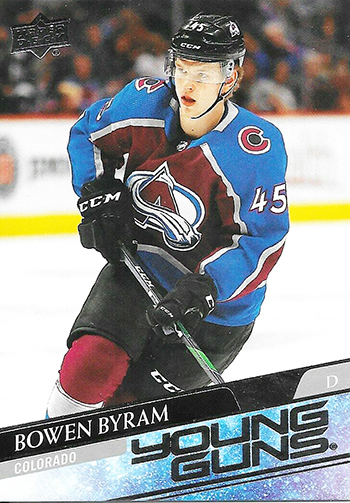 Named the top prospect in the game in the annual Future Watch issue of The Hockey News, Byram is going to be a big part of a scary blue line corps with the Avalanche for years to come. Like Cale Makar, Bowen Byram was a fourth overall pick (2019), and has also won a gold medal with Canada at the World Junior Championship. He’s been red hot for this year’s World Junior Championships as well.

In 2019-20, Byram was an assistant captain with the WHL’s Vancouver Giants and the slick passer’s 52-point performance earned a spot on the league’s West Second All-Star Team. When play starts up, expect him to seriously challenge for a spot on the Avalanche roster and for the Calder Trophy.

Another great Young Guns card featuring an Avalanche player comes in the form of goaltender Pavel Francouz. Even though he has some NHL experience under his belt already, he had not had a pack-issued rookie card until this season (the first being in 2020-21 O-Pee-Chee). At the age of 30, he is no longer considered a rookie, but it was important that the 21-game winner finally get his due recognition. 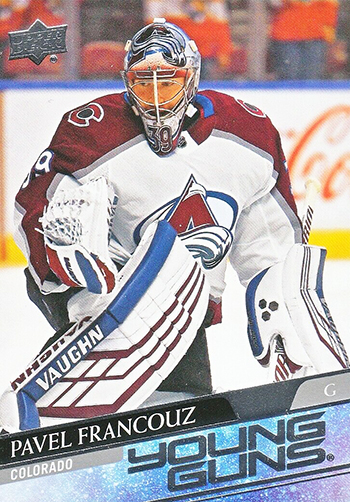 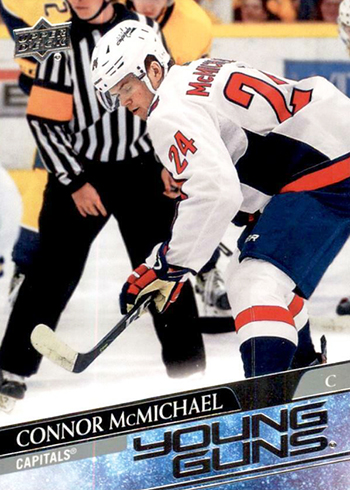 Before being taken 25th overall by the Capitals in the 2019 NHL Draft, Connor McMichael broke out as a prime offensive performer with the OHL’s London Knights. Carrying that momentum forward into last season, he finished third in goals (45) and points (102) in addition to skating for Canada’s gold medal squad at the 2020 World Junior Championship. In addition to his offensive talents, he is also viewed as a puck handler that is blessed with great speed. 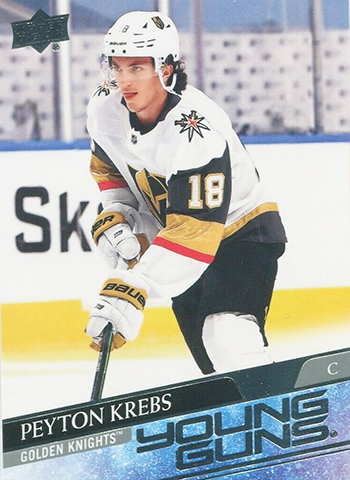 One of the top prospects for the Golden Knights, 2019 first round pick Peyton Krebs was an offensive force for the WHL’s Winnipeg ICE last year and held the club’s captaincy during its first season in Manitoba’s capital. In addition to his strong scoring abilities, he is also a smooth skater that plays a smart game at both ends of the rink. Despite not making it into playoff action with Vegas, he was able to take in the pro experience while watching their trip to the Western Conference Final alongside his teammates. 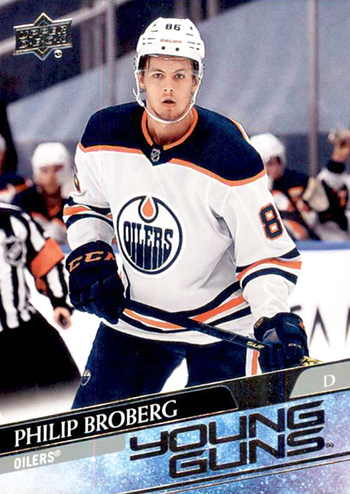 Speedy and able to take command on the ice, Philip Broberg is highly rated defender who could have an excellent future with the Oilers. After winning a gold medal with Sweden at the 2019 U-18 World Junior Championship, Edmonton made him the eighth overall pick and he transitioned well into the SHL. Over 45 games, the teen sensation put up a respectable eight points before getting the chance to be on the postseason for the Oilers. 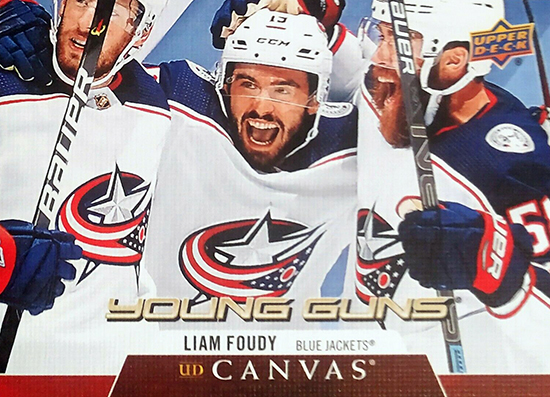 Foudy enjoyed a memorable 2019-20 season as he not only served as captain of the OHL’s London Knights and won World Junior gold with Canada, but also made his NHL debut when the Blue Jackets when injuries necessitated a call-up. Brought aboard for the postseason, he scored a crucial insurance goal to seal a round-robin victory over the Toronto Maple Leafs. Collectors will be pleased to see that moment has been forever immortalized on cardboard as the post-goal celebration appears on his UD Canvas Young Guns card.

Even before making it all the way to the Stanley Cup Final, the Dallas Stars had a fine assortment of prospects that were ranked highly in the 2020 Future Watch issue by The Hockey News developing in the organization.

The excitement starts with Thomas Harley, a strong young offensive blueliner that was coming off another strong year with the OHL’s Mississauga Steelheads where he earned a spot on the Second All-Star Team. During the postseason, he was on the ice as Dallas faced the Colorado Avalanche on August 5, 2020. Seeing 10:58 of ice time, he was able to deliver a hit and blocked a shot from the opposition. 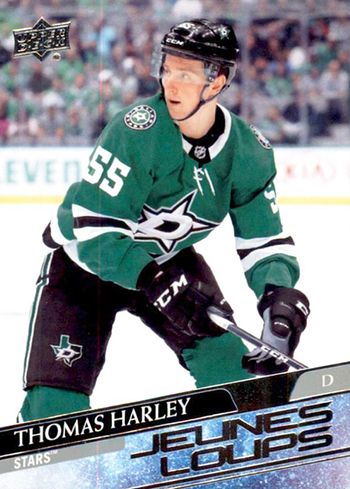 Another OHL product, Ty Dellandrea, was on the Stars roster, but did not make an appearance in the postseason. Coming off a term wearing the “C” for the Flint Firebirds, the 2018 first rounder was the proud recipient of the Mickey Renaud Captains Trophy in 2019-20 along with winning a gold medal for Canada at the 2020 World Junior Championship. 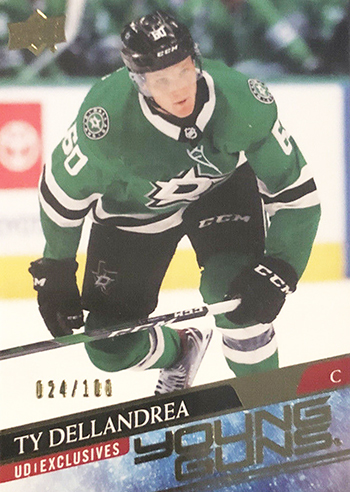 The Stars have their potential goalie of the future in Boston University product Jake Oettinger, who made two relief appearances during the playoffs following his first pro season with the AHL’s Texas Stars. The only goalie of the post-expansion era to make their debut in the round leading up to the Stanley Cup Final, he relieved Anton Khudobin during Game 2 of the Western Conference Final against the Vegas Golden Knights. During the Final against Tampa Bay, he saw ice time during Game 3. All told, he was perfect over 37 minutes, turning away eight shots. 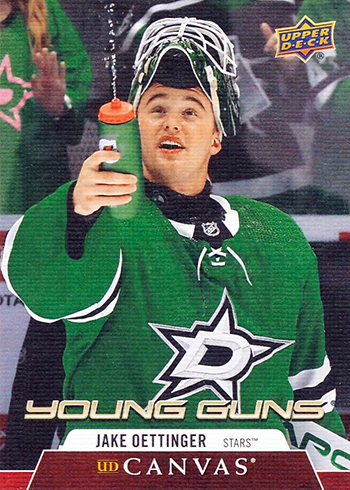 One of the feel-good stories of the playoffs, Nick Robertson terrorized OHL goalies last year as he sent 55 pucks into the net for the Peterborough Petes. A second round choice by Toronto in 2019, his performance put him under consideration for a roster spot in the playoff bubble and he did not disappoint. 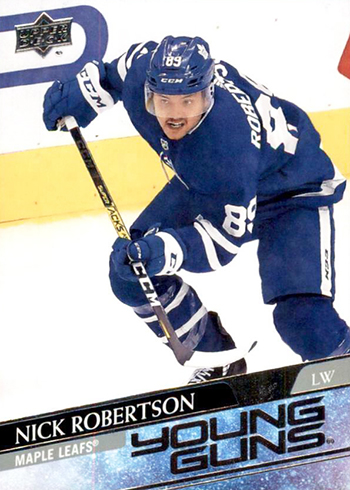 Scoring for the first time in a tough loss to Columbus, he was the youngest player to make their debut in the postseason since Jarome Iginla back in 1996. Thanks to his strong showing, he should be a welcome addition to the Maple Leafs roster going forward.

Robertson’s older brother, Jason, also has a Young Guns card in 2020-21 and he is another top prospect in the Dallas Stars system. Maple Leafs fans will also find Young Guns card of highly-touted 2017 first rounder Timothy Liljegren this season. The club took its time in developing his talent and he may get a long-term look. 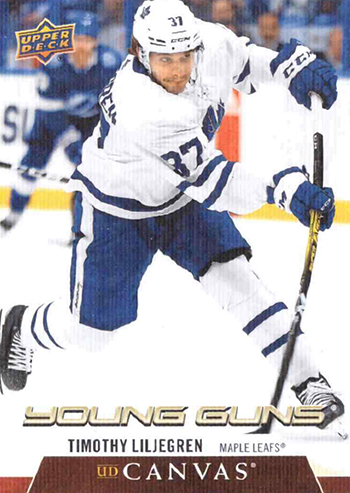 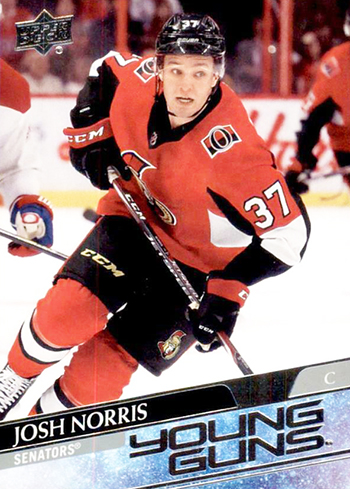 A second-generation talent whose father, Dwayne, played for the Quebec Nordiques and Mighty Ducks of Anaheim between 1993-94 and 1995-96, Josh Norris broke out as the AHL’s top rookie performer last season.

Originally drafted 19th overall by San Jose in 2017, Norris came to the Ottawa organization as part of the Erik Karlsson trade. A two-time medallist for the United States at the World Junior Championship, he finished up with the University of Michigan before joining the Belleville Senators. He paced all freshmen with 61 points as the farm team attempted to make the playoffs for the first time. In late February, he was brought up for games against Montreal, Vancouver, and Detroit. Expected to challenge for a roster spot once the 2020-21 campaign begins, he is a key part of a youth movement which could send Ottawa back into contention. 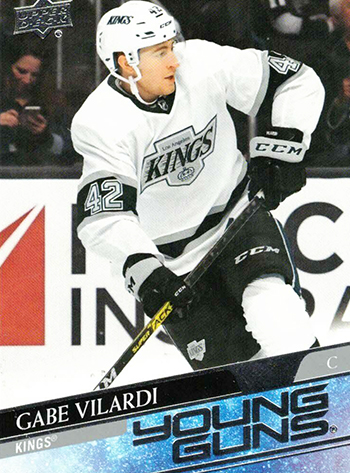 Gabe Vilardi was a standout at the junior level, but serious injuries limited his on-ice appearances after the Kings took him 11th overall in the 2017 NHL Draft. Returning to action last season with the AHL’s Ontario Reign, he gave a strong effort which was rewarded with a call-up to Los Angeles late in the regular schedule. In his debut against Florida on February 20, 2020, he scored once and added an assist to help his team to victory. Over 10 appearances, he notched three goals and four assists as the Kings went on an 8-1-1 run before play came to a halt. 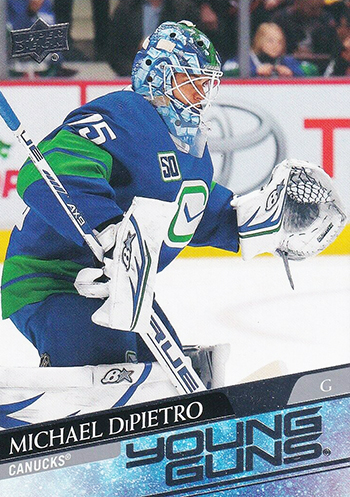 A true star at the OHL level for the Windsor Spitfires and Ottawa 67’s, Michael DiPietro racked up plenty of accolades like a Memorial Cup championship and CHL Goaltender of the Year honors in addition to guarding the crease for Canada at the 2019 World Junior Championship.

While he made his NHL debut on an emergency basis in 2018-19, he graduated to the pro ranks last season with the AHL’s Utica Comets and paced all freshman netminders with 21 victories. It may take a bit of time for him to earn starting duties on Vancouver’s depth chart, but he shows a great deal of promise that may reward those picking up his first cards over time.

Another Canucks prospect appearing in the set is Olli Juolevi, who was the fifth overall pick back in 2016. Scouts view him as a well-rounded player and ranked second among Comets defenders with 25 points last year. On August 7, he made his playoff debut as Vancouver defeated the Minnesota Wild. 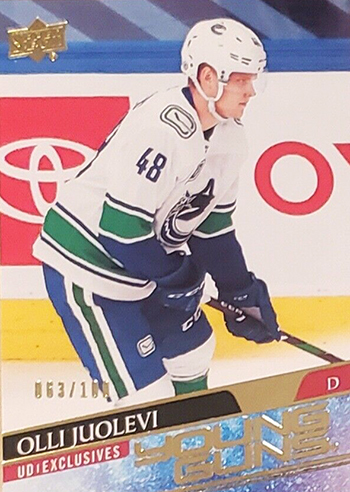 
I Opened 3 boxes of series 1 hobby and never pulled a Alexis Lafreniere yet.