Welcome to the second of four previews for Crossover Volume 3, the final Issue of the year for Vs. System 2PCG. This Issue has it all: main and supporting characters of course, but also four new game modes (new ways to play Vs. System 2PCG)! Last time we told you about the Collector’s Red Team, and today we’re going to start with the Yellow Team! 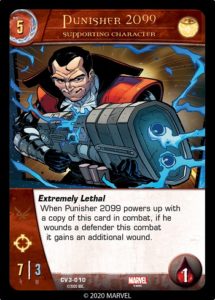 Yes, he can wound main characters an additional time with Extremely Lethal. It’s not called Barely Lethal! But he’s just the Yellow Team’s summoner, not the team leader… 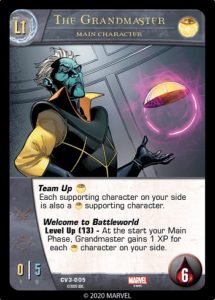 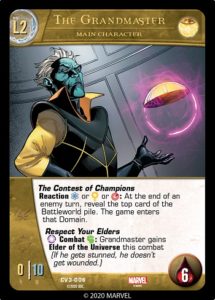 That’s more like it! Wait, what does that do?! What is happening?!

Battleworld is a patchwork planet created by various cosmic entities over the years with various lands, or Domains, on it. There are 12 Battleworld Domains in this Issue.

Setup: Shuffle 12 different random Battleworld Domains and place them face down in a pile between the players.

Rules: When a defending Main Character gets wounded, reveal the top Battleworld Domain. The game “enters” this Domain, meaning its effects are now applicable. The game will stay in that Domain until the next time a defending Main Character gets wounded, then the game will “leave” the current Battleworld Domain and enter the next one. (Put the older Domain into a discard pile next to the pile, and reveal the top card of the pile to be the new Domain.) The game can only be in one Domain at a time. If the Domain pile ever runs out, shuffle the discard pile, and make a new pile. Domains aren’t “in play” and can’t be affected by cards or effects.

But enough rules, let’s see some of these Domains! 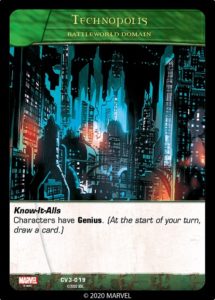 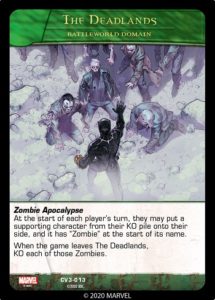 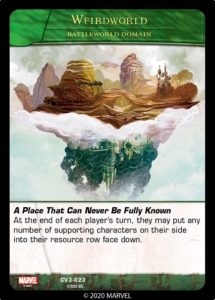 So how does the Grandmaster work? It’s pretty simple. If you are playing the Grandmaster, you’ll need to bring (and shuffle) your own Battleworld pile to the game. This pile is private and consists of your choice of 12 Battleworld Domains. When he uses Contest of Champions, the game enters the top Domain of your pile as if you had been playing the Battleworld game mode all along. The main difference is that if another defending main character is wounded, the game will leave the current Domain but won’t enter a new one. The Grandmaster will need to use Contest of Champions again for that to happen.

There are some further rules if you’re playing the Battleworld game mode and one player is the Grandmaster, or if both players are the Grandmaster, but we don’t need to worry about those right now.

We hope you enjoyed this glimpse into a broader Vs. System 2PCG world. We’ll leave you now with an image of one more Domain, instead of our usual bad pun about what to look for next week. 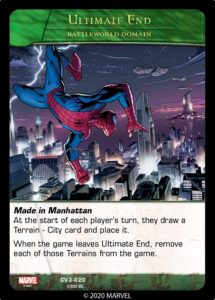