Vs. System 2PCG: Crossover Vol 3 Card Preview – I Have Many Things

Welcome to the first preview for Crossover Volume 3, the final Issue of the year for Vs. System 2PCG. This Issue has it all: main and supporting characters of course, but also four new game modes (new ways to play Vs. System 2PCG)! We’re excited to show you, so let’s get started!

Crossover Volume 3 is centered around the most recent Contest of Champion storyline, wherein the Grandmaster, the Collector, and the Maestro all battle over the remnants of Battleworld (also known as the Battlerealm). Today we are going to look at the characters in the Issue, and each of the next three previews will focus on the new game modes in the Issue.

In the story, there are two teams: the Evil Yellow Team

, created by the Grandmaster, whose team we’ll leave for a later preview. The other team is the Good Red Team

, headed by the Collector. 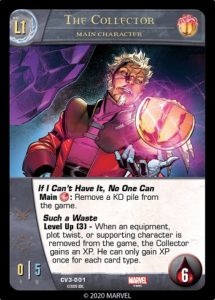 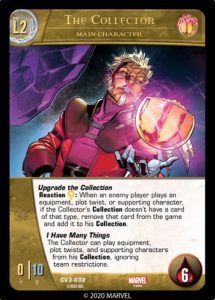 Note: When he plays a card from his Collection, it can’t be played as a resource.

What a guy! Now, let’s see who he’s picked as his summoner! 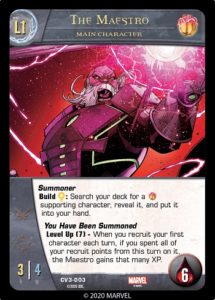 Seems like a wise choice…unless it’s the worst choice? 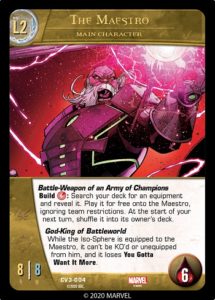 Note he is no longer on the Red Team, so it looks like maybe he wasn’t the best choice after all. The Maestro overpowers both the Collector and the Grandmaster to take possession of the mighty Iso-Sphere! 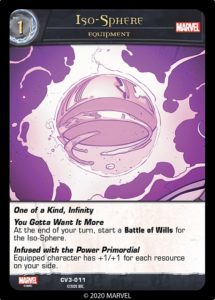 The Iso-Sphere has Infinity, like the Infinity Gems. This means that when it gets put into a KO pile from anywhere, you may shuffle it into its owner’s deck. And it also has Battle of Wills, which represents that the character with the strongest willpower can gain control of it. From the rules:

A Battle of Wills requires characters to bid how many power symbols they’ll pay to take (or keep) control of the Iso-Sphere. It works like this: The equipped character starts the bidding. (They can bid 0.) Then the next player either chooses a face-up character on their side to bid a higher number or passes. If they pass, they’re out of the Battle of Wills. Then the next player goes, and so on until all but one player passes. Then that player’s character pays the winning number of power symbols from their resource row (no discarding from hand) and the Iso-Sphere is moved to that character (if it’s not already there). Note: A character can’t bid a number they can’t pay. Once you choose a character as a bidder, you can’t choose a different character to be your bidder in the same Battle of Wills. 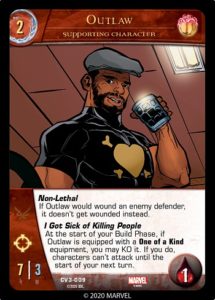 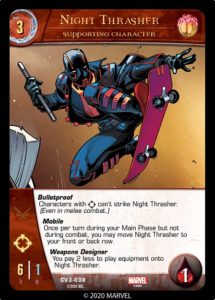 Note that even if Outlaw is in a team attack, his Non-Lethal still happens.

And now, maybe the best known character from Contest of Champions! 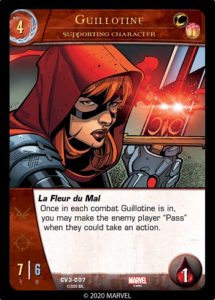 La Fleur du Mal lets you force your opponent to “pass” while in combat instead of playing a plot twist, using a super power, or powering up. For example, if Guillotine attacks a character, you could pass and then force your opponent to pass, which will cause the combat to resolve. Or you could take an action, cause them to pass, then pass yourself, which will also cause the combat to resolve.

Note: We highly suggest you make a “guillotine” motion when causing your opponent to “pass”.

We hope you liked our first look at Crossover Volume 3. Come back next time to see why life on Battlerealm is so Grand!