Vs. System 2PCG: The Omegas Card Preview – Don’t Drink That!

Welcome to the third preview for The Omegas, the third and final Issue in the Omega Level Arc for Vs. System 2PCG. This Issue includes only Omega Level Mutants (

), of which there are fourteen official members. One, Franklin Richards, arrived in The Fantastic Battles (in the last Arc), and this Issue has each of the other thirteen! Vs. System 2PCG now has each Omega Level Mutant!

), but it is neither Good nor Evil. Here we go! 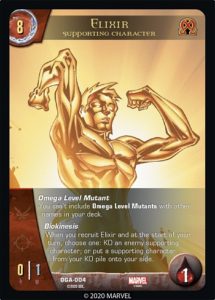 I’m no scientist, but with such low stats, he’s probably no good.

This next guy has a few more stats, but is it enough? 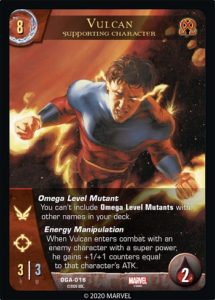 That’s hot! Keep in mind that “enters combat” works when he attacks and is attacked. And if he is team attacked by more than one enemy character with a super power, he will get counters from each character with at least one super power.

So far these two are pretty straightforward. How about more of a curveball? 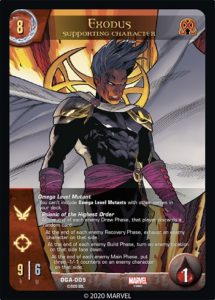 Wow, he really studied the rulebook, then broke all the rules! But not as much as our next guest… 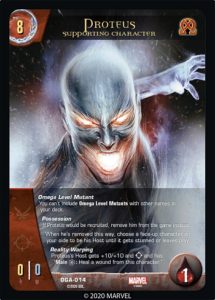 He doesn’t even make his way into the game!

Note that his Possession works very similarly to Shadow King’s Anchor Host, but is slightly different. 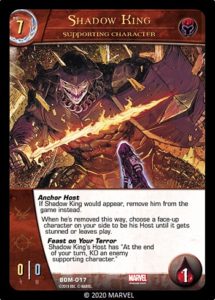 Shadow King Supporting Character from the 2018 Brotherhood of Mutants expansion.

Because Possession says “would be recruited”, Proteus is harder to sneak into play without paying for him. But we think he’s worth it!

We hope you liked this third, yet not final look at the Omegas! Join us next time as we look at only one more character (or is it eighteen)?