The H.A.M.M.E.R. team member Mimic has disappointed us. We’ve given him enough time to prove he is rehabilitated, but he has been unable to do so. We now have no choice: we must limit his power once again.

Hi everyone! Today we will be updating how Mimic’s Absorption History works. 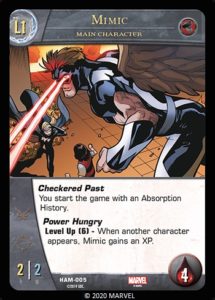 Previously the Absorption History pile included any three main characters with different names. Going forward, his Absorption History pile may only include the original five X-Men plus Professor X. This change reduces the number of main characters Mimic can copy, which avoids overpowered interactions. It also brings Mimic more in line with his classic flavor. This change is effective October 1st, 2020.

Below are the updated rules. (This replaces the rules entry in the H.A.M.M.E.R. Issue rules insert.) The changes are underlined.

Mimic’s Absorption History, from his Checkered Past Keyword, represents three characters that he’s copied powers from. In game terms it’s a pile that includes exactly three Main Character cards, one Level 1, one Level 2, and one Level 3. They can only be from the Illustrated Universe, they must be Marvel and they must have three different card titles from the following list:

Note: There is no main character with the card title Beast. Yet.

“Card title” refers to the name at the top of the card. It does not include additional names granted via AKA.

At the time of this writing (September 2020), your choices at each level are:

During setup when you reveal Mimic as your Main Character, you’ll also reveal the Level 1 character in your Absorption History. Mimic gains its Keyword and Super Powers only when the game begins.

When Mimic becomes Level 2, you’ll reveal the Level 2 character in your Absorption History. Mimic now gains its Keyword and Super Power and loses the powers of the Level 1 character he was previously copying.

When Mimic becomes Level 3, you’ll reveal the Level 3 character in your Absorption History. Mimic now gains its Keyword and Super Powers and loses the powers of the Level 2 character he was previously copying.

Note: While Checkered Past is a Keyword and can technically be turned off by certain effects, turning it off doesn’t affect Mimic’s ability to use the pile (it’s locked in from the beginning of the game).

We regret having to resort to this, but Mimic has simply shown us he cannot be trusted.