Legendary: Realm of Kings – This new expansion truly gets the royal treatment.

The Inhumans are a mysterious, powerful race living in the hidden city of Attilan, on Earth’s moon. Strongest of all the Inhumans are the Royal Family led by King Blackagar Boltagon.

Long misunderstood the Inhumans have been treated like a failed experiment and rejected as dangerous monsters.  For them, the danger lies everywhere! Not only on the cosmic battlefields of space but it also lurks within the very palace walls. While space fleets battle for the destiny of empires, Black Bolt’s brother Maximus schemes a betrayal to seize the throne. Heavy is the head that wears the crown. Are you up for the challenge?

What better way to begin our preview for this thrilling new expansion, Legendary®: Realm of Kings than a royal audience with the King and Queen. So without further ado, it is my great pleasure to introduce to you the mighty King Black Bolt. 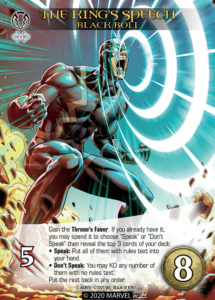 As you can see Black Bolt has our first new keyword, Throne’s Favor.

The power of the Inhuman Kingdom and the Kree and Shi’ar interstellar empires are truly vast. Influence over these empires shifts frequently in a battle for supremacy. This is represented by a new game concept called the “Throne’s Favor.”

And now the magnificent Queen, Medusa! Not only does Medusa have Throne’s Favor but she is also armed with our next new keyword, When Recruited. 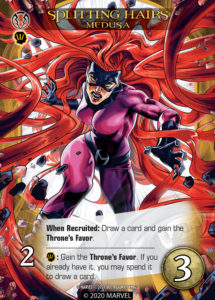 The Inhumans’ powerful decision to go to war is shown with new special abilities they use “When Recruited.”

Another trusted member of the royal family is the wise and mysterious Karnak, master of martial arts, and able to detect the slightest weakness in his opponent. 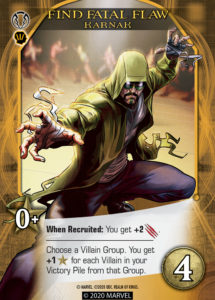 Some Karnak cards say things like “Choose a Villain Group. You get +1

for each Villain in your Victory Pile from that Group.” For example, you can choose the Villain Group “Inhuman Rebellion.”

How about the powerful Gorgon and every Inhuman’s best friend, the ever faithful Lockjaw! 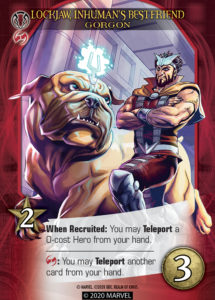 Lockjaw helps Gorgon with the “Teleport” keyword that originally appeared in Legendary®: Dark City in 2013.

Where would we be without some worthy adversaries? How about Black Bolt’s very own brother, Maximus the Mad? Leading the Inhuman Rebellion loyal only to him, he seeks the crown for himself. It is said that power corrupts. This is certainly true for Maximus. His lust for power consumes him and leads to the betrayal of his own family! 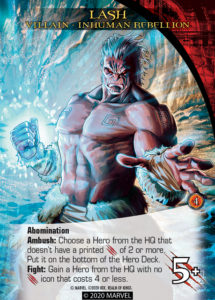 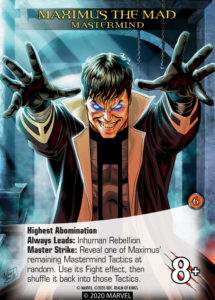 Some Inhuman Villains have become horrific, unpredictable, and even monstrous. Accordingly, they use the “Abomination” keyword that debuted in Legendary®: Captain America 75th Anniversary in 2016.

Finally, let’s take a look at a couple of challenging new schemes. 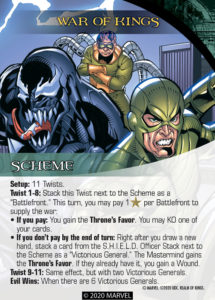 In the epic Marvel comics storyline “War of Kings,” the Inhumans emerge from their self-imposed exile to go to war. To win you must dominate the battlefront. In order to win it will require a great strategy and careful planning. Will you be able to supply your generals with what they need to emerge victoriously? After all, war is not for the faint of heart! 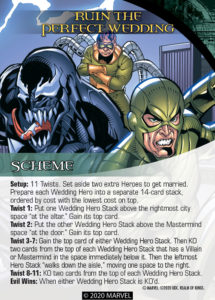 There is to be a royal wedding! A union that will bring peace to the galaxy, but I guess not everyone loves weddings. There are sinister forces at work to ruin this joining of two strong houses. Will you be able to foil this dark plot? Will there be chaos and bloodshed or a happy ever after? Their fate lies in your hands!

We hope you have enjoyed this quick look at Legendary®: Realm of Kings and that you are excited as we are about the long-overdue arrival of the Inhumans as they take their place alongside the ever expanding list of fantastic Legendary heroes!