Welcome to the fourth and final preview for The Omegas, the third and final Issue in the Omega Level Arc for Vs. System 2PCG. This Issue includes only Omega Level Mutants (

), of which there are fourteen official members. One, Franklin Richards, arrived in the Fantastic Battles (in the last Arc), and this Issue has each of the other thirteen! Vs. System 2PCG now has each Omega Level Mutant!

), but it is neither Good nor Evil. Today we look at the last Omega, or should we say, the last eighteen? 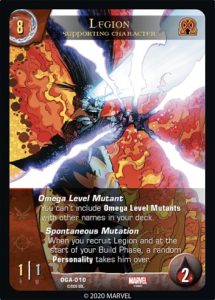 We hope you liked this final look at the Om – what’s that? You don’t know what Personality is? You must be boring at parties! Just a little joke. Oh, you mean in the context of the game? Well, it’s pretty cool. It’s neat-o. Rad.

When a Personality takes over Legion, the following occurs:

When you recruit Legion and at the start of each of your Build Phases, randomly choose an option from a list of twenty options (you can choose the same Personality on consecutive turns).

There, happy? What, now you want to know about these Personalities? Pretty demanding. Well, although there are hundreds of personalities in David Haller’s mind, Upper Deck told us we couldn’t use that much paper. So we picked eighteen of our favorite. Here’s a sample:

We hope you liked this final look at the Omegas! Legion has many more surprises for you to discover! We can’t wait to see what you’ll cook up with all these characters! Join us next time for more Vs. System 2PCG previews!