The NHL DraftTM is finally here, and we’re beyond excited as we anticipate Upper Deck’s exclusive spokesman Alexis Lafrenière being selected the No. 1 overall pick! This year’s event will be unlike any before as the entire draft will be virtual. To help bring the excitement of the draft to hockey fans across the globe, we have been running various contests, promotions, and much more!

Whether you’re planning on having a Draft Day party at home or a virtual one, Upper Deck has you covered!

NHL Draft Board – We’ve created a Draft poster that can be printed out at home. Follow along as each prospect gets called to the “stage”. 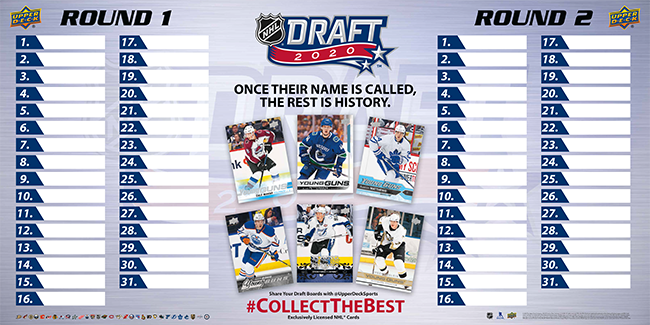 Zoom Background – If you plan on video chatting with your family and friends during the Draft, then make sure to use our Zoom backgrounds! This will certainly get you in the cheering spirit. 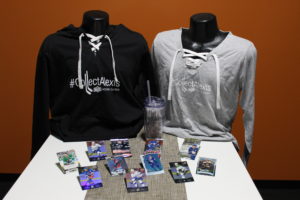 Since the NHL Draft will be a virtual event, it’s only fitting that we’re offering FREE 2020 Top Prospects packs on our digital platform, e-Pack, featuring Alexis Lafrenière, Quinton Byfield and other top prospects. Grab your free pack today before it ends on Saturday, October 17, 2020 at www.UpperDeckEpack.com/redemption/Top2020. 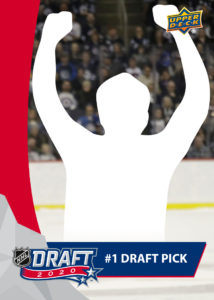 Have you ever wanted to be on your own trading card but never got the chance? Now you have two ways to put yourself on your own card.

Alexis Lafrenière is a rising superstar and is destined to make a significant impact on the game. As an exclusive Upper Deck spokesman, check out his collection that features signed and inscribed pucks, Océanic Rimouski jerseys, and Team Canada jerseys. The collection also features several never-before-seen images, including a framed acrylic stick blade hand-signed by Lafrenière. His first official NHL® autographed items are expected to release later this year and will be available at UpperDeckStore.com.

Over the last three weeks, we have been running a caption contest on Instagram @UpperDeckSports with images of Alexis Lafrenière. There were nine winners who received a $100 prize pack that included exclusive #CollectAlexis swag! Not only that, but the winner with the best overall caption will be declared the grand prize winner and earn an Upper Deck Authenticated autographed Lafrenière memorabilia piece.

With our friends at Beckett Media, we had a special live streaming event on the eve of the 2020 NHL Draft that discussed a large range of topics from what to expect during the Draft, the excitement around Alexis Lafrenière being the projected #1 Draft pick, the hobby, current Upper Deck products on the market, and what’s to come in the future!

During these unusual times, Upper Deck is looking to make this a memorable night for hockey fans across the globe.

Thanks for the NHL Draft Board!
Printed one yesterday