Vs. System 2PCG: The Omegas Card Preview – King of the Castle

Welcome to the second preview for The Omegas, the third and final Issue in the Omega Level Arc for Vs. System 2PCG. This Issue includes only Omega Level Mutants (

), of which there are fourteen official members. One, Franklin Richards, arrived in the Fantastic Battles (in the last Arc), and this Issue has each of the other thirteen! Vs. System 2PCG now has each Omega Level Mutant!

), but it is neither Good nor Evil. Onward! 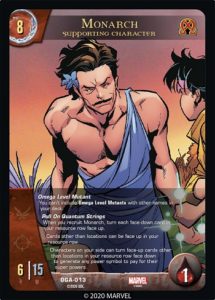 Pull on Quantum Strings is a bit of a weird power. You didn’t think they were all going to be straightforward, did you?

Here’s how it works, from the rules: You can have equipment, characters, and plot twists (non-locations) face up in your resource row and during your Resource Step you can play a non-location face up as a resource. Characters on your side can use these non-locations to pay for their super powers, regardless of their required power symbols.

Example: You have Monarch and the Cyclops supporting character on your side. Cyclops can use any of the non-locations face up in your resource row to pay for his Battle Tactics super power. He can still use School for Gifted Youngsters and Training Grounds to pay for Battle Tactics normally.

These non-locations can’t be used for any other purpose. When Monarch leaves your side, or if Quantum Strings gets turned off, turn each face-up non-location card in your resource row face down.

Let’s stick with the Ms, shall we? 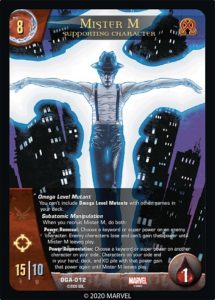 The Power Removal part of his Subatomic Manipulation is pretty standard. It’s the Power Augmentation you’re going to want to pay attention to! And note that if he is face down somehow but still in play, his power will still affect the game.

But there is one more Omega starting with ‘M’! You know him, you love him (or fear him)! Hide your silverware and cars! It’s… 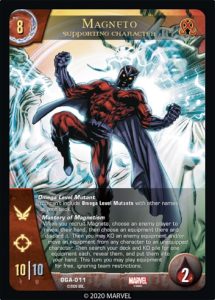 We considered just writing “Hey, all enemy equipment is messed up and do whatever you want with yours.” But Chad didn’t like that idea.

This next Omega doesn’t start with ‘M’, but he’s just a kid, so give him a break. 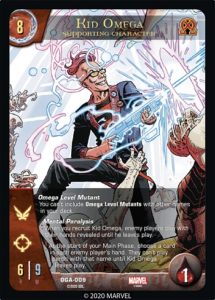 Note that if Kid Omega is face-up on your side for multiple starts of your Main Phases, he can continue choosing cards.

We hope you liked this second look at the Omegas! Join us next time for more of these exclusive characters!