Welcome to the first preview for Vs. System® 2PCG®: The Omegas, the third and final Issue in the Omega Level Arc. This Issue includes only Omega Level Mutants (

), of which there are fourteen official members. One, Franklin Richards, arrived in The Fantastic Battles (in the last Arc), and this Issue has each of the other thirteen! Vs. System 2PCG now has each Omega Level Mutant!

First, a little bookkeeping. As you may remember from Franklin, once you include one Omega Level Mutant in your deck, you can’t include Omega Level Mutants with other names in that deck. Now let’s discuss briefly about this team (

). It is a new team, with all the rights and privileges therein, but it is neither Good nor Evil (you can’t paint all of mutantkind with a broad brush like that). Now to some cards! 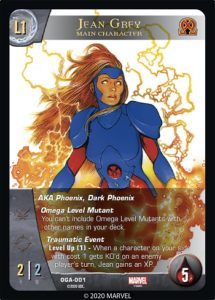 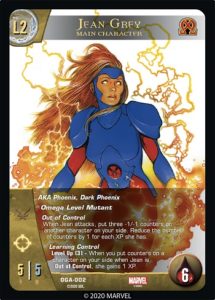 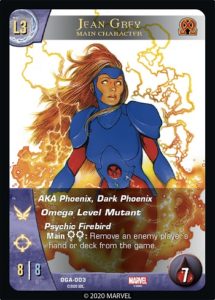 Oh, did we not mention that the art box would look a little different on these Omegas? But with so many incarnations over the years, surely she has a supporting character as well? 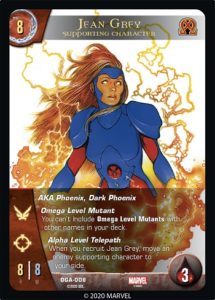 Hope you like what you’ve seen so far! Wanna see more? How about some more X-Men? 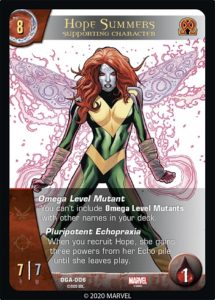 Hope starts the game with a private out-of-the-game Echo pile. It must consist of exactly 1

supporting character (Echoes) who don’t share any names. They can be copies of cards that are in your deck. When you recruit Hope, you must reveal your Echo pile, and choose a different power from each Echo for her to gain. You don’t have to choose the same three powers each time she is recruited.

Note: Since this is a “when you recruit” power, she will benefit from “appears” powers, like Iceman’s Freeze. 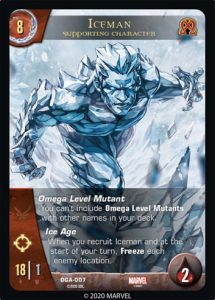 Note: Freezing locations means they become exhausted and they can’t ready on their turn (even if they’re face down). Why does this matter? Exhausted resources don’t produce recruit points!

Did you hear that? It sounded like thunder to me! 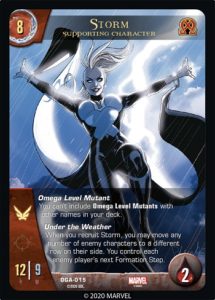 Under the Weather indeed. Storm will make your opponent sick to their stomach! Note that you will control each enemy player’s next Formation Step even if Storm is turned face down or leaves play before those Formation Steps.

We hope you liked this first look at the Omegas! Join us next time for more of these exclusive characters!


So, Jean Grey’s power says, “When you put counters on a character on your side when Jean is Out of Control she gains 1XP.”

Is that ANY type of counter? So if you put a +1 counter, you get an XP?


Learning Control is a triggered power, so it is only “active” at the moment it triggered, and only counters added during Out of Control count.