Vs. System 2PCG: Freedom Force Card Preview – Whose Fault Is It?

Welcome back to our second round of previews for the Omega Arc. Last Issue focused on the alternate timeline of the Future Past storyline. This Issue focuses on the Brotherhood of Mutants including three prominent members of the Freedom Force.

Let’s start off with a character who likes to shake things up. 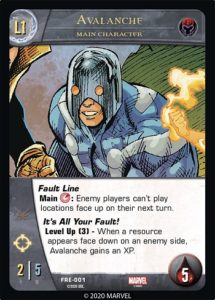 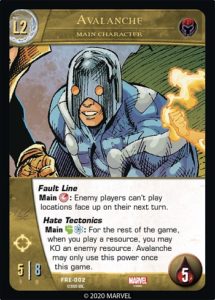 Fault Line prevents an opponent from playing a location face up. They can still choose to place it face down though (like any other card type). But in that case It’s All Your Fault! Will give Avalanche an XP.

Hate Tectonics is a once per game power, but its effect is so powerful your opponent will hate it.

Note: It can KO any enemy resource including their locations.

Speaking of placing resources, our next character, um, likes to do that. 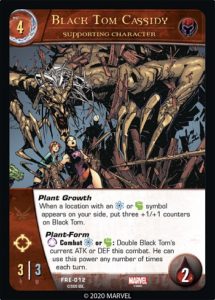 Now let’s say your opponent plays a resource face down and you’re wondering whether it’s because you used Avalanche’s Fault Line or because they simply didn’t have any locations. Our next preview can help you out. 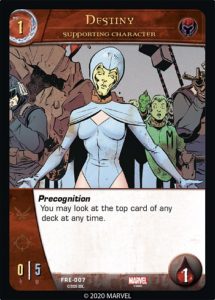 Destiny gives you a preview of what cards each player will soon have. And if a player would draw two or more at a time (including during their Draw Phase), Precognition will let you look at the top card of their deck before and after each individual draw. In other words, you’ll get to see each card they draw.

Next, let’s check out an iconic piece of headgear. 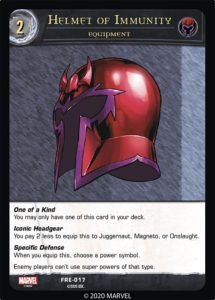 Specific Defense lets you turn off all enemy super powers of the chosen type. Keep in mind, if a super power has multiple power symbols — such as Avalanche’s Hate Tectonics or Black Tom’s Plant-Form — it counts as both types. So for example, you could make both of the above powers unusable by choosing

Finally, let’s take a look at the ultimate mutant. 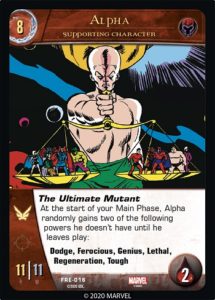 We hope you enjoyed today’s preview of Alpha. Come back next time when we start looking at some Omegas.