Welcome back to our second round of previews for the Omega Arc. Last Issue focused on the alternate timeline of the Future Past story line. This Issue focuses on the Brotherhood of Mutants including three prominent members of the Freedom Force.

Let’s start things off with a pretty hot card. 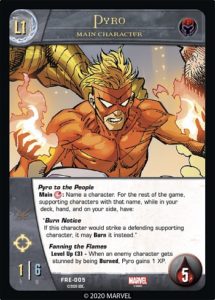 Pyro to the People grants Burn Notice to all copies of a supporting character with the chosen name.

Quick refresher on what the Burn effect means: 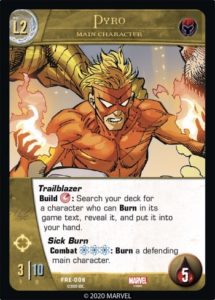 Trailblazer lets you search for any character in your deck that can Burn, including characters Pyro gave Burn Notice to.

Sick Burn is the first effect in the game that lets you Burn a defending main character. (When this happens, we encourage your opponent to say, “That really burns me up!”)

Now I know what you’re all thinking. Burn effects are great, but what if you need to get a 3+ health supporting character off the board this turn? Maybe you can make it “forget” it has more than 1 health… 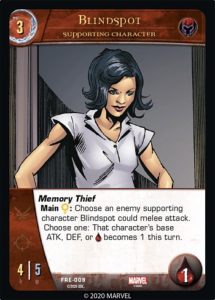 Note: If you set a characters health to 1 and it already has a wound, it will immediately get KO’d.

For our final preview, check out a plot twist sure to make your opponent steam. 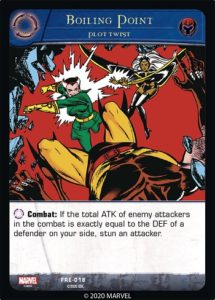 This plot twist is already great if your opponent goes for a “perfect” attack, but it can lead to some insane swings against a team attack (since you’ll often get to stun multiple attackers).

And you don’t have to rely on your opponent to go for a perfect attack. You can always play your own effect to set things up, and then use Boiling Point to wreck them. You big meany!

We hope you enjoyed today’s preview. Come back next time where we play “Whose Fault Is It Anyway?”