To unlock and purchase these packs, simply add any available hockey trading card product on e-Pack to your cart.* This week’s packs of 2019-20 Game Dated Moments cards highlight top moments from around the NHL® and will be available for purchase** in the Upper Deck e-Pack® Store until 9/18/2020 at 8:59 am (PST).

In Game 7 of Dallas’ second round series against the Colorado Avalanche, Joel Kiviranta recorded a hat trick, which included the game winning goal 7:24 into OT, sending the Stars to the Western Conference Final with a dramatic 5-4 win. Prior to the game, Kiviranta had only three NHL® postseason appearances and no playoff goals under his belt. 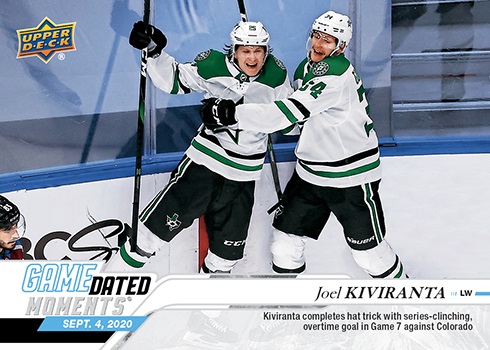 Card #105 (September 4, 2020) – Demko Sets Rookie Record for Most Saves in a Shutout During Postseason Play

Rookie goaltender Thatcher Demko put on an impressive performance for the Vancouver Canucks, stopping 48 shots on goal to lead the Canucks to a 4-0 victory in a second round elimination game against the Vegas Golden Knights. His 48 saves set a record for the most saves made by a rookie goaltender during a postseason shutout. 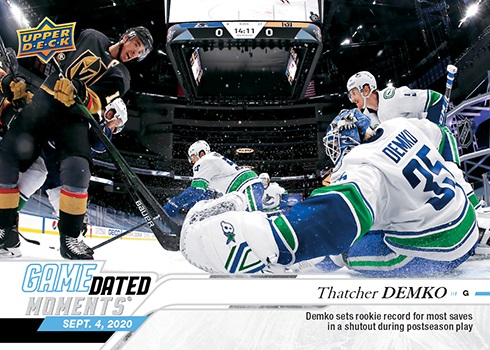 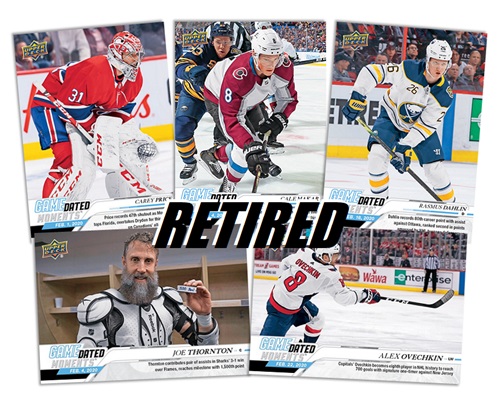