Vs. System 2PCG: Futures Past Card Preview – Not Nice in Any Time Line

Welcome to our third preview for Futures Past. Today we’re going to look at an alternate future’s version of Logan. 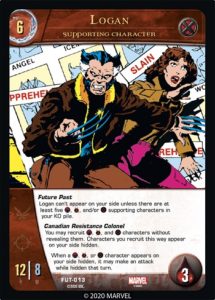 Let’s start at the top (of the card). Since this is a Wolverine from an alternate timeline, and therefore has a different card name, you can have both Wolverine and Logan on your side at the same time. (Similarly, you can’t discard one to power up the other.)

You can recruit characters from the three mutant teams face down (without revealing them), and if you do, they appear hidden (face down and ready) on your side, instead of face up.

While you still must pay normally for cards recruited this way (including any additional costs), you do not have to announce the recruit cost of the hidden cards you are recruiting.

You must also follow any other rules about recruiting, including any restrictions for when a character can appear, including the uniqueness rules.

Hidden cards recruited this way mostly act like other hidden cards: they aren’t stunned, can’t have equipment or +1/+1 or -1/-1 counters, can’t be attacked, and lose their powers. They keep their names and team affiliations. And during your Recovery Phase you must turn them face up when you recover your stunned characters.

But there are exceptions to cards recruited this way compared to normal hidden cards: Only the card’s owner can look at them. And they can make attacks while hidden on the turn they appear, which works like this:

Note: Your opponents will need to verify after cards are recruited this way are turned face that they were played within the rules, especially in regard to their costs and the legality of any attacks they made.

Speaking of face-down cards, let’s take a look at a new Sentinel equipment. 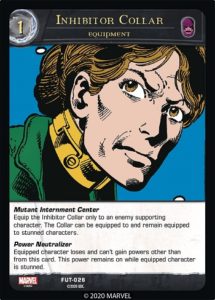 The collar can be equipped to a face-up or stunned character. If that character already has equipment, KO that equipment. When an equipped face-up character is stunned, the Collar remains on (and face up).

But don’t worry, mutants. If a character equipped with the Collar hides, KO the Collar. (They must have figured out how to take it off!)

Now let’s take a look at only the game’s third ever Level 4 Main Character: 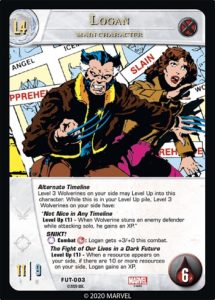 Alternate Timeline grants any Level 3 Wolverine characters on your side a new Level Up power. (If you start the game with a Wolverine Level 3 in your Level Up pile you may also include a Logan Level 4 there.)

When your Wolverine Level 3 levels up with Not Nice in Any Timeline, he’ll become Logan Level 4.

Note: At this point the Wolverine from “our” timeline has grown to become the Logan from an alternate timeline. Which means you could now have a Wolverine supporting character on your side at the same time as your Logan main character (since they are from different timelines and therefore have different card names).

Finally, it took The Fight of Our Lives in a Dark Future, but here’s our first Level 5 main character: 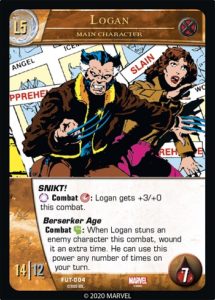 We hope you enjoyed today’s preview. Come back next time for a Summers time preview.