Welcome to our second round of previews for the Omega Arc. Last Issue focused on the alternate timeline of the Future Past storyline. This Issue focuses on the Brotherhood of Mutants including three prominent members of the Freedom Force.

Let’s start off with the leader of the team: 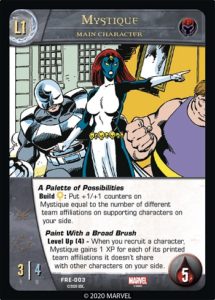 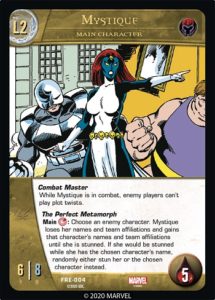 The Perfect Metamorph lets Mystique take the name and team affiliations of an enemy character. And then if she would be stunned, there’s a 50-50 chance the other character gets stunned instead.

Here are a few more details:

Keep in mind, the effect from The Perfect Metamorph lasts until Mystique gets stunned. If it allows her to avoid getting stunned, the effect remains active. In other words, a single use of the power could prevent several stuns to Mystique.

Finally, even if The Perfect Metamorph is active, Mystique can use it again to change her name and affiliations, and to have a different enemy character become her new potential stun replacement.

Our next preview doesn’t just take names. She takes the whole cards. 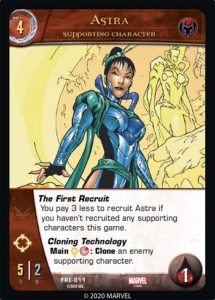 To create a Clone, put a token copy of the chosen character onto your side. The copy has all the printed characteristics (name, team, cost, ATK/DEF, Health, powers) of that character but nothing else. It appears face up and ready, and does not appear with any counters or status effects (like Burn). Uniqueness does apply to the token.

Our final preview for today prefers to take the names of powers. 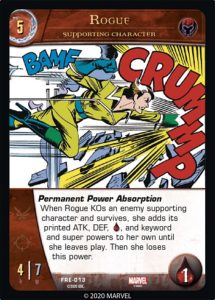 Permanent Power Absorption works like this: Rogue gains an ATK, DEF, and

increase equal to the KO’d character’s printed ATK, DEF, and

She also gains the KO’d character’s printed keyword and super powers. However, once Rogue absorbs the stats and powers from a character, she loses Permanent Power Absorption.

We hope you enjoyed taking names today. Join us next time when things really heat up.