To unlock and purchase these packs, simply add any available hockey trading card product on e-Pack to your cart.* This week’s packs of 2019-20 Game Dated Moments cards highlight top moments from around the NHL® and will be available for purchase** in the Upper Deck e-Pack® Store until 8/14/2020 at 8:59 am (PST).

Blackhawks rookie Dominik Kubalik broke the NHL® record for most points by a rookie in his playoff debut when he dished out three assists and scored two goals in Chicago’s 6-4 victory over the Edmonton Oilers in Game 1 of the teams’ Stanley Cup qualifying series. 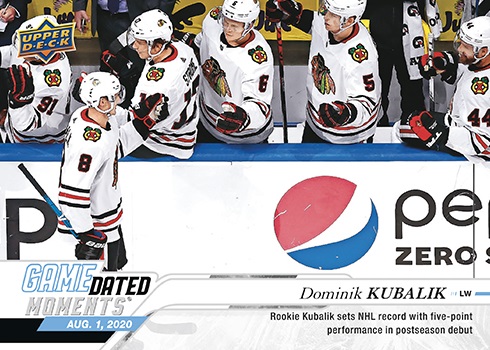 Maple Leafs’ rookie Nick Robertson became the sixth player 18 or younger to make his NHL® debut in a postseason game, and the first since Calgary’s Jarome Iginla in 1996, when he took the ice for Toronto in Game 1 of the Stanley Cup qualifying series between the Maple Leafs and the Columbus Blue Jackets. Robertson recorded 12:28 of ice time with one shot on goal, two hits, and two takeaways. 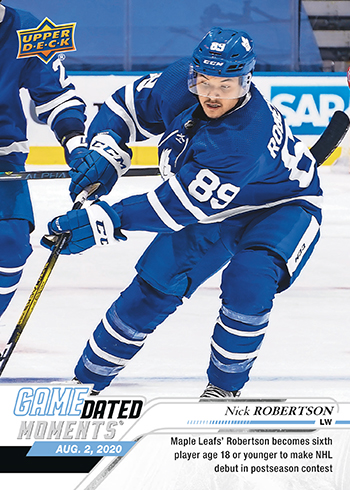