Legendary: Into the Cosmos – Make first contact with some new keywords.

We hope you enjoyed your first look at Legendary®: Into the Cosmos. In that post we took some time to go over Shards, Danger Sense, and Cosmic Threat.  It’s always great when we can bring back some fan favorite keywords! Now let’s take a look at what’s new!

The Celestials are millions of years old and immeasurably powerful. They cannot be truly defeated by mere mortals. However, if you manage to fight a Celestial, it is impressed with your efforts and grants you a Celestial Boon. This is a permanent bonus that helps you for the rest of the game. But beware! If fail to prove your worth to The Celestials by allowing them to escape there will be a heavy price to pay indeed! 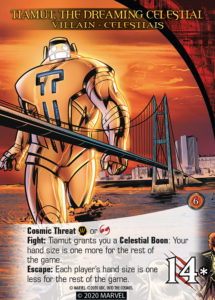 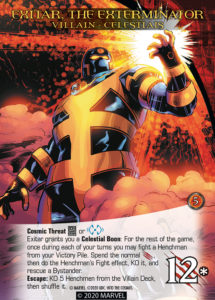 The Grandmaster and the Elders of the Universe are literally immortal. To them, mortal lifespans are merely playthings. This is shown with the new Contest of Champions keyword. Some Villains and Masterminds say things like “Ambush: Contest of Champions 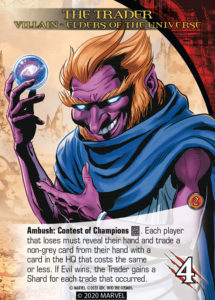 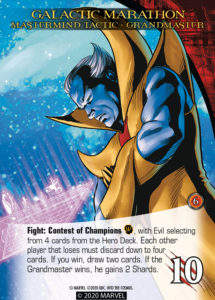 What would a preview be without a glimpse at a couple of the new schemes.

The Contest of Champions scheme is truly an epic battle! To win you must plan ahead and ally with the other players in a joint effort to recruit the proper colors as they appear in the Contest Row. Without careful planning you will surely go down in defeat! 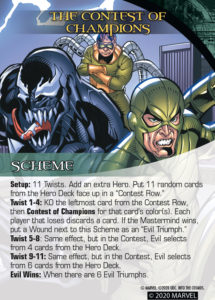 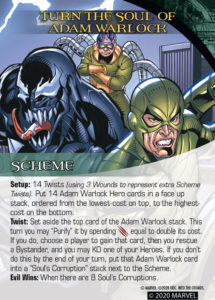 Turn the Soul of Adam Warlock is a race to save for the very soul of Adam Warlock! When a twist is played, you will be forced to choose whether to use your precious attack to purify Adam Warlock or will the need to fight evil be more pressing? The stakes are high, the corruption of his soul! 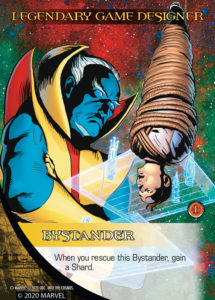 That’s the previews of Legendary®: Into the Cosmos. Excited? We certainly are. This amazing expansion hits stores this summer!


A Devin Low bystander! Love it. This set looks like yet another fantastic addition to this awesome game.