Legendary: Into the Cosmos – An expansion that reaches for the stars.

Far beyond the bounds of Earth, the cosmic Heroes of the Marvel Universe wield incredible interstellar energies. Now they seek aid from Earth’s Avengers, teaming up to stave off truly epic cosmic threats.

Welcome to the first in a series of previews for our exciting new deluxe expansion, Legendary®: Into the Cosmos. Not only are there some long awaited cosmic favorites here but some really great new keywords. I hope you are excited about it as we are!

Shards are back! Trust me, you are going to need them. Shards first appeared in Marvel Legendary®: Guardians of the Galaxy in 2014. If you don’t know how they work or you need a refresher basically when you gain a Shard, put it in front of you. You can spend it to get +1

. You can use a Shard immediately, or you can keep it for any future turn. Simple, right? But watch out Villains and Masterminds can have Shards too making them tougher to defeat!

Burning Shards is an all new way to make use of your Shards. 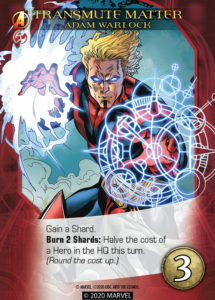 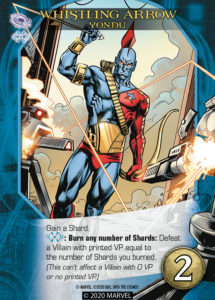 This keyword returns from Marvel Legendary®: Spider-Man Homecoming in 2017. It represents the way many cosmic Heroes possess “Cosmic Awareness” to detect events that will affect them, even from across the galaxy. Beware, Danger Sense has some new twists. 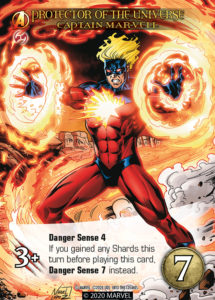 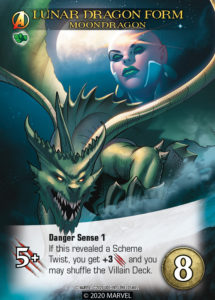 The arrival of the Black Order of Thanos often signals a world’s imminent destruction. Although that world can sense grave danger approaching, they are often powerless to stop it. The Black Order work together to guard each other and their lord. To represent this, these Villains use Danger Sense in a new way. 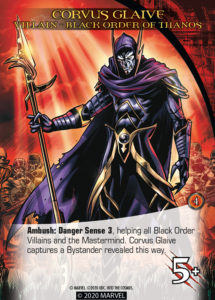 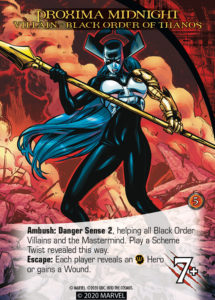 And what better place to bring back the keyword Cosmic Threat than Into the Cosmos!  Cosmic Threat first appeared way back in Marvel Legendary®: Fantastic Four in 2013. Villains with this keyword have incredibly high Attack values with a special vulnerability. 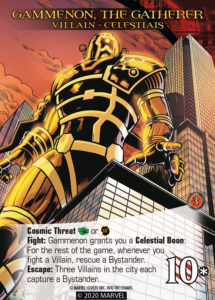 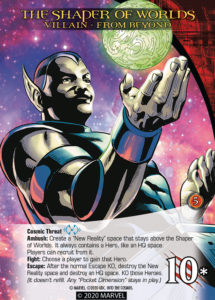 We hope you have enjoyed this first glimpse into Legendary®: Into the Cosmos. Join us next time as we reveal the other new keywords and maybe more…

Legendary®: Into the Cosmos releases in stores Summer 2020.