Vs. System 2PCG: The Frightful Card Preview – Two Men and a Wavy

Welcome to our previews for the Fantastic Battles Arc for Vs. System 2PCG. Today is the first preview article for the 55-Card The Frightful Issue! This Issue has many of your favorite (or least favorite if you’re a goody-goody) Fantastic Four villains! Here we go!

Today we are only going to show you cards that have to do with two villains, but they’re epic! 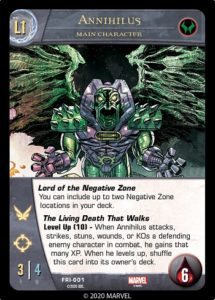 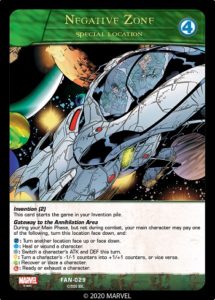 Note that if Mister Fantastic is in your deck, your Invention pile will also include its usual two Negative Zones.

The Living Death That Walks grants 1 XP for each of the listed actions. So if Annihilus attacks, strikes, and stuns a defending character, but somehow doesn’t wound or KO it, he will gain 3 XP.

And don’t miss that when he levels up, you shuffle his Level 1 card into your deck. Wacky! 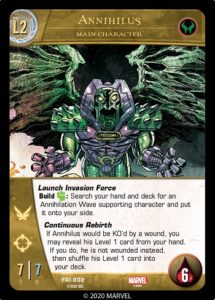 Note that while the Level 1 is in your hand, you could use it power up Annihilus in a pinch. (And you could play it face down as a resource, in a super pinch (a squeeze?).)

And here’s his Invasion Force: 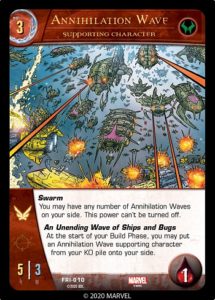 This card really bugged us during playtesting.

Anyhoo, next on to our second guest today, who you could say is always on time. 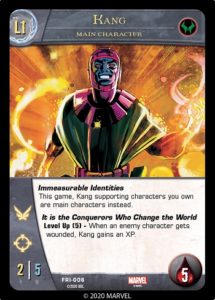 We’ll get to the Kang supporting character in a second, but first a couple notes on this guy.

This effect lasts the whole game, even if your starting Kang main character gets KO’d. And remember this too – as long as you have any main characters on your side, you don’t lose the game. 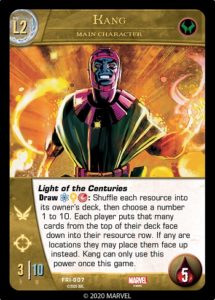 Whoa, this guy is serious! Hey, when you mess with a time-traveler, these are the sort of shenanikangs he gets up to.

But what about those Kang supporting characters? 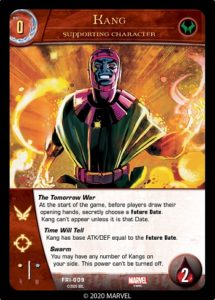 More shenanikangs?! From the rules:

If any number of Kang supporting characters are in your deck, The Tomorrow War lets you pick a single Future Date before players draw their opening hands during setup. You must tell your opponent that you are doing this but keep your choice secret!

Not bad for two guys just trying to make it in the universe!

Hope this got your mind a-thinkin’, and we’ll see you next time for morg previews!

Vs. System 2PCG: The Frightful arrives on July 15th!


Does recruiting a Kang SC result in your MC (who doesn’t have swarm) being discarded?