The collectors have spoken and Upper Deck is proud to announce your selections for the final 10 cards on our list of the top 30 photographs from Upper Deck base set NHL cards.

After releasing the initial list of 20 cards that helped define three decades of collecting, we took to our social media channels and asked collectors to submit their favorites that were not part of the group. We had some excellent responses and plenty of discussion, but here is a chronological list of the cards that captured the imagination of those that pulled them out of packs: 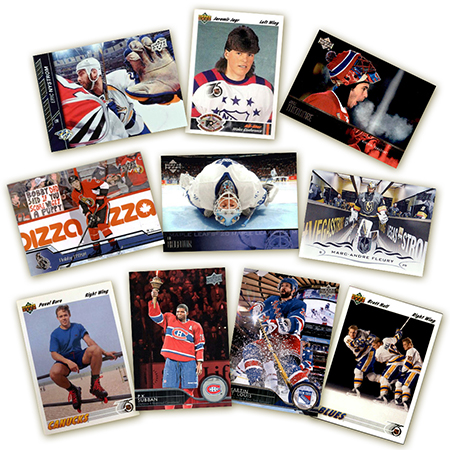 Upper Deck identified some of our top photos from the last 30 years, but we wanted fans to have their say as well!

Upper Deck pulled off a major coup in its first season by managing to get hot prospect Pavel Bure inked to a trading card deal – a decision which helped make that year’s High Number series one of 1990-91’s biggest hits. This card was the prime rookie card to be found in that landmark release and it was part of the initial crop of Young Guns, kicking off a hobby tradition which continues to this day. This photo captures the budding superstar in the aftermath of winning a medal at an international tournament. According to the folks at Elite Prospects, Bure captained the Soviet Union to gold at the 1989 U-18 Worlds, so this photo is potentially from that event.

Savvy collectors at the time knew that the young Russian Rocket was going to be great thanks to an epic performance at the 1989 World Junior Championship before the Vancouver Canucks managed to snag him in the sixth round of that year’s draft. Spending the next two seasons with the Red Army club in Moscow, he joined the Canucks early in 1991-92 and went on to become a member of the Hockey Hall-of-Fame. 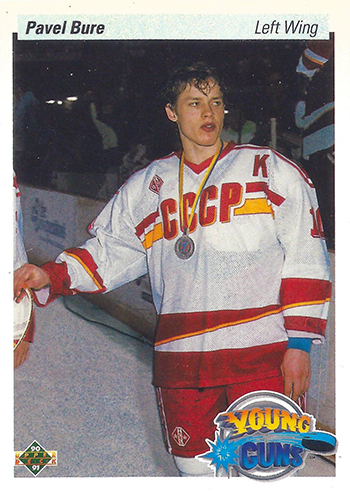 Heading into the 1991-92 season, the hockey world was hyped about the debut of the San Jose Sharks. Even before the team hit the ice, Upper Deck was on top of things and took some great studio portraits of several players slated to be a part of the club’s opening lineup heading into their first game against the Vancouver Canucks on October 4, 1991. The over-the-shoulder pose didn’t signal the start of a modeling career, but you have to love that classic Sharks jersey – a huge seller at the time thanks to an awesome logo (designed by Terry Smith) and lots of teal.

One of those players skating in that road loss was Bob McGill, a bruising defender that already had 10 seasons under his belt. Never a big scorer he managed to put up three goals and an assist over 62 games with the expansion club before being traded to the Detroit Red Wings on March 9, 1992 for Johan Garpenlov. In retirement, McGill eventually moved into the world of broadcasting. 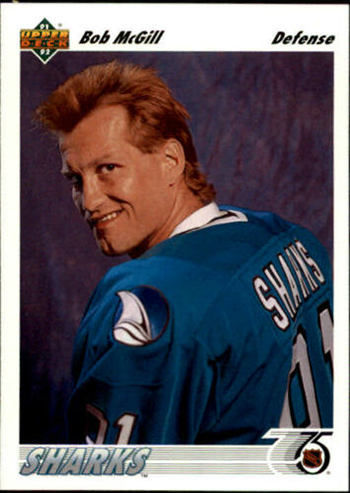 As Patrick Roy and the Canadiens were on their way to the Stanley Cup in 1992-93, collectors were salivating over one of St. Patrick’s most compelling hockey cards as it was being yanked out of Upper Deck flagship packs.

Roy, who has a lifetime love for hockey cards, certainly could not find fault with this masterpiece. The photo, taken by Sports Illustrated’s David E. Klutho, captures the legend in mid-air as the late Zarley Zalapski slid into the net during Game 7 of Montreal’s first round clash with the Hartford Whalers on May 1, 1992. The Habs would prevail in double overtime that night thanks to a goal by Russ Courtnall. 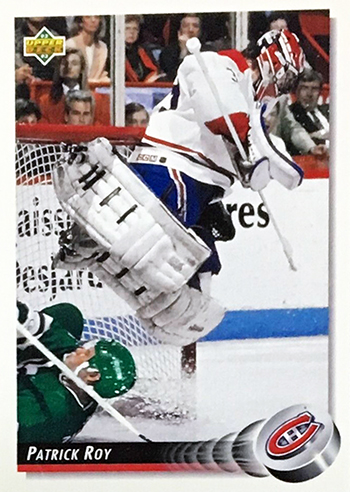 Mike Grier was at the dawn of his lengthy NHL career when he was candidly caught having a snack in the dressing room. Little did he know that moment would live on forever in the form of his 1997-98 Upper Deck card.

An instant hit with collectors, it may sit in the commons bin – but there is nothing common about it. As an interesting bit of trivia, his father, Rosie, was a legendary player in the NFL. 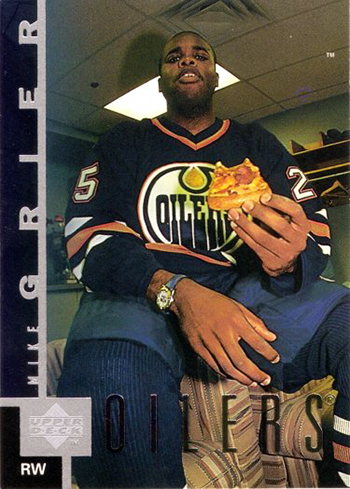 Small in stature, but huge on talent, Theo Fleury is one of the most compelling players of his generation and he had some memorable Upper Deck flagship cards throughout his career. In the 1990-91 season, he delivered a check and the following year had a great shot where he is jumping over the boards.

The one card that collectors seemed to react to, though, came from 2000-01 Upper Deck. At this point, he had moved on to the New York Rangers and this photo captures a grizzled veteran who was still one of the league’s most exciting talents – possibly celebrating a goal. If it was the case where he did score against the Tampa Bay Lightning during the 1999-00 season, this shot would be from New York’s 6-3 road victory on November 24, 1999. 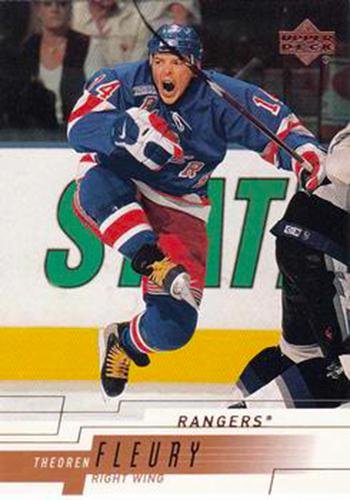 The Ottawa Senators made their only run to the Stanley Cup Final to date back in 2007. The club had an incredible mix of talent and Heatley led the way during the regular season with a career-best 105 points in addition to leading the league with 10 game-winning goals.

After eliminating the Pittsburgh Penguins and New Jersey Devils in the first two rounds, Heatley and the Sens continued to dominate in the Eastern Conference Final against Buffalo. Heading into Game 5 on May 19, 2007, Ottawa was on the cusp of winning another series when this incredible shot of Heatley pushing Tim Connolly into the bench was captured during the first period by the lens of Getty photographer Elsa Garrison. It was part of an incredible night for Heatley as he scored Ottawa’s first goal, added an assist to tie things up, and then helped set up the overtime winner by Daniel Alfredsson. 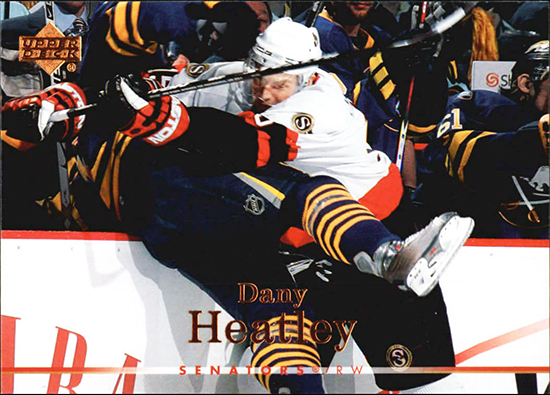 The rivalry between the Montreal Canadiens and Boston Bruins is almost a century old and every game between the two clubs has the potential to be an epic affair – especially in the playoffs. Back in 2010, the two teams clashed in the first round yet again and this incredible mid-air shot of Milan Lucic was shot by Brian Babineau. Now, old-time collectors may be aware of the Babineau family’s connection with the Bruins and other Boston-area sports teams as Brian, and his father, Steve (who shot some of the most memorable trading card photos in the 1970s and 1980s), have been shooting for decades.

This moment was from Game 1 of the Eastern Conference Quarterfinals on April 14, 2010, and Upper Deck’s photo editors cropped the original shot down nicely. The full photo not only features Hal Gill in the background, but it also features the stick of P.K. Subban, who was cut off of the card. Despite Lucic’s attempt to mimic the legendary Cup-winning goal of Bobby Orr from 1970, the Bruins were shut out by a 2-0 margin that evening. They would, however, go on to win the series – and their first championship in 41 years. 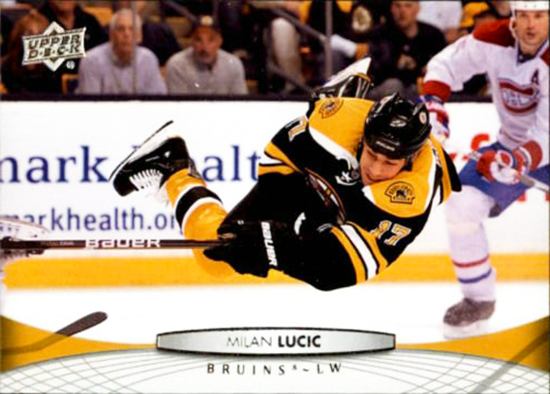 At first glance, a collector might focus on the awesome photo on the front of this card, but it is also a reminder of the excitement surrounding the Atlanta Thrashers relocating to Winnipeg in time for the 2011-12 season.

The Thrashers had few successes after coming into the league in 1999-00, but Dustin Byfuglien was one of the team’s marquee names making the move. Big Buff started his career in Chicago and after winning a Stanley Cup in 2010, found himself heading south. His only season in a Thrashers uniform was impressive as he posted 20 goals and 53 points to finish second on the team in both categories.

This great candid shot was taken during a break in the action by Getty’s Scott Cunningham at the Philips Arena on December 18, 2010. The New Jersey Devils were visiting that night and Byfuglien’s good mood was no doubt due to the fact that the Thrashers were in the middle of what proved to be a 7-1 victory. 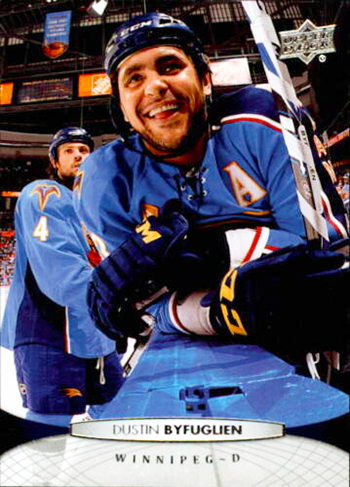 The excitement and electricity in any NHL arena before the game starts is something to behold and the effort that teams put into production before the puck even drops is impressive. This is something that has evolved at an amazing pace over the years and Upper Deck has been able to deliver many memorable flagship cards of players heading to the ice.

This particular shot by Mark Blinch from last season’s set stands out for a few reasons. First, there is something special about a game in Toronto – especially if you are there in person or watching it on television. Second, you have one of the game’s brightest young stars in Mitch Marner, who had delivered a great sophomore effort in 2017-18 and has a strong hobby following. This photo was also taken before a key contest, Game 4 of the opening round series against Boston on April 19, 2018. With Toronto down 2-1 in the series, the Leafs fell 3-1, but Marner assisted on his team’s only goal. Ultimately, the series went to a nail-biting seventh game which saw Boston prevail. 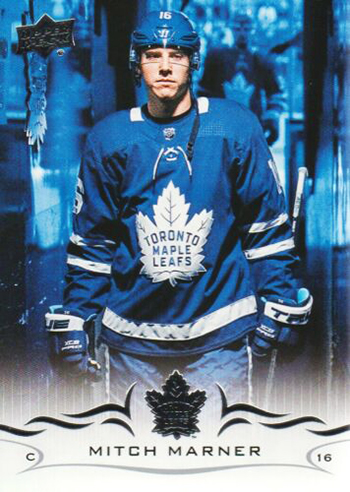 The 2018 Stanley Cup Final delivered a story which instantly found an important place in hockey history. With the expansion Vegas Golden Knights making their improbable run and Alex Ovechkin leading the Washington Capitals, many fans were torn between rooting for an upstart club and a grizzled vet who was hungry for his first championship.

Once the Capitals prevailed in five games on June 7, 2018, Ovechkin was ready to hoist Lord Stanley’s Mug. First, he graciously accepted the Conn Smythe Trophy as the postseason’s Most Valuable Player, but he was really after the big prize and held it aloft for the fans in Las Vegas. This card features a perfect shot from David Becker and captures the emotion of winning hockey’s greatest prize. 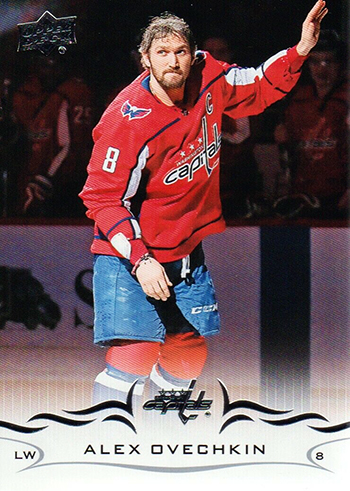 
I have all these cards and I am very surprised that Jaromir Jagr’s rookie card who is the second highest player in the NHL after Wayne Gretzky is worth nothing. The same for Pavel Bure who is also a great player.