Welcome to our previews for the First Family Arc for Vs. System 2PCG. Today is the fourth preview article for the 200-card The Fantastic Battles Issue that kicks off the Arc! Let’s get to it!

You know him, you love him, and here he is! 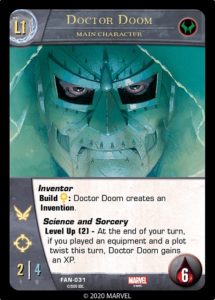 Doom can invent all the neutral Inventions like Reed can, and he has one unique invention: 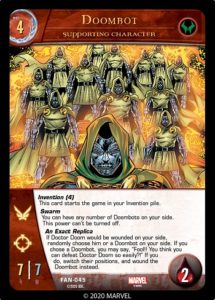 Speaking of Doombots, here is someone who likes them maybe even more than Doom himself! Well, he sort of was Doom! 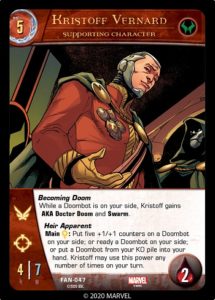 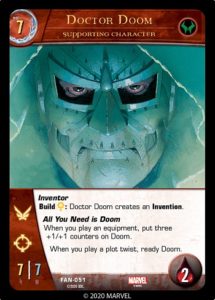 But let’s not get distracted – back to the main characters! 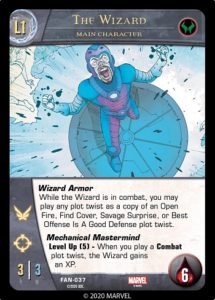 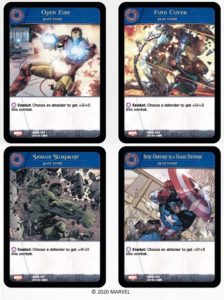 Plot Twists found in the 2015 Vs. System 2PCG: The Marvel Battles set.

Wow, he is a tricky guy! 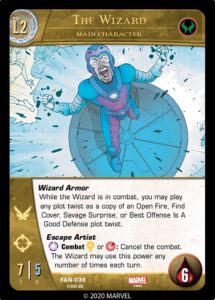 Even trickier! But what if we wanted the most powerful main character we’ve ever represented? Can we handle it? 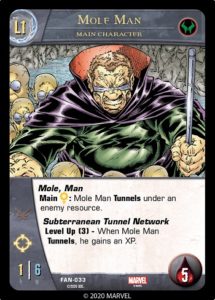 Mole Man can Tunnel beneath enemy resources. If there are any enemy Locations, he must tunnel under those first. If there are none, he can tunnel under a face-down resource. When he Tunnels, remove him from the game and place him beneath the card he is tunneling under. At the start of your next turn, put him back onto your side and if the card he was under was a Location, turn it face down. If it was already face down, KO it.

So, he hides while he tries to ruin your resource row. Moley mole mole indeed! And he gets even better! 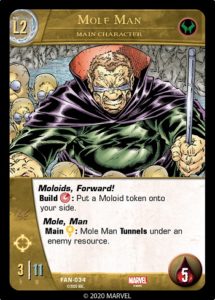 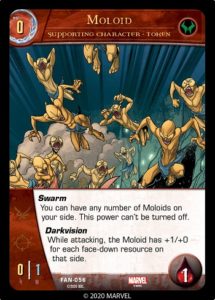 He’s not the only weird guy on the team… 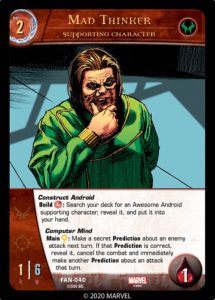 Very pensive! The Mad Thinker’s Computer Mind is so powerful he can very accurately predict what his enemies are going to do. When you make a Prediction, secretly write down the name of two characters: an attacker and a defender. The names don’t have to be characters in play at the time Mad Thinker uses the super power. When a character with the attacker’s name attacks a character on your side with the defender’s name (even in a team attack), cancel the combat. Then make another Prediction about the same turn, but this time you’ll have a lot more data! You can make a maximum of two Predictions from each use of the super power.

And he makes friends easily! And literally! 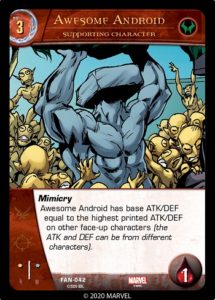 Awesome! Note that the Android’s base ATK and DEF do keep resetting as the board state changes. So, of course, if there are no other face-up characters, his stats become 0/0, and he will get stunned. The same is true if Mimicry is turned off. Sad.

But what if you aren’t great with technology, like everyone’s dad? Well, you can just try to make friends a different way! 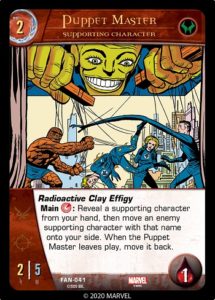 But if neither of these creepy ways to make friends works for you, you’ll need another idea! 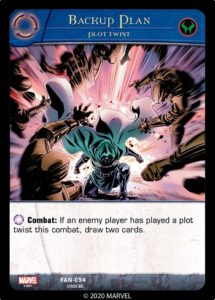 Before we go, I suppose we should look at Level 2 for Doctor Doom? 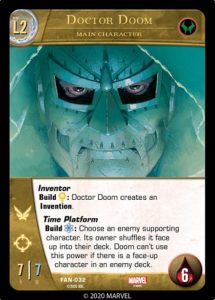 Fools! Face-up cards are the wave of the future! Doom is always ahead of the game!

Note that face-up cards’ locations in decks is public information – we suggest players turn the card sideways so it’s very clear where it is. If a player needs to shuffle or cut a deck with a face-up card, just do it without looking (or ask a judge to do it in a tournament), then find the card and turn it sideways again.

Thanks for reading, and we hope you enjoyed the cards today! Before we go, let’s look at one last card that shows the far-reaching influence of Doctor Doom! 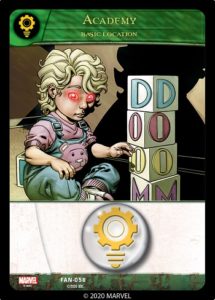 Vs. System 2PCG: The Fantastic Battles arrives on May 13th!