Hi Vs. System 2PCG fans! Welcome to our final preview for our third Issue of The Verse Arc: Webheads!

Today we’re going to check out some heroes of the multiverse as well as new look for the original Spidey. 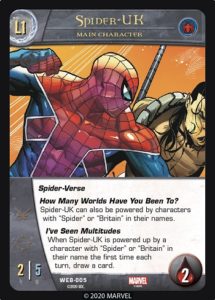 A British Spider-Man from another universe, Spider-UK is a new Main Character with the Spider-Verse keyword. As a refresher, Spider-Verse means two things:

Second, during your Build Phase, if a character with Spider-Verse is in your hand, you may put it onto your side.

Note: Spider-UK can be powered up by any character with “Spider” in their name, including Main Characters that are in your hand.

Don’t be spooked by our next preview: 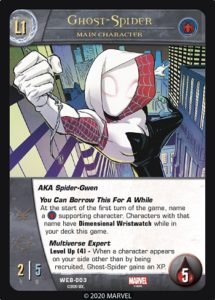 Announce you’re recruiting it from your deck, search your deck for the character, shuffle your deck, and then recruit it (pay its cost and put it onto your side).

If a character with the chosen name gets put back into your deck somehow, it will regain Dimensional Wristwatch while it’s in your deck.

Of course, Ghost-Spider will need her wristwatch back eventually… 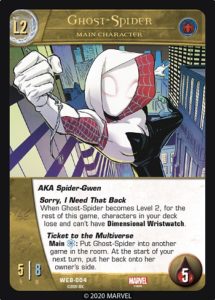 If Ghost-Spider enters another game of Vs. System 2PCG, you decide which player gains control over her. She can attack, gain counters, get stunned, get KO’d, etc., just like in her original game. However, no matter what happens she will still go back to her original game at the start of your next turn. When she jumps back, any counters, Equipment, etc. that she gained in the other game will be removed.

If Ghost-Spider enters a game that isn’t Vs. System 2PCG, it’s up to the players in that game to decide exactly how she works in that game.

For example, if she enters a game of Legendary: A Marvel Deck Building Game, perhaps she generates 5 ATK and then goes to a player’s discard pile.

Now let’s dive back into the main Marvel Universe and checkout that time Peter got all Iron Spidery: 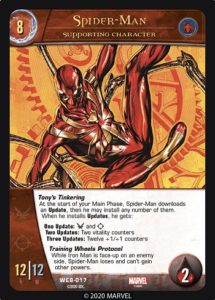 When Tony’s Tinkering lets Spider-Man download an Update, put an Update counter on him. (You can use a coin, bead, slip of paper, or an XP counter to keep track of Spidey’s Updates.) When Spidey installs Updates, you may remove any number of Update counters from him.

If you remove exactly one Update he gains

You can remove the same number of Updates more than once. For example, if you remove two Updates for a second time, Spider-Man will get two more Vitality counters.

Note: Update counters aren’t removed from Spidey when he gets turned face down. However, they are still removed when he leaves play.

Sometimes a Spider-Person needs to customize their equipment without resorting to a full makeover. 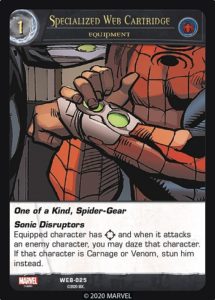 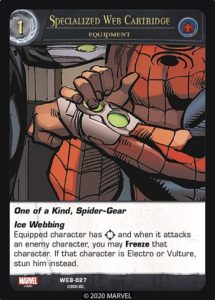 Spider-Gear means this Equipment can only be equipped to a character with “Spider” in its name. Each Specialized Web Cartridge grants

and an attack power. Note: The attack power will trigger whether the equipped character is making a melee or ranged attack.

We hope you enjoyed today’s preview. Tune in next time for something absolutely fantastic.