Vs. System 2PCG: Webheads Card Preview – Time for a Change

Hi Vs. System 2PCG fans! Welcome to the second set of previews for our third Issue of The Verse Arc: Webheads!

Today’s first preview is a humble one-armed scientist. I mean, he’s smart, but it’s not like he can turn into a deadly monster or anything like that… 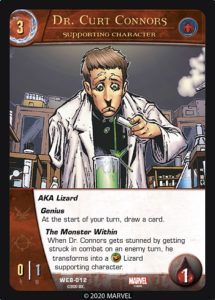 Okay, well, I guess he turns into this deadly monster. 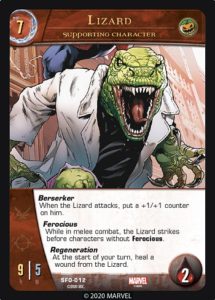 For every Dr. Connors in your deck, you must also bring that many copies of Lizard (from the Spider-Foes expansion), which will start in an out-of-game Lizard pile. When The Monster Within transforms Dr. Connors after he is stunned, remove him from the game and replace him with a Lizard from your Lizard pile.

Note: Since this is a “transformation”, the Lizard will keep any counters, effects, and orientation (ready/exhausted and face up/stunned) that Dr. Connors had (including a wound counter since he was just stunned).

Note: If somehow you don’t have any Lizards in your Lizard pile, The Monster Within won’t do anything. 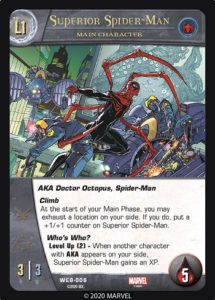 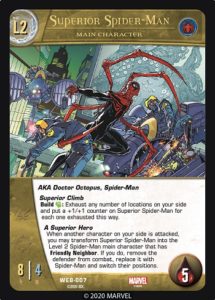 In the comics, Doc Ock took over Peter’s body, and for a while he believed he was the superior Spider-Man. In the game, A Superior Hero represents Doc Ock’s realization that Peter’s selflessness actually makes him the superior hero.

When another character on your side is attacked, you may transform Superior Spider-Man into the Level 2 Spider-Man with Friendly Neighbor from the Marvel Battles set. (The very first Vs System 2PCG set.) If you do, remove the defender from combat, and replace it with your new Spider-Man Main character.

Note: Since this is a “transformation”, Spider-Man will keep any counters, effects, and orientation (ready/exhausted and face up/stunned) that Superior Spider-Man had. 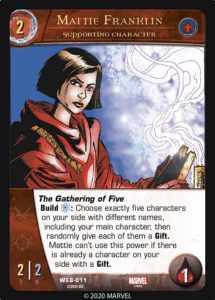 If Mattie is in your deck, you can bring a Gift pile, which must include one of each of the five Gifts: 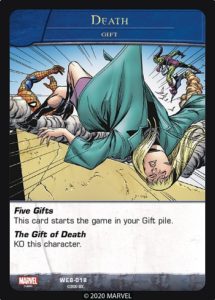 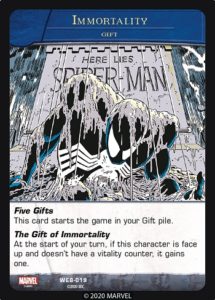 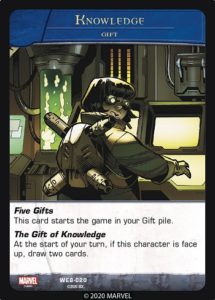 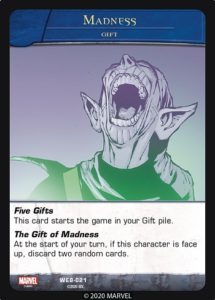 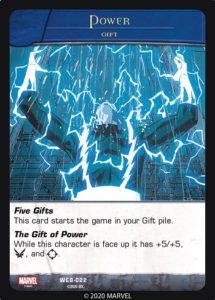 When Mattie uses The Gathering of Five, choose exactly five characters on your side with different names. At least one of them must be a main character on your side. (If you have more than one main character, you only have to choose one of them, but you can choose multiple if you like.)

Then randomly assign one of the five Gifts to each of them.

Gift cards are not actually in play. Their cards are just play aids to remind everyone what new abilities each character has gained. If a character leaves play, its Gift will no longer affect them (even if that character reenters play).

We hope you enjoyed today’s preview. Tune in next time for some new looks at Spider-Heroes from the multiverse.