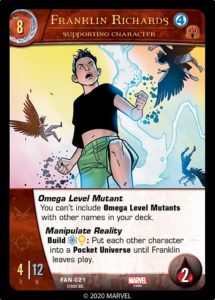 First of all, you will note he is our first Omega Level Mutant — but not our last!

For Pocket Universe, get comfortable for some rules – but it’s worth it!

Franklin is one of the most powerful beings in the multiverse. So powerful he has been able to, from a young age, create a Pocket Universe. Here’s what happens when he does that:

A Pocket Universe turn sequence is a little different than a normal turn, as follows:

When Franklin leaves play, the characters from each Pocket Universe he created pop back into the original universe part of the game, in the same rows and with the same orientation they were in their Pocket Universe.

Whew! That was long! I hope you liked/read it! We debated about trimming it, but it’s sort of awesome in its length! Like the Grand Canyon, you don’t understand its immensity until you see it in its full glory!

So, no questions, I assume? Pretty straightforward stuff… (Mark, please disable comments and phones everywhere). It will all be fine!

Before Mark had a chance to lock down the comments, a few questions popped up.

1) What happens if a character in a Pocket Universe temporarily leaves play and then re-enters play? (Some examples of effects like this are Elektra (main character), Singularity (supporting character), and Doorman.)

2) If a Main Character is KO’d and replaced by a new one (i.e. Sinister Six), which Universe would it appear in?

The new Main Character appears in whichever Universe the previous one was KO’d in.

3) If Dark Phoenix is recruited while there’s a Pocket Dimension, does her Deconstruct the Universe affect it?

Join us next week as we fill out the ranks of the Fantastic 4!

Vs. System 2PCG: The Fantastic Battles releases on May 13th!


If Death is in a pocket universe does she still get boosted by the KO pile?


Your hand, deck, KO pile, and out-of-game piles can be accessed in both the original universe and the Pocket Universe.


Yes. She affects the entire game, not just the universe she appears in.