To unlock and purchase these packs, simply add any available hockey trading card product on e-Pack to your cart.* This week’s packs of 2019-20 Game Dated Moments cards, which are the second week of All-Time Game Dated Moments highlighting top moments from past NHL® seasons, will be available for purchase** in the Upper Deck e-Pack® Store until 4/10/2020 at 8:59 am (PST).

Though he had not made an official announcement at the time, Mark Messier shared an emotional farewell to the sellout crowd when he waved goodbye with tears in his eyes after a 4-3 home loss to the Buffalo Sabres. In the first period of the game, Messier found the back of the net for the 1,887th point of his career, which still stands as the third-most career points in NHL® history. 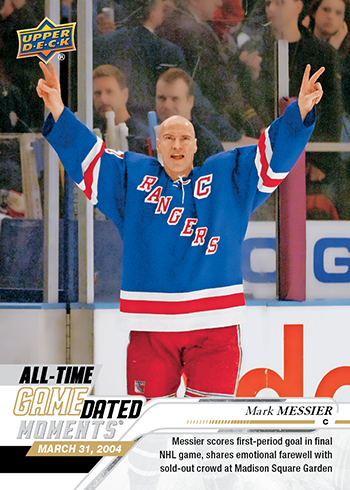 In a 4-1 loss to the intrastate-rival Philadelphia Flyers, the Penguins Captain recorded the 300th goal of his storied NHL® career, becoming just the 18th active NHL® player and 186th overall player to reach the 300-goal milestone.