Vs. System 2PCG: Spidey-Foes Card Preview – Working Together, How Can We Fail? 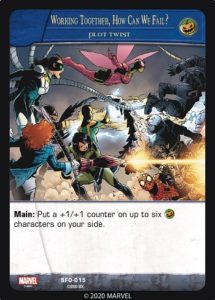 Now that I think about it, I guess there are *some* ways we could still fail. Maybe our opponent uses Doctor Strange to transmute all our +1/+1 counters into -1/-1 counters. Maybe I forgot to put

characters into my deck. Maybe when I try to put the counters on my characters, they slip out of my fingers onto the floor, and the floor is also lava so they all melt, and also we have to leave the area because of the lava.

But other than those equally unlikely scenarios, HOW CAN WE FAIL?!

Okay, so go with me on this. You’ve just played Working Together, How Can We Fail and attacked with six +1/+1 counter-enhanced villains. Now what? Are you ready to find out? (Hint: I put “ready” in italics because the next card involves readying characters.) 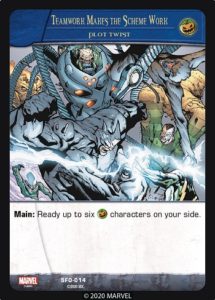 Here’s a quick development story about this card. Originally it only readied five characters, but in testing we found that was too weak. So then we tried where it could ready seven characters, but that was too strong. After hours of deliberation, hand-wringing, and yodeling, we finally decided to flip a coin. It came up “6” so that’s what we went with.

Our next preview pair of previews continue today’s theme of working together: 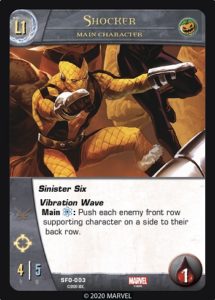 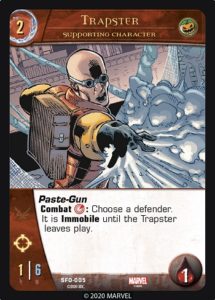 Shocker shoves ‘em back, and Trapster… sprays them with paste so they can’t move. What a sticky situation!

We hope you enjoyed today’s preview. Tune in next time for many (un)happy returns!