Hi Vs. System 2PCG fans! Welcome to the first previews of our second Issue of The Verse Arc; Spider-Foes! Today’s theme is make believe.

For example, our first character has made a (criminal) career out of pretending he’s someone he’s not. 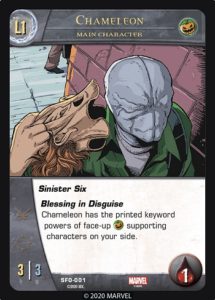 Chameleon is the latest edition to the Sinister Six squad. Note: If he appears in the middle of the game, he will copy any “appears” powers on face-up

supporting characters on your side.

Our next villain can pretend that ATK is DEF and DEF is ATK. 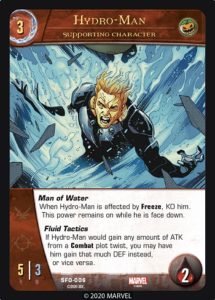 Fluid Tactics lets you convert ATK from a Combat Plot Twist into DEF (or vice versa). For example, if you play a Plot Twist that gives him +3ATK, you could have him gain +3DEF instead. (It has to be all or nothing. You couldn’t convert that +3ATK into +2ATK and +1DEF.)

Speaking of Plot Twists, here’s one for when you’re only pretending to be unarmed! 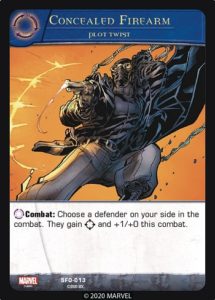 In a melee combat you can play Concealed Firearm just for the ATK pump (or DEF Pump if you’re Hydro-Man and are feeling fluid). But against a ranged attack, it will let you shoot back against an unsuspecting foe.

Finally, let’s enter the Sinister Syndicate’s lair and find out who they have hidden away. 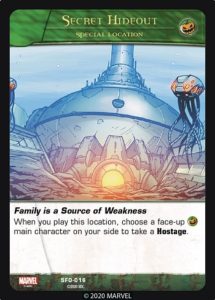 If you have any Secret Hideouts in your deck, you must bring a Hostage pile, which includes one or more different

Supporting Characters that have the Friends and Family keyword. 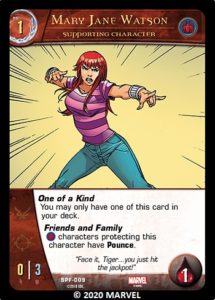 Find Mary Jane inside the 2018 Vs. System 2PCG: Spider-Friends expansion.

For example, if you take Mary Jane Hostage, your Main Character will gain Pounce while it’s in your front row. (It doesn’t have to be protecting anyone.)

It’s possible for the same Main Character to have multiple Hostages (one for each Secret Hideout you play while you have that Main Character).

There are currently only four characters with the Friends and Family keyword, but it’s possibly there may be one or two (or three) more in this Arc’s next Issue.

We hope you enjoyed today’s preview. Tune in next time for a preview that’s all about togetherness.