Vs. System 2PCG: Friendly Neighborhood Card Preview – You Don’t Want Any Part of This (or do you?)

Welcome back VS. System 2PCG fans! Today is our final preview of the Friendly Neighborhood Issue.

Let’s start off with the most “mysterious” character in the MCU. 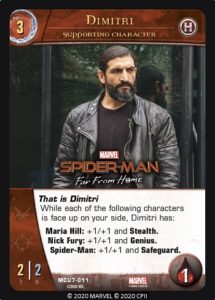 Now for the second most mysterious character in the MCU. 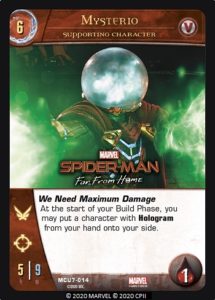 Hologram is a new keyword found on overpowered characters that gives your opponent a chance to “see through” the hologram in order to stun it. Each Hologram has an associated power symbol. If an enemy character with that type of Super Power appears, it automatically stuns the Hologram.

For example, say you have this character: 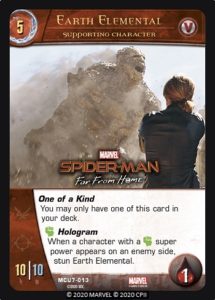 If an enemy character with a

, regardless of any additional or alternate costs the Super Power has.

Now that we’ve met Mysterio, let’s find out what he wants. 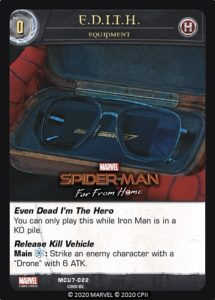 Release Kill Vehicle works like a character on your side with 6 ATK is striking that enemy character. Note: You can play E.D.I.T.H. as long as an Iron Man character is in any KO pile. This includes characters like Tony Stark who have AKA Iron Man.

While Mysterio might be glad Iron Man’s gone, not everyone is. 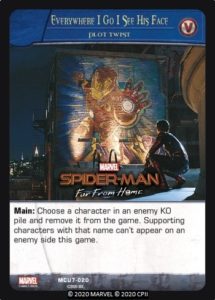 So for example, if you chose a Dimitri in an enemy KO pile to be removed from the game, this will prevent all future copies of Dimitri from appearing on an enemy side. Of course, you can still play your own copy of Dimitri. And you should. Dimitri!

We hope you enjoyed this preview of Dimitri and some other cards. Tune in next time a things get even more mysterious