Welcome VS. System 2PCG fans! Today we’re starting our previews for The Verse. This Arc starts off with a Photographic Universe Issue featuring Spider-Man: Homecoming and Spider-Man: Far From Home. The second and third Issues add more Illustrated content for the Sinister Syndicate and Spider-Friends teams.

Let’s start things off with the Spider-Man himself: 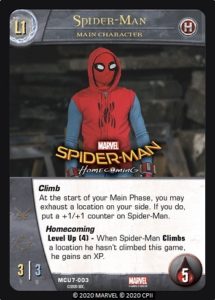 Now let’s see what Peter learns from all his traveling. 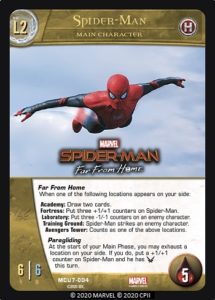 Once Spidey levels up, every basic location you play will generate a different effect. And if you play an Avengers Tower you get to pick which effect you want!

No matter how far from home Peter goes, he knows his Aunt will support him: 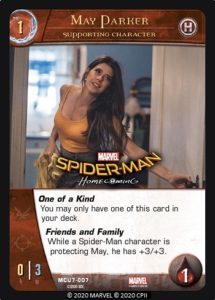 May borrows the Friends and Family keyword from the Illustrated Universe. But one crucial difference is that she only grants the bonus to Spider-Man himself. (Although it is a pretty big bonus!)

Here’s another parental figure who’s sometimes around and sometimes not. 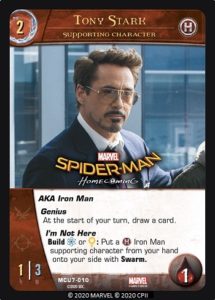 I’m Not Here represents how sometimes Tony is busy elsewhere so he sends an empty Iron Man suit to look after Peter. 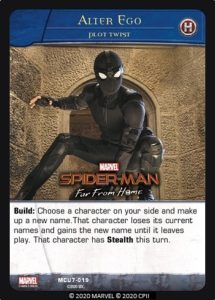 “Make up a new name” means you must rename a character card with something that is not already the name of a character anywhere in the Vs System 2PCG. Some examples of made-up names are “Night Monkey”, “Tiger”, and “The Menace”.

Removing a character’s current names (which also makes the character lose its AKAs) and replacing it lets you get around uniqueness rules. For example, if you change Spider-Man’s name to Night Monkey, you can now play or have another Spider-Man card in play at the same time since they now have different names. (On the other hand, you can no longer discard a Spider-Man character to power up Night Monkey.)

Note: If a character references itself in its text box, those references will also now use its new name.

We hope you liked your first look at this Issue. Come back next time to meet a high-flying foe!