I manage our Customer Care team and one of my reps brought an interesting situation to me just a few days before Christmas. One of our customers named Steve purchased some boxes for his son before Christmas to have for him under the tree for the holiday. Steve is a working father so he asked his neighbor to grab the box when it arrived. Now his neighbor is a little older and he LOVES the Boston Bruins. He didn’t realize it was a gift and when it saw it was from Upper Deck, his curiosity was piqued. He just wanted to see what was inside, so he opened the box.

When he saw there were Upper Deck cards inside it took him back to his youth. How fun is this? Without thinking, he opened the boxes and packs. Not to keep the cards, but to just check them out. If he pulled any Bruins, maybe he could work out a trade with his neighbor. When his neighbor arrived later that day to retrieve the package, Steve was devastated to see they had been opened because how was he going to give this to his son for Christmas? His neighbor felt terrible.

My rep asked me what we could do because he knew it wasn’t the norm, but he wanted to help this family out. I agreed. We got approval from our head of finance to send a package out via air delivery to this family on the other coast so it would arrive in time for Christmas. We used some product from our marketing/advertising allocation to replace what had been opened. We included some Upper Deck apparel as well to make sure this young fan had a great Christmas. 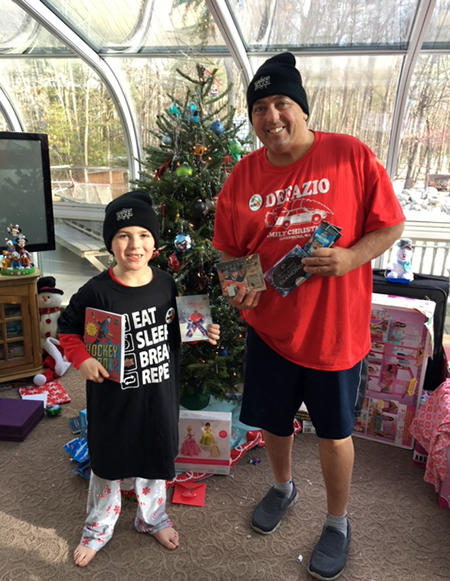 With the arrival of this package all was forgiven. We were happy to see this nice image of Steve’s son with the neighbor. Oh, and we included a couple Boston Bruins inserts in the package with the understanding he’s not to open any more packages from us in the future unless they are addressed to him. 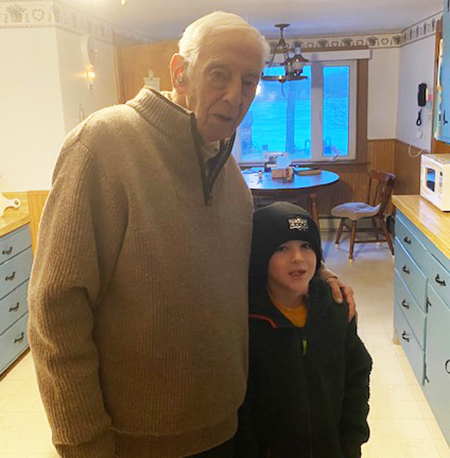 Steve shared, “When I brought the inserts over to my neighbor the day after Christmas, he was very excited. He told us some stories about great hockey moments and collecting when he was younger. On Christmas my son and I played pack wars together with the product you sent and made some great holiday memories. Thanks again Upper Deck!”

We were happy we could come up clutch and make the assist for this family. If you’re looking to grab some product yourself, visit our online store at UpperDeckStore.com, just have a neighbor who isn’t a sports fan get the package if you’re not home! J