Vs. System 2PCG: Crossover Vol 2 card preview: Into the Multiverse

Welcome back everyone to the third and final preview for the 2019 Crossover Issue for VS. System® 2PCG®! This Issue features new cards for eight teams previously featured in the game. But today we are only talking about one team – the best team – the Spider-Friends!

But before we can get to those wonderful heroes, we need to set the stage with their antagonist this Issue. Morlun and his family have decided to rid the multiverse of every Spidery being they can find in the Spider-Verse. That sounds bad! 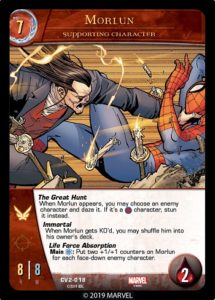 Remember that daze means to stun the character without wounding it.

I don’t know about you, but I sort of want Lesslun, not Morlun. OK, moving on.

Let’s get to some Spider-Verse characters, starting with the most powerful. 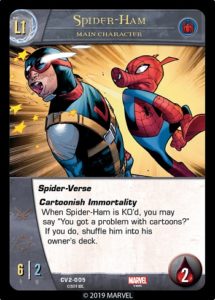 Do you have to say it like he says it? No. Is it really weird? Yes!

But what does Spider-Verse mean? Well, it’s quite the loaded term. Rules to the rescue!

The second thing Spider-Verse means is this: During your Build Phase, if this character is in your hand, you may put it onto your side. (Note: This doesn’t count as recruiting the character.) Putting a second (or third or fourth) main character on your side not only increases your side’s strength, but it will keep you in the game longer since you aren’t knocked out of the game until all main characters on your side are KO’d.

Now let’s get to the three other Spider-Verse main characters! Note that each of them (like Spider-Ham) is only Level 1 and has no other levels. 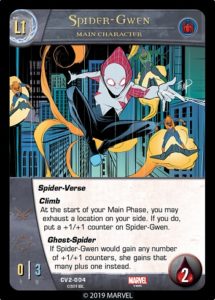 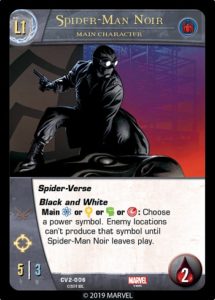 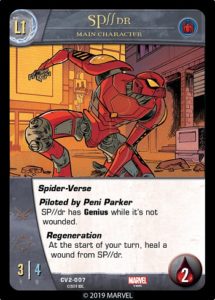 A couple notes on these guys:

Although the Spider-Verse keyword means two different things, there is even another way to interact with it! We know you can handle it!

Did you think we forgot the standard-bearer for the Spider-Verse, Miles Morales himself? 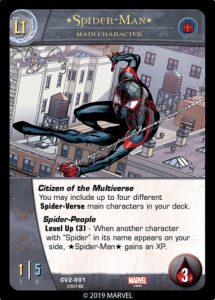 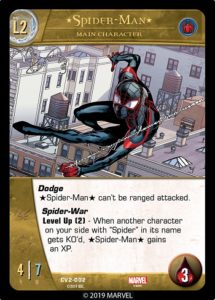 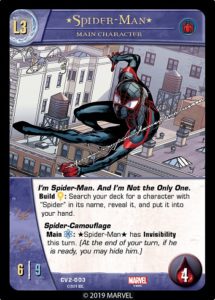 Although he doesn’t have Spider-Verse himself, he likes to multisurf! It sort of rhymes!

Just like with Spider-Verse, any main characters you add do count toward your total of 60 cards in your deck.

And remember, if *Spider-Man* gets KO’d, you’re not out of the game if you have at least one other main character on your side.

For his Level 2 Spider-War Level Up power, note that he will gain an XP when a “Spider” main character on your side is KO’d (even though main characters don’t stay in the KO pile when KO’d).

We hoped you enjoyed today’s look at the Crossover 2019 Issue as well as the previous previews! Join us in 2020 for more friends, more enemies, and more fantastic Vs. System® 2PCG® previews!

Look for Vs. System® 2PCG®: Crossover Vol 2 in stores this December.