Hello everyone, welcome to our fifth and final set of previews for the upcoming Vs. System® 2PCG®: The X-Files Battles, a Giant-Sized Issue of 200 total cards!

Let’s start off with a couple whose bark is worse than their bite: 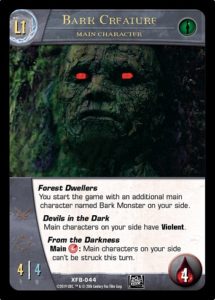 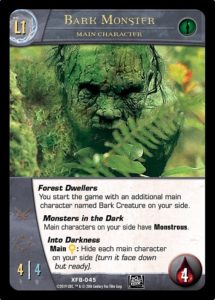 For a quick reminder –

Violent: While attacking a Supporting Character, this character strikes with double its ATK.

Monstrous: While this character is defending against a melee team attack, it strikes back against each attacker.

Now for someone that will lightning the mood: 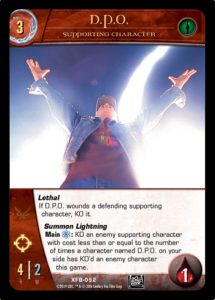 Summon Lightning works like this. Count the number of times a character on your side named D.P.O. has KO’d an enemy character this game. It could be by striking an enemy or by previous uses of Summon Lightning. Once you have that number, choose a Supporting Character with that cost or less and KO it.

Next up is someone with an infectious personality: 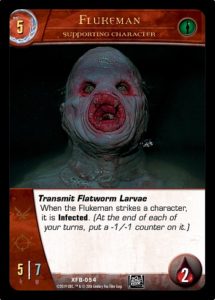 I wish I could show you this next Supporting Character. If only wishes came true… 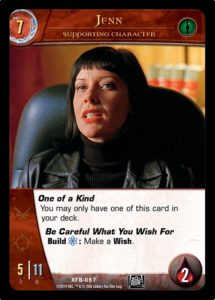 If Jenn is in your deck, you start the game with a Wish pile. When you make your deck, choose three different cards and put two copies of each of them into your Wish pile. Here are the rules for which cards you can choose:

During setup, put your Wish pile out of play and face down. It’s a private pile. (you do not need to show your opponents what’s in it, but you can look at it at any time.)

When you make a Wish, remove both copies of any card in your Wish pile from the game, and choose an enemy player. While those cards are removed this way, you may play one and that player may play one.

If the cards are Equipment or Plot Twists both of you may ignore any team affiliation play restrictions on them. If a card would be put into a KO pile, it goes to its owner’s (your) KO pile.

Now let’s take a look at a card you might want to wish for: 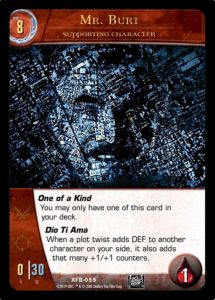 For our final preview, here’s a Plot Twist that doesn’t grant DEF. It grants a whole new person instead. 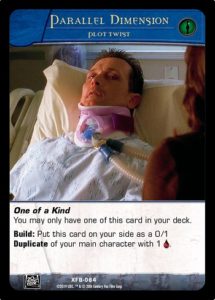 A Duplicate has all the same printed characteristics as your Main Character – name, team, current Level, and powers with an ATK/DEF of 0/1 and 1

– plus it has Swarm and it can’t gain XP, can’t Level up or Level Down, transform, or otherwise become a different card. When it’s KO’d it will go back to being the Parallel Dimension Plot Twist in your KO pile.

Note: If you have more than one Main Character when you play this, choose one to make a Duplicate of.

We hope you enjoyed this final preview of the Vs. System® 2PCG®: The X-Files Battles! Have a monstrous week!