Welcome back everyone to the second preview for the 2019 Crossover Issue for VS. System® 2PCG®! This Issue features new cards for eight teams previously featured in the game. Today we are going to look at a new cycle of cards that can only be in your deck if your starting main character has a certain team affiliation. There are cards of this type in the Issue for seven different teams. Note that if somehow you have more than one starting main character (like Devil Dinosaur and Moon Girl), only one must have the required team affiliation. 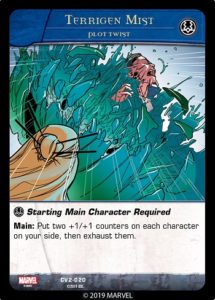 Looks painful. Note that the counters are placed on all your characters, including your main character (and even if they were already exhausted). 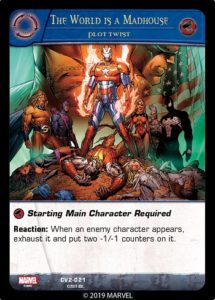 Remember that Reaction means that you can only play this card only after its trigger – in this instance, when an enemy character appears.

There aren’t just Starting Main Character Required plot twists though. This next old man was lost in the wilderness, but now it looks like he has found a home at S.H.I.E.L.D. 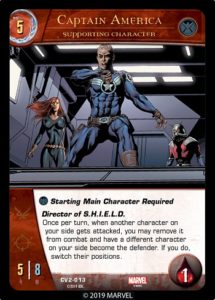 Speaking of S.H.I.E.L.D., what would it be without its Dreadful nemesis, Hydra?! Nought, I say! 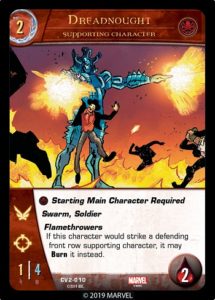 A little bookkeeping about this guy:

Swarm: You can have any number of characters with this name on your side. This power can’t be turned off.

Soldier: When this character appears, put -1/-1 counters equal to the number of Soldiers on your side onto an enemy supporting character. (Hydra happens to have a lot of Soldiers.)

Burn: When a character on your side Burns another character, that means “At the end of each of your turns, stun that character.” This will last until the character that is burning leaves play.

Phew! Quite a lot packed into that giant deadly robot!

These cards are all well and good. But let’s get to the mind event! 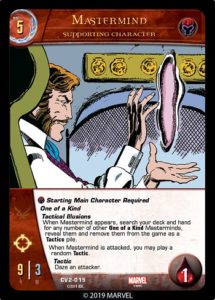 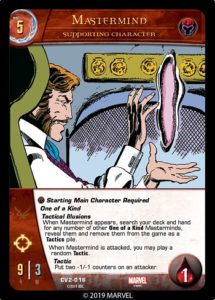 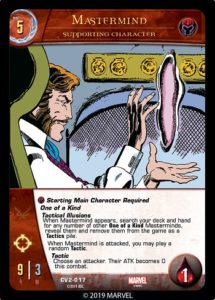 Well. Let’s dive into how he works.

When Mastermind appears, you’ll create a Tactics pile made of any number of other Masterminds you have in your deck and hand (as he says on his cards).

All players can look at your Tactics pile at any time (it’s public).

When Mastermind gets attacked, you may choose to play a random card from your Tactics pile. If you do, follow the instructions under its Tactic. Then put the card into your KO pile.

When Mastermind leaves play, leave your Tactics pile where it is (a player can only have one Tactics pile at a time). Later, if Mastermind appears on your side again, and you can (and want to) add more Tactics from your hand or deck, add them to your existing Tactics pile.

Note: One of Mastermind’s Tactics sets an attacker’s ATK to 0 this combat. That character can still gain ATK later in the combat.

We did it! Reading is fun! You didn’t read it, did you?

(By the way, we’ll award a billion super awesome points to anyone who can tell us the inspiration for this design!)

Join us here on the world wide Web next time for our third and final preview for Crossover 2019 for the Vs. System 2PCG!

Look for Vs. System® 2PCG®: Crossover Vol 2 in stores this December.