Hello everyone! The previews for the 2019 Crossover Issue for VS. System® 2PCG® have started! This Issue features new cards for eight different teams previously featured in the game. For our first preview we are going to take a look at a promise we made you in the Black Order Issue. 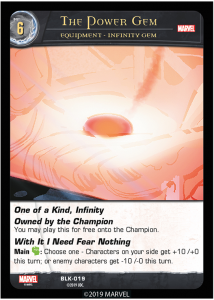 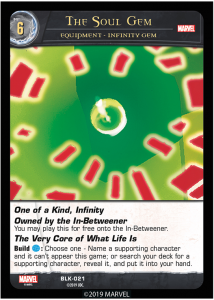 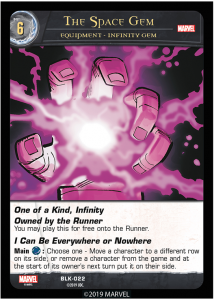 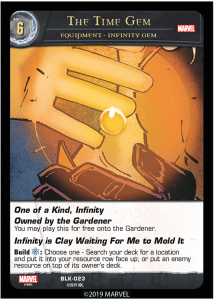 In his quest for the Infinity Gems in the comics, Thanos took each Gem from its previous owner.  At the time we printed the Gems for Vs. System 2PCG, we only had two of these previous owners in our game; The Collector and The Grandmaster. But that all changes now! 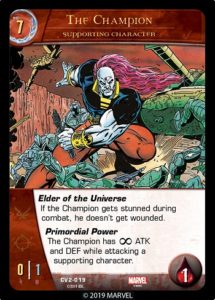 ∞ ATK means The Champion will always have enough ATK to stun a defender and his ∞ DEF will always be high enough to avoid getting stunned by a defender’s strike. Although if somehow, the defender also has infinite ATK and DEF, then both characters will get stunned. (In other words, infinite ATK is treated as equal to infinite DEF which results in a stun. It’s maths.)

Who else we got? Oh, another Elder!

He’s must have more than a green thumb. He must have a whole green house!

Our next card isn’t a gold medal winner, but he’s a golden man! 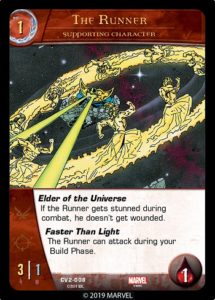 The Runner is so fast he can actually attack during your Build Phase. But you can still recruit characters and equipment after he attacks. (You could even recruit another copy of The Runner and attack with it!) Please note that a Build Phase combat does count as a regular combat so Combat super powers and plot twists (and power ups) can be used during a Build Phase combat by both players. However, during the combat you can’t use any Build super powers and plot twists.

Our last preview today is the only previous Gem owner who isn’t an Elder of the Universe. But don’t worry, he’s got his own stuff going on. 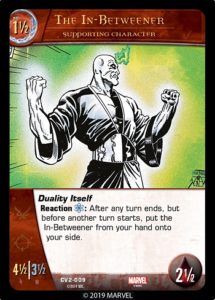 Duality Itself lets you put the In-Betweener onto your side between two turns of the game. You can even do this after an enemy player’s first turn but before your first turn.

His stats work like this: 1 ½ cost means you must pay 1 ½ recruit points to recruit him. So you will have half a recruit point leftover. (You could use this to help pay for another In-Betweener! But it doesn’t do much else right now!) 4 ½ ATK means his strikes will stun a 4 DEF or lower character but not a 5 DEF or higher character. 3 ½ DEF means if he is struck with 3 ATK or less, he won’t get stunned, but if he gets struck with 4 ATK or more he will get stunned. 2 ½

means 2 wounds won’t KO him, but 3 wounds or more will.

Well, that’s a weird way to end it! So until next time, when we look at some cards that can only be played in particular types of decks!

Find Vs. System® 2PCG®: Crossover Vol 2 in stores this December.