No parent should ever have to say goodbye to their child before their time, but such was the case for Greg and Sue Wood who had the terrible experience of losing their daughter Sydney to a brain tumor just 24 hours after she was on the soccer field scoring a goal with her friends. Her tragic passing really challenged the Wood family, but also their community who were shocked by the loss of this 11-year-old who was seemingly full of life.

To keep their daughter’s memory alive and to help other families dealing with this insidious disease, her family started the Sydney Wood Purple Butterfly of Hope Foundation in 2014. Greg and Sydney actually collected cards together and she loved finding players from her local teams in packs. Her dream was to play for a WNBA team and have her very own trading card one day.

Upper Deck has been a passionate supporter of causes tied to pediatric brain cancer over the years. Heroic Inspirations cards created by Upper Deck for young athletes who have persevered in the face of this terrible disease have helped to raise well over $150,000 for charities tied to finding a cure and improving the quality of life of youngsters fighting the disease. The stories of kids like Jack Hoffman, Lauren Hill, Jack Miller, Daniel Alexander and others are rather incredible and each of these youngsters are more than worthy of the trading card Upper Deck created for them.

Greg Wood was obviously familiar with Upper Deck and when he heard about one of these stories he thought to himself, “What about my daughter?” When he approached us and told us Sydney’s story, it was never a matter of if we would create a card for her, but how to do it in the best way possible. We worked together for several months and decided the best place to debut Sydney Wood’s Heroic Inspirations card would be at the 2019 Fall Sport Card & Memorabilia Expo. The Wood family doesn’t live far from the venue in Hamilton, Ontario and we agreed to donate some of our booth space to the charity so they could distribute the cards as a gift with donation. 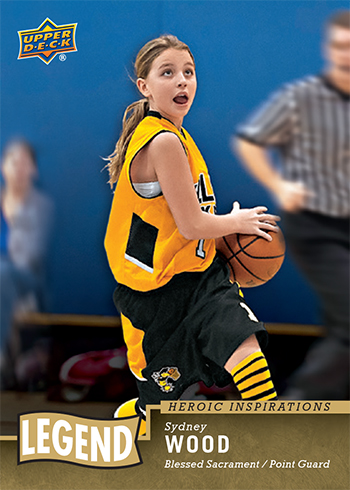 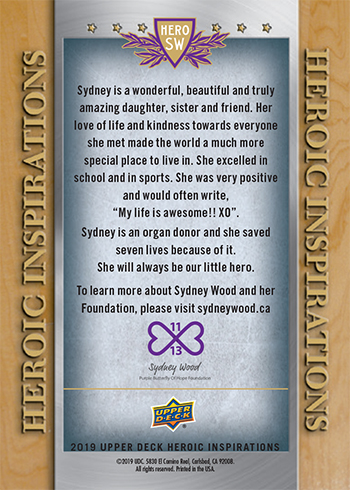 When Jeff Dotseth from Upper Deck got on stage at the show and revealed Sydney’s card to the family, there was hardly a dry eye in the house. It was an extremely emotional moment, but an exciting one as well for the family to see their daughter going up for a lay-up on the court with this oversized card. 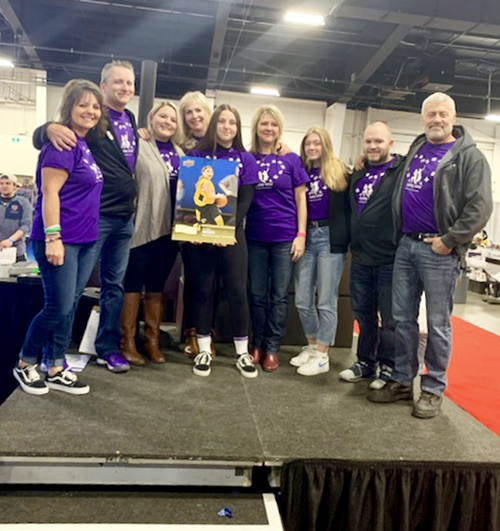 Fans in attendance were incredibly generous and quite a bit of money was raised for this admirable cause over the weekend at the show.

“The weekend was so very emotional for us,” said Greg Wood. “When we saw Sydney on her own card we were actually speechless. There are no words to describe it. We were just unbelievably proud. We are beyond thankful to Upper Deck for making this happen. Sydney will always be our hero and now the world can see our beautiful girl and know her story.” 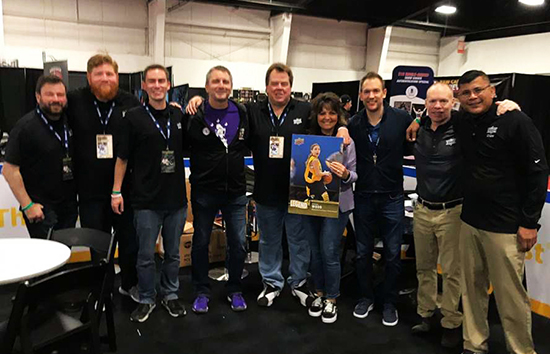 Upper Deck staff loved working with the Wood family over the weekend helping to promote the card.

Soon Sydney’s card will be added to the Wall of Inspiration at Upper Deck’s corporate headquarters. She will join many of the other athletes Upper Deck has paid tribute to over the years. The Wood family is making plans to visit California and come see Sydney on the wall in the future, taking comfort in the fact that she’s not really gone if her memory lives on.

Looking to get your very own Sydney Wood Heroic Inspirations card? Reach out to the organization on the Contact Us page of their website or email Greg directly at greg.wood@sympatico.ca. 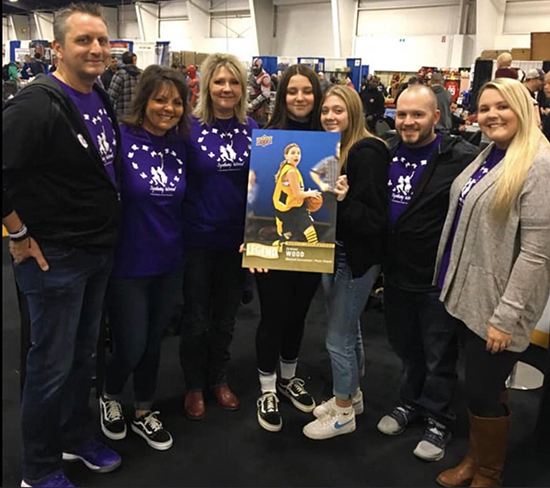 At Upper Deck we feel like we are in a place of privilege where we can leverage the power of our brand to help improve and change lives. Sydney was an incredible addition to our roster of incredible athletes, but our work is far from done. We will be sharing a new inspirational athlete around the 2020 NHL All-Star Game so look for details on that awesome story coming soon!