Hello everyone, welcome to the second day of previews for our upcoming Vs. System® 2PCG®: The X-Files Battles, a Giant-Sized Issue of 200 total cards!

Today we’re going to look at the second main theme for the Issue: “Life and Death”.

I know what you’re thinking. Death is omnipresent throughout the game already. It is a combat game,  after all. Well, we turned it up a notch in The X-Files Battles.

Who deals with death more than anyone? Doctors, of course. Well, undertakers maybe. But let’s stick with doctors. 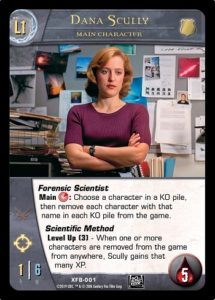 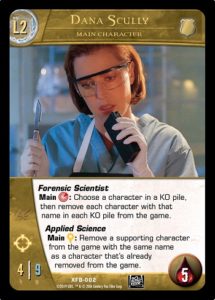 Note: “With that name” includes each card with that name even if the cards are not copies of each other. It also includes characters who have that name granted with AKA.

But Scully isn’t all doom and gloom! She’s a healer too! 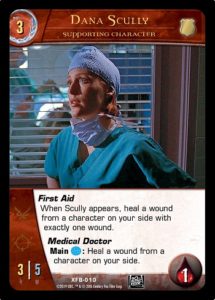 Ironically, as she only has one printed

, this physician can’t normally “heal thyself”. But medicine is one ancient profession, so you never know!

Enough of this do-gooder. Let’s take a look at some less moral characters that have to do with life and death. 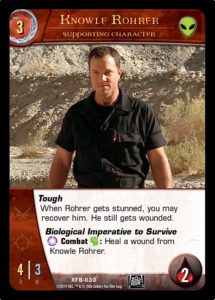 Selfishly, he only heals himself. Typical. Here’s a similar ‘guy’. 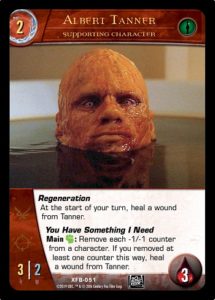 He eats cancer. I guess that’s good. I mean, he kills the people first, so probably not.

Well, that’s the most ‘positive’ power we can expect from the Syndicate or the Monsters of the Week. Here’s some more darkness. Yay? 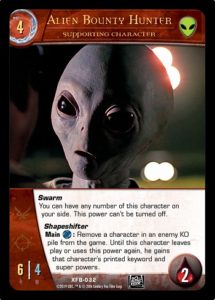 These Bounty Hunters often kill someone and then transform into them to infiltrate an enemy group.

You probably noticed that Shapeshift uses the

basic Locations in this Issue and hence, that they are now available for future characters in the Photographic Universe? No, but soon, we’ll explain it all.

This next guy is deceptive as well, but in a more normal, human way. 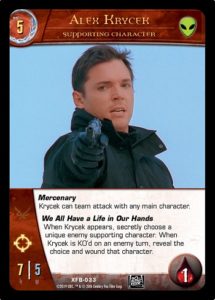 To secretly choose a character, we suggest writing it down. Or text it to yourself. Or take a picture when your opponent isn’t looking. Or get a tattoo.

For We All Have a Life in Our Hands, a unique enemy Supporting Character is one without Swarm. If that character leaves play before Krycek is KO’d, later copies of it don’t count. And lastly, note that you can wound a stunned character. (Don’t worry, Krycek fans. Although you should be ashamed of yourselves, we’ll see more Krycek soon.)

But the poor Monsters of the Week! Don’t they seem naturals for a theme of “Life and Death”? They might evoke this theme better than anyone! 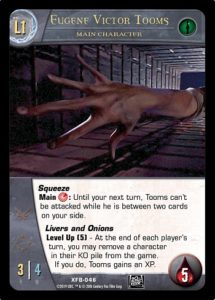 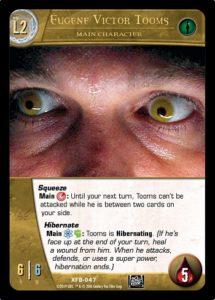 Life and death! Well, death then life, and it’s horrible, but still!

A couple notes about Eugene:

We made it to our last card for the day. Its name is evocative of perhaps the most famous character related to the theme of life and death. 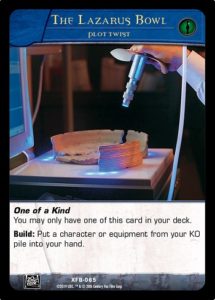 We hope you enjoyed this somewhat dark look at more cards for our upcoming Vs. System® 2PCG®: The X-Files Battles Giant-Sized Issue! Join us next time as we delve into the labyrinthine recesses of…the Bureau!