As an Experience Industry Management Major at Cal Poly San Luis Obispo, I have found a strong proclivity toward my classes focused on event logistics and experience design. Having the opportunity to work at Upper Deck this summer has given me incredible exposure to event logistics, ranging from large scale entertainment conventions to more intimate athlete signings. One of my larger projects this summer was managing the street team for Upper Deck at 2019 Comic Con in San Diego.

Upper Deck hosts a booth at Comic Con each year, and I was lucky enough to work under the company’s Event Manager, Sarah Martin, to learn first-hand on how to make an impact at this show. I quickly came to realize the level of organization it takes to pull off an event of this caliber, probably somewhere between seeing Sarah’s never ending and constantly growing “To Do List” and the moment I stepped into the buzzing convention center to help set up the booth. 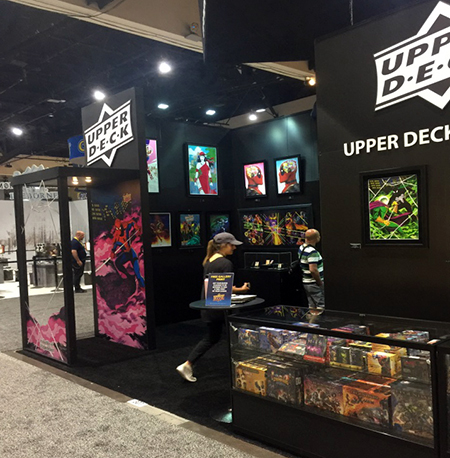 My main focus leading up to the event was organizing a street team to represent Upper Deck and engage with fans outside the main hall. Comic Con’s influence and attractions now reach well outside the main hall and it draws in hundreds of thousands of spectators and fans. Through my interactions over the span of the five day event, and managing the street team, it became evident that what makes this event so special is the energy from the people flooding downtown San Diego. From the diehard Comic-Con enthusiast who’s been attending for years, to the curious civilian who wants to experience the hype, the Upper Deck street team was able to make thousands of connections and great memories for fans over the course of the event.

We looked for high energy, positive, and engaging people to make up the team and embody the company. It was hard to miss our street team, standing out in neon pink Deadpool shirts. 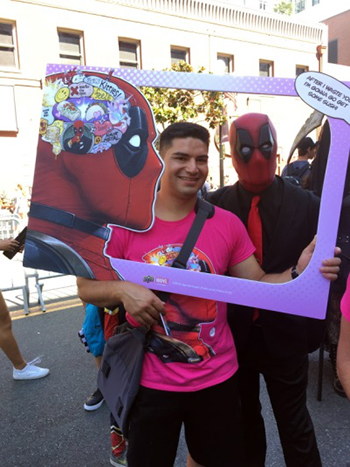 Pictured above is Esteban Sentano, whose positive energy was contagious and perfectly matched the enthusiasm of the convention attendees and passersby. There were an incredible number of people dressed in full Deadpool costumes who were beyond excited to pose with the photo opp. The cutout featured interchangeable word balloons, featuring quotations including “Outta my way nerd,” “Do it for Deadpool,” “Chimichanga,” and “After I waste you I’m gonna go get some sushi.” This interactive option not only further generated engagement, but made a lot of people laugh and overall added to a positive experience for everyone. It also added to the viral and sharable nature of the photos fans took. 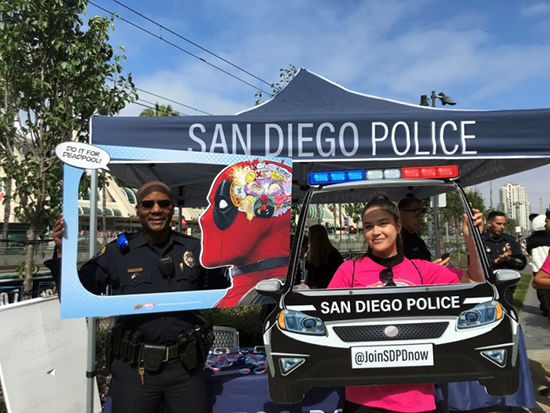 The community filling the streets of the Gaslamp District ranged from street performers to activists to law enforcement. The inviting energy of the street team pulled all different kinds of people in for the photo opp, including a trading of cutouts with the San Diego Police Department pictured above.

On the fifth and final day of Comic Con, I had a complete understanding of the best places to be positioned, where to find the shortest entry lines at the convention center and where to find the best tacos in the Gaslamp District. On a more serious note, I had certainly learned so many things from an event logistics standpoint. I’m so thankful for this opportunity at Upper Deck to jump right in and see an event come together from start to finish, bumps in the road and all.

Later that summer I worked on the largest sports collectors convention known as The National. It took place in Chicago and Upper Deck was looking to do something innovative and new to help drive sales at the show, while creating a fun experience with fans. They wanted to create a leaderboard for collectors opening packs, boxes, cases and purchasing Upper Deck Authenticated memorabilia at the show. The top customers would earn an invite to an exclusive Upper Deck party where they could score incredible memorabilia items, meet a celebrity guest and have fun with other collectors. 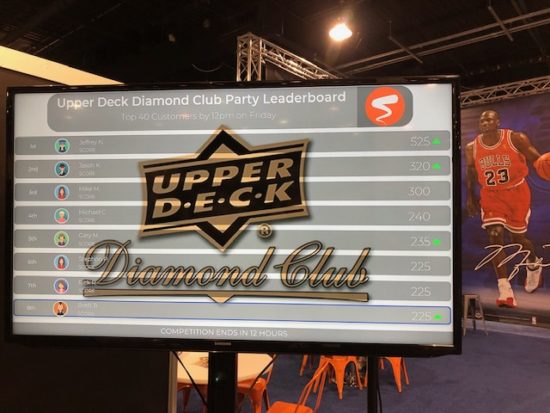 I worked with a variety of vendors to find the best leaderboard service possible and we did a lot of testing to make sure the team could handle it on site. Anything you try something new at an event, especially involving technology, can be tricky. I’m happy to report our planning helped it go off without a hitch and it was one of the best received promotions the company’s had at the event in thirty years!

One of the biggest key takeaways I gathered with all the events Upper Deck runs was that things do not, and will not, go perfectly at large events such as Comic Con. As Sarah often said, “the best laid plans…” My experience at Upper Deck taught me many things about being a part of a team, learning by doing (that one was for you, Cal Poly), and approaching things from a refreshed, creative perspective. I will definitely miss all of the incredible individuals I’ve been so lucky to get to know this summer, and am so grateful for all of the experiences I get to take with me! 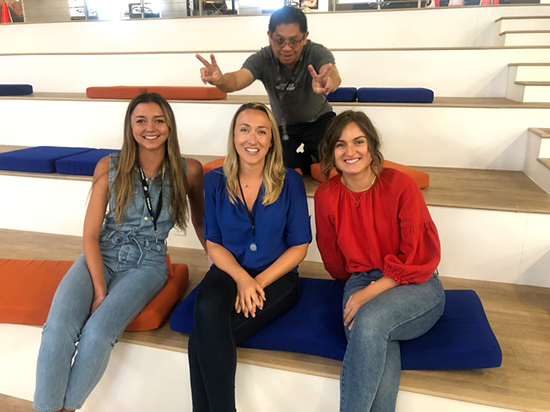 From left to right: Myself, Sarah Martin (Events Manager), Steve Tran (up top – Head of IT) and Morgan Muat (Marketing Coordinator)