Welcome VS.System® 2PCG® True Believers! Today we have our first preview cards for the second Issue in the new Assemble Arc (based on the Infinity Stones): Space & Time. This Photographic Universe Issue features intergalactic heroes and villains in the MCU. Here we go!

First up, we have Ronan’s right-hand man. 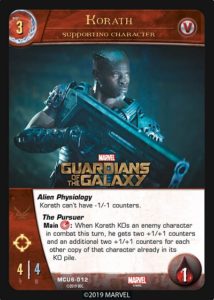 Speaking of big guns, here’s a guy who doesn’t use ‘em. 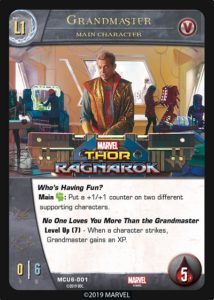 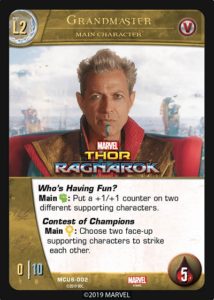 Again, the characters in the Contest of Champions can be from any side, and they can be from two different sides. He’s a devilish one.

Let’s stick with Thor’s enemies for a bit, shall we? 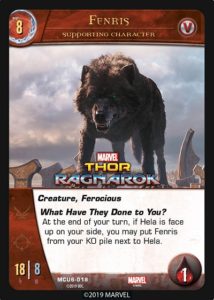 Oooh, he’s a good one for Contest of Champions! Here, boy!

There’s an even more expensive character in this Issue. And he’s bringing the end of the world. Well, Asgard, at least. 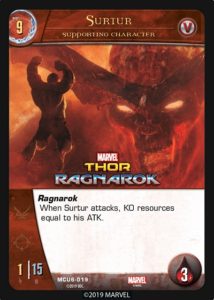 That image! It almost takes the sting out of Asgard being destroyed.

Note that Ragnarok triggers right when Surtur attacks. There isn’t time to play a Plot Twist or use a Super Power to increase his ATK. You’ll have to do that before he attacks. However, other effects that trigger when a character attacks can be ordered to increase his ATK before Ragnarok resolves.

Also, please note that he doesn’t really care whose resources he KOs. If there are no enemy resources for Ragnarok to KO, you’ll have to KO ones on your side.

Speaking of Ragnarok, there couldn’t be one without an Asgard to destroy. And what is the most iconic thing about Asgard? 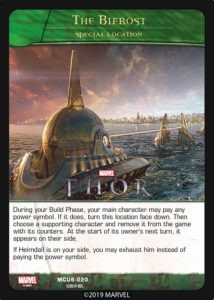 Boy, Surtur would love to get that one!

That’s gonna do it for today’s previews! Join us next time for some good guys to balance out these villains!