Welcome Vs. System 2PCGers! Today we have our third and final set of preview cards for the second Issue in the new Assemble Arc (based on the Infinity Stones): Space & Time. This Photographic Universe Issue features intergalactic heroes and villains in the MCU. Today we are going to see Thanos and company, and what a company they are! 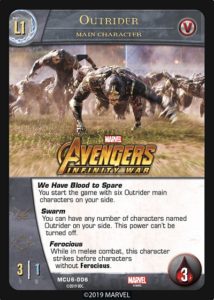 That started out with a bang! Let’s scale it back a bit to cards that only come out one at a time. 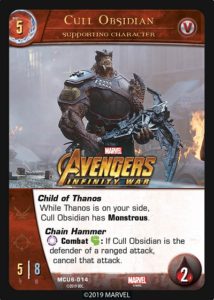 Monstrous means that he strikes back against each enemy team attacker attacking him in a melee combat.

And he’s not the only Child of Thanos, of course. 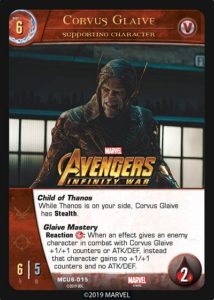 Stealth means he can melee attack back row enemy characters, even while they’re protected.

His Glaive Mastery is a Reaction which means he can do it after a certain trigger – in this case, when an effect gives an enemy in the combat with him +1/+1 counters or +ATK or +DEF. If he uses this power, he stops that from happening. The power doesn’t stop other parts of the effect, just the counters and the gains of ATK and/or DEF.

Now where is that odd willowy one? 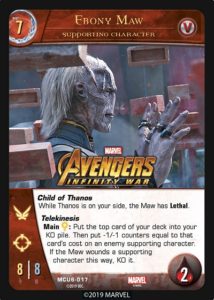 Oh great. There he is. Note that when he uses Telekinesis you can choose who to put the counters on after you see the card.

There is one more Child of Thanos, but you’ll have to wait to see her as she’s in the next Issue.

Now here comes the daddy of them all! Thanos appeared in an earlier set, of course, but before his final plan had come to fruition in the films. Here are those cards: 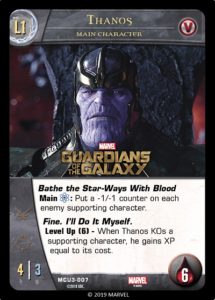 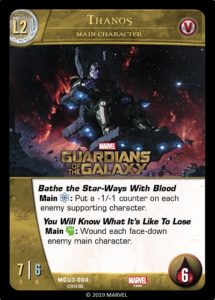 Now when he levels up, he has another choice for his level 2. 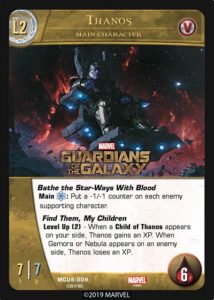 But is it worth it? 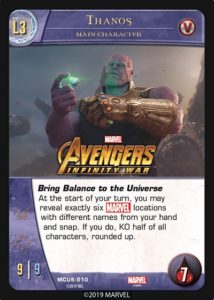 It just might be! Note that Thanos would have to be face up at the start of your turn for this power to trigger, of course, like any start of turn power. And that you read it correctly, you get to choose which characters to KO. If there are an odd number, KO one more than half. Thanos seems like a round up sort of guy to us!

Thanks for joining us this time. Come back next time as we preview cards from the third and final Issue in the Arc: Mind & Soul!


I know the cards are already printed and it’s pointless to mention this, but the guy pictured on Cull Obsidian is Black Dwarf. Cull Obsidian is the name for the group of powerful henchmen that obey Thanos.