Vs. System 2PCG: Space & Time Card Preview – An Oldy But a Goody

Welcome VS. 2PCGers! Today we have our second set of preview cards for the second Issue in the new Assemble Arc (based on the Infinity Stones): Space & Time. This Photographic Universe Issue features intergalactic heroes and villains in the MCU. Off we go! 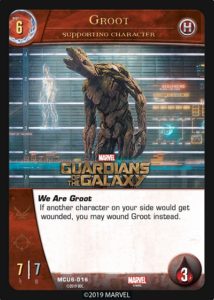 Everyone’s favorite tree-like being is here! His later (and different) version appeared earlier in the game as Baby Groot, but this is the O.G. – Original Groot. You can’t use either to power the other up.

So I mentioned that we would have good guys in this article to balance all the evilness from the last one. That’s only half true with the next two fellas. 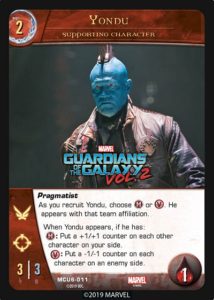 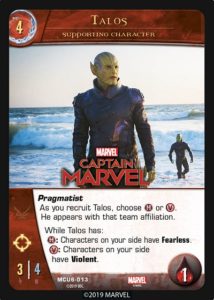 You get to choose their team! A few notes: They don’t have any team affiliations until your recruit them, and if they appear on your side without being recruited, they will still have no team.

Talos’s Pragmatist affects all characters on your side (including him) regardless of those characters’ team affilations.

That’s not all we’ll see of Talos! 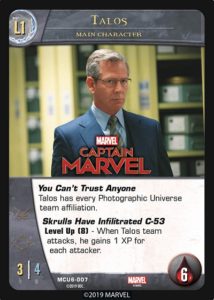 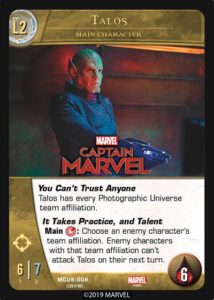 All these young whippersnappers are great, but where is an actual O.G. – Original God? 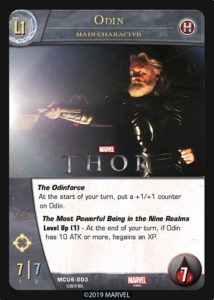 Whoa. What a master. And then he levels up to become even more powerful? What??!?! 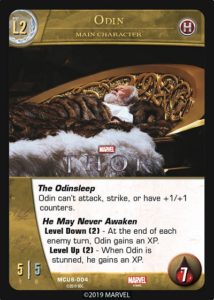 I see. Well, everyone gets sleepy sometimes. Note that when he becomes Level 2, as he can’t have +1/+1 counters, any from Level 1 will fall off.

And what the heck is Level Down? It works a lot like Level Up. From the rules:

Power, except instead of gaining XP which advances it to a higher level, it gains XP which regresses it back to a lower level. When a character gains Level Down XP, put an XP counter on its Main Character card that is one level lower than its current level. If a character has both a Level Up and a Level Down Power, it’s possible for it to gain and have both kinds of XP. However, once it levels up or levels down, all of both types of XP will be removed.

Here’s an example of how Odin works: Odin actually starts off as his most powerful self at Level 1. But after a few turns of gaining power through The Odinforce (or other means) he’ll level up and then take a nap. While he’s asleep he can gain both Level Down XP and Level Up XP. If he gets two Level Down XP, he’ll wake up and level down back to Level 1, and both kinds of his XP will be removed. But if he gets two Level Up XP instead, he’ll level up to Level 3 and realize his time has come.

Whew. That’s a lot of words to basically say it works the same as leveling up but in the other direction.

And if Level 2 Odin is sleeping Odin, how bad can Level 3 be? 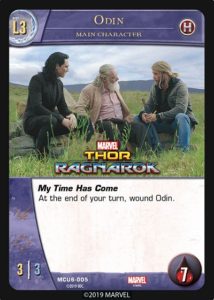 Oh, pretty bad. Well, he had a good run.

So, we could have designed Odin to start at Level 3 and Level Down right away. That sort of makes sense. But that has costs, the largest being that starting at Level 3 is so different and unintuitive that it would have to be communicated on both the Level 1 and Level 3 cards.

We hope you enjoyed this look at some (mostly) heroic MCU characters we’re adding to the game. Next time is gonna get dark again, as there is a Mad Titan still on the loose.