Vs. System 2PCG: Mind & Soul Card Preview – To Infinity, and the Quantum Realm

Welcome Vs. System® 2PCG® fans! Today we have our second preview cards for the third Issue in the new Assemble Arc (based on the Infinity Stones): Mind & Soul. This Photographic Universe Issue features powerful female heroes and villains in the MCU (and their fraternal twins, if applicable). It features a massive eight new main characters to play (nine if you count that twin – you’ll see later). Let’s get to it! 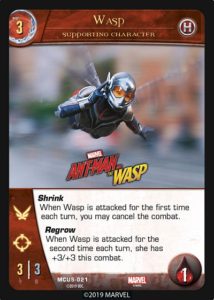 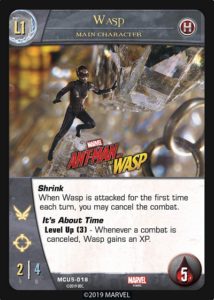 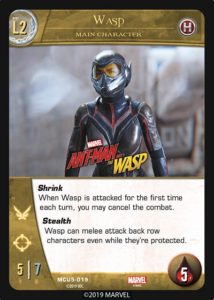 We started off small. How about something bigger? 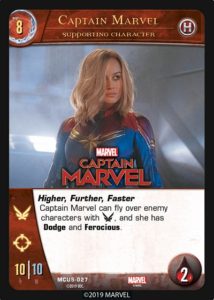 Finally Nick Fury has more than one way to gain XP, albeit an expensive way!

Carol’s Higher, Further, Faster lets her attack enemy back row characters, even if there are enemy characters with

in that enemy’s front row. And of course, Dodge means she can’t be ranged attacked, and Ferocious means that in melee combat she strikes before other characters unless they have Ferocious. Who wants to mix it up with her? Not Me, I’m a 4/3 with no powers! 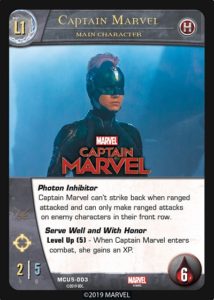 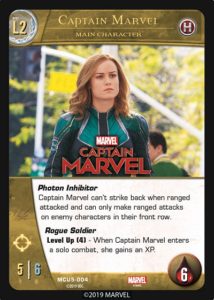 These two cards are similar but not quite the exact same. At Level 1, she is still part of a team, but at Level 2, she has gone off on her own, looking for answers. Note that for both Level Ups, she can gain XP on any turn, and that a solo combat includes one attacker and one defender.

She has a drawback on her Level 1 and 2 cards (the Inhibitor). Will she be able to… 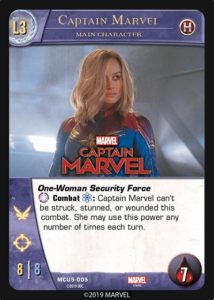 Having seen it twice, Carol is the true hero of the movie.  But she had a great “supporting” cast! 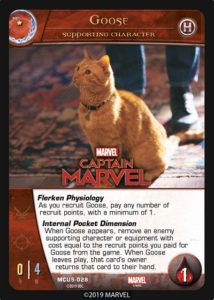 And now Nick Fury has all three ways to gain XP! Good kitty!

Note that if an effect needs to know Goose’s cost, treat it as 0 (regardless of how many recruit points you paid). Also note that if Goose appears without getting recruited, her Internal Pocket Dimension can only remove a Supporting Character or Equipment with 0 cost.

We hope you enjoyed our second look at the Issue. Come back next time as we finish up our previews for Mind & Soul!

The Assemble story arc concludes this October with Vs. System 2PCG: Mind & Soul.